The Ram, the Triangle and The Pleiades

This month we will continue our exploration of the “spaces in between”. Underneath the long line of stars that constitute the constellation Andromeda lie two small constellations: Aries and Triangulum. Although rather faint, the relative distance of these constellations from the crowded star fields of the Milky Way makes their star patterns surprisingly obvious.

Triangulum is actually like a triangle but the brightest star is 3rd magnitude ? Trianguli, not Alpha which is actually half a magnitude dimmer. The Romans knew the constellation as Sicilia since it reminded them of the island of Sicily. Its most famous object is the ‘Pinwheel Galaxy’ or M33 /NGC 598. Its name well describes the Galaxy’s appearance in larger telescopes, being that of a sweeping S shape with a bright core and fading arms. It is a member of our local group of galaxies at a distance of 2.4 million light years from us. The arms are rotating clockwise, and the whole system travelling towards us. This galaxy is well known amongst amateur astronomers as being difficult to locate due to its low surface brightness and large angular size. An instrument that yields a wide field of view and low magnification is best, preferably at a very dark sky site. Line up ??Andromedae with ? Andromedae and travel southeast for double the distance between the two stars. Look for the very subtle Grey glow against the black background. Good luck! 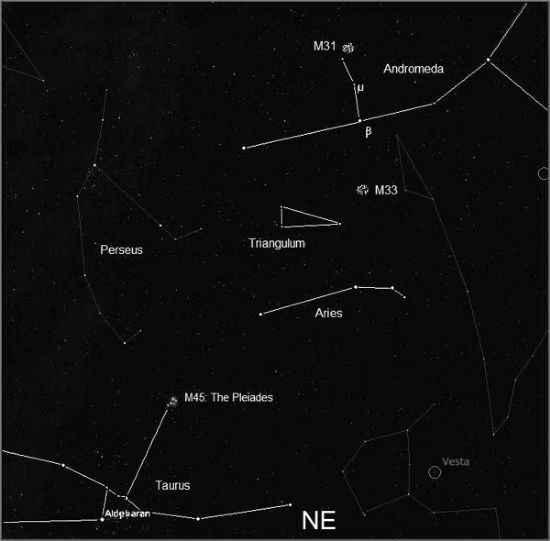 Our second constellation is Aries, the Ram: an animal held in high regard in ancient societies. Aries is closely associated with the legend of Jason and the Argonauts. The legend goes that the king of Thebes was tricked by his second wife into sacrificing the children from his first marriage. The god Zeus was upset by this and sent a ram, Aries, to rescue the children. On the way home, riding on the ram’s back, one of the children, Helle, fell off and drowned at the strait called Hellespont (now known as the Dardanelles). Her brother arrived safely, sacrificed the poor ram and hung its fleece on an old oak tree, to be guarded by a terrible serpent. Jason grabbed the fleece, which was in fact the mythical Golden Fleece, and returned it to the temple of Zeus.

The third highlight of the month is the most famous open cluster in the sky: the Pleiades or Seven Sisters. This cluster, which is in the constellation of Taurus, is easily discerned as a small Plough shaped group of stars. It has always been a puzzle as to why the famous 18th century astronomer Charles Messier, in his famous catalogue, bothered to list it at all (as M45), as even then it was well known as an open cluster. Most people with normal eyesight see 6 stars, though some claim considerably more, up to 16 in some cases! It is a ‘young’ open cluster, 78 million years old, moving away from us. Glorious in binoculars or a wide field telescope, it contains numerous double stars and more than a thousand members. In even a small telescope nebulosity can be seen round 4 of the stars. Faint subtle wisps of light can be seen around Alcyone, Electra, Maia and Merope. The Merope nebulosity is sufficiently bright to carry its own designation in the New General Catalogue: NGC 1435, the Merope Nebula.

The Pleiades take centre stage on the 13th of November, when a full moon occults or goes in front of the open cluster. Because the moon is so bright the cluster will be difficult to see, but the occultation should still be visible in binoculars or telescopes from about 7.00pm onwards. Several of the brighter stars in the cluster will be seen to pass behind the Moon, and will blink out as they pass behind the Moon’s limb. Other fainter ones may be seen to ‘graze’ the edge of the Moon, perhaps peeping out from between mountain peaks – this can be a very exciting experience, and is well worth a look!