An ancient constellation and one of the twelve signs of the zodiac, Pisces can be seen at its best during the early winter evenings.

Pisces represents two fish tied together by their tails. Swimming amongst the stars in the southern part of the sky, it looks like two long threads spreading outwards in a ‘V’ pattern. The western fish lies below the square of Pegasus and is conspicous by the asterism, the Circlet of Pisces, attached to the far end of the line of stars. The eastern fish shows no such distinguishing feature although there is a faint triangle at the end of the procession of stars extending upwards to Andromeda with Aries on its left.

The fish are supposed to represent Aphrodite and her son Eros who changed into fish to hide from a very large and extremely fierce monster. This was Typhon, said to be covered in serpents and had wings so large they hid the Sun and was so tall that his head touched the stars. He had been created by Mother Earth to avenge the original gods, the Titans, who were attacked by the Olympians. However even Typhon was no match for the Olympians and he was soon chased to Sicily where Zeus picked up Mount Etna and dropped it on top of him. The mountain’s rumbling, smoke and eruptions are said to be Typhon striving to escape. 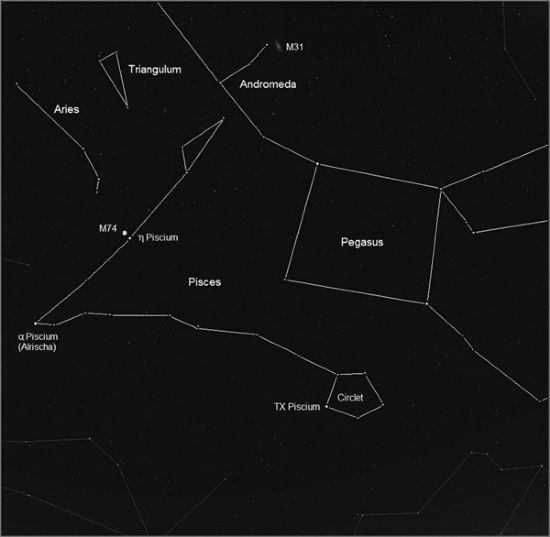 The brightest star in this constellation is ??Piscium, known as Alrischa, which lies midway between the two fish and marks the knot tying their tails. It’s actually a pair of white stars, which can be seen through a small telescope but the separation between them is decreasing as they move closer together. By the middle of this century they will be much more difficult to see individually.

Moving through the line of stars marking the western fish you will come to the Circlet of Pisces, which lies directly beneath the square of Pegasus. It consists of seven stars, two of which are quite faint. One worth looking out for?is TX Piscium. This is a star near the end of its life, which has a deep-red colour due to the abundance of carbon produced under extremely high temperatures. It is visible with the naked eye or binoculars and is one of the brightest carbon stars in the sky.

Going back to ??Piscium – the knot – move northwards through the eastern fish following an almost straight line of stars. In the middle of this line is the brightest star in the constellation, ??Piscium, which nicely marks the position of the spiral galaxy, M74, sitting just to its left. Best seen through a large telescope, it appears to have a bright spot in the centre of a misty patch. Its surface brightness is low as its light is spread over quite a large area of sky so it can be difficult to spot. It lies 30 million light years away.

Medieval tradition suggests that Pisces was associated with the Hebrew nation leading Kepler to consider it as a possible site for the Star of Bethlehem. In 7 BC there was a triple conjunction of Jupiter and Saturn in Pisces, something that occurs only once every 900 years. In 6 BC Jupiter, Saturn and Mars came within eight degrees of each other, again in Pisces and occurring only once in every 800 years. However it is unlikely that these conjunctions produced a single bright star and perhaps the only one that did was in 2 BC when Jupiter and Venus were in very close conjunction in Leo but this took place in the evening.

Other suggestions involve the idea that the Star of Bethlehem is based on Roman-era astrology. The Magi were astrologers who would not have looked for any bright stars or planets in the sky but instead would have examined the planetary patterns in a birth chart when searching for evidence for a king’s birth.

In 6 BC Jupiter rose exactly 12 degrees ahead of the Sun in the constellation of Aries, also associated with Judea. To the Magi this would have been the ‘star in the east’ heralding a royal birth.

In 3 BC – 2 BC Jupiter passed very close to Regulus, the brightest star in Leo, three times. This was considered significant because Leo is the constellation associated with Royalty; it was also very important to the Jewish people and Leo was referred to as the Lion of Judea. Its brightest star is Regulus, which means ‘King’ from which we derive the word regal and Jupiter is, of course, the King of the planets. To the Magi these events would also have suggested the advent of royalty.

So what was the Star of Bethlehem? Was it something that could be seen in the sky or was it purely based on astrology? We may never know. Historical records from so far back in antiquity are notoriously hard to piece together and it all took place such a long time ago. However, whatever it was, it was important enough for the Magi to head west to Judea looking for a very special child that was born King of the Jews.

Jupiter is still present in our skies as Christmas comes closer. Look low in the southwest and you should see two bright points of light – one is Jupiter and the brighter one is Venus forming a splendid conjunction at the beginning of December. They gradually move apart as the month goes on with Jupiter setting by the middle of the month.