Late autumn and early winter are the times for the water constellations. This month the fishy theme continues with a description of the Sea Monster, Cetus, lying below the constellations of the fishes, Pisces, and the goat, Aries.

This Cetus is linked to the Greek mythological tale of the house of King Cepheus. His queen, Cassiopeia, boasted she was more beautiful than the sea nymphs, which angered the sea god Poseidon. In response, he sent a monster to ravage their kingdom. Whether this was Draco, the dragon, or Cetus, the sea monster, is not clear. The only way for the monarchs to stop the carnage was to sacrifice their beautiful daughter, Andromeda, who was duly chained to a rock for the monster to devour. Along came Perseus, with his recently decapitated Medusa head, which had the power to turn all that looked on it to stone. Perseus fell in love with Andromeda and turned the sea monster to stone. The kingdom was saved, and everybody lived happily ever after. The monster - Draco or Cetus - is immortalised in the heavens.

Although not obvious, the constellation is easy enough to pick out. The head can be identified south west of Taurus, as an uneven circle of 3rd to 4th magnitude stars in a barren area of sky. The body of the sea monster sprawls indistinctly beneath and to the west. But for one star, Omicron Ceti, situated in the neck of the monster, the area would be of little interest. Noticed by the Dutch astronomer David Fabricus in 1596, it was first thought to be a nova, though curiously in a society where the universe was thought to be perfect and unchanging, it reappeared the next year. It took until 1638 for another Dutch astronomer, Johann Holwarda, to realise the star was brightening every 11 months. Johannes Hevelius in 1662 suggested ‘Mira’ (the wonderful) as an appropriate name for what was to become the prototype of the most numerous kind of variable star. 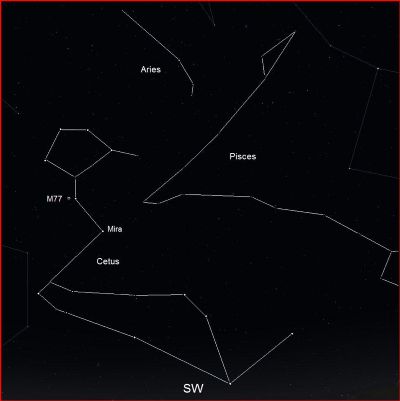 ‘Mira’ objects, of which there are 5000-6000, range between magnitude 2.5 and 10, making them perfect for amateur astronomers to observe. They have relatively stable periods, mostly between 150-450 days. Mira itself has a period of 331.96 days with brightness varying between magnitude 2.0 and 10.1, its almost yearly cycle coinciding fortuitously with its maximum visibility. Every maximum since 1638 has been seen, making Mira the most observed variable star known. The current maximum occurs at the end of December 2008 or beginning of January 2009. It has a variable peak magnitude at maximum, ranging from 2 to 5, the mean being 3.5. In 1779, however, it rose to nearly first magnitude, almost equal to Aldebaren. So although having a well-known period, Mira can be sufficiently irregular to be worth observing. It can be visible to the naked eye for a few weeks, or several months and can be seen throughout its cycle with binoculars or a small telescope.

Mira stars are highly evolved objects - red giant stars nearing the end of their lives, characterised by their very red colour. Their masses range from 0.6 to 3.0 solar masses and they have a temperature spectrum of between 1900K and 3700K. Their hugely distended atmospheres appear to pulsate due to the star expanding and contracting and this is what makes them appear to increase and decrease in brightness. Their periodicity depending on their radius and therefore on their temperature: the cooler the star the greater the amplitude in brightness and the longer the time period between the star’s greatest visual magnitude.

Mira stars have completed their hydrogen burning stage and now consist of a dense core of carbon, surrounded by a helium-burning shell and a very attenuated atmosphere. The Mira stage of a star’s life is brief, as these old stars have a limited supply of nuclear fuel and are losing a huge amount of material into space. However, this material provides a major source of interstellar dust for the formation of a new generation of stars and planets.
The Hubble space telescope has recently produced an amazing picture of a stream of matter, producing a comet-like tail extending from the vicinity of Mira. Eventually, in a few hundred thousand years (a blink of an eye in astronomy terms) Mira will become a planetary nebula, the escaped gas and dust being illuminated by the collapsed white dwarf core. In five billion years time our Sun will also become a Mira type star.

Cetus has one Messier object, M77: a spiral galaxy of magnitude 9.6 which sits 1 degree southeast of Delta Ceti, another star in the neck of the monster. This too is a very interesting object being one of only 2 Seyfert galaxies in the Messier catalogue of celestial objects (the other is the less luminous M106 in Canes Venatici). Seyfert galaxies have exceptionally bright and active nuclei, and produce spectral line emissions indicative of highly ionised gas. M77’s spiral arms are difficult to see, but its nucleus is very small and bright, almost stellar in appearance. Spectroscopic examination of the area has revealed an immense gas cloud moving perpendicular to the galactic core. The energy required to eject such a large mass has been theorised to come from a supermassive object, possibly a black hole, devouring material surrounding the galactic nucleus and ejecting the fast-moving gas cloud at its poles- like a miniature quasar. Perhaps Cetus has a monster in its depths after all?

So when you go outside in the long winter nights, look first for the head of the Sea Monster, then for the neck, for lurking there are 2 celestial giants - and one might be visible to the naked eye!