Ploughing With A Bear

Ursa Major, the Great Bear, is the third largest constellation in the sky. However, the part of the Great Bear that we all know best is the asterism that we call the Plough.

The Plough consists of seven stars and makes up the rump and tail of the Great Bear, whilst fainter stars form the rest of the animal including three pairs of stars that mark three of the Bear’s feet.

Many stories surround the Great Bear but perhaps the most often told is the one in which Callisto, a young maiden who was part of Artemis’ hunting party, was seduced by Zeus. Artemis expected all her nymphs to remain chaste and when she discovered that Callisto was pregnant she was furious and banished her.

Hera, the wife of Zeus, discovered her husband’s infidelity after Callisto gave birth to a Son, Arcas. In a furious rage she changed Callisto into a bear who then wandered the woods for years. Arcas, meanwhile, grew up and learned to hunt. One day he came face to face with his mother, but of course he did not recognise her. As he raised his spear to kill her, Zeus took pity on them both and placed them in the heavens close to one another, as the Great Bear and the Little Bear. The story goes that Zeus threw them upwards by their tails, which became stretched in the process and is why these celestial Bears have long tails when in fact real bears do not.

Many cultures have created patterns from the stars but their constellations usually differ. However, perhaps because the Plough has such a distinctive shape with its seven bright stars, it appears to be recognised by many peoples throughout the world. It is known as the ‘Big Dipper’ in the US as it resembles a large ladle, but this depiction may have originally come from Africa where it was seen as a drinking gourd. In the 19th century runaway slaves followed it north and to freedom. The American Indians interpreted the configuration as a bear with the three ‘tail’ stars as either three cubs following their mother or as three hunters tracking the bear.

In Europe the Plough is often seen as a wagon and in France is known as the saucepan. Even the Chinese knew the shape and called it the ‘Northern Dipper’. Throughout eastern Asia the shape was so well known that it was colloquially named “The Seven stars of the Northern Dipper”. In Malaysia it is known as ‘The Ladle’ and in Arabia the four stars of the ‘bowl’ are seen as a coffin with the three stars in the ‘handle’ as mourners following on behind. In Mongolia it is known as the ‘Seven Gods’ and the Hindus saw seven wise men. Even the Bible refers to the Plough as “the seven stars”. 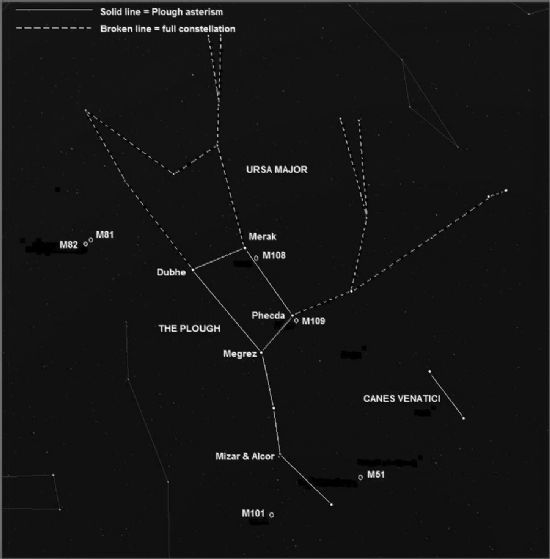 The second star from the tip of the ‘handle’ is Mizar with Alcor sitting close by. The two are separated by three light-years and are physically unrelated. To separate the two visually has traditionally been a test of good eyesight although perhaps nowadays in our increasingly light polluted world, to see the two of them distinctly is more a test of how dark your sky is.

Mizar is a muliple star with four components. Not only is it part of an optical binary (with Alcor) but is the first discovered telescope binary (in 1650). Each of these stars is in turn a double star but are so close to their primary stars they can only be detected spectroscopically. This is Mizar’s other claim to fame for it is also the first discovered spectroscopic binary (where a companion star can be only detected through changes in the main star’s spectral lines). Looking at Mizar & Alcor through even a small telescope is a visual treat!

Five of the stars of the Plough are moving together as a group through space but Alkaid and Dubhe are moving in the opposite direction. Over time the shape of the Plough will change with the bowl opening up and the handle becoming more bent.

The stars within the Plough are useful guides for finding other stars. By extending a line through the ‘pointers’ Dubhe and Merak, Polaris, the North Pole Star can be found. A line from Megrez to Phecda leads to Regulus in Leo (“a hole in the bowl will leak on Leo”). A line across the top of the bowl from Megrez through Dubhe can be extended to find the bright star Capella in Auriga (“cap to Capella). Following the curve made by the handle from Alioth to Mizar, the fourth brightest star in the sky, Arcturus (in Bootes), can be reached and by continuing the line eventually you come to Spica in Virgo (“arc to Arcturus then speed to Spica”).

There are a number of objects best seen with a telescope close to the Plough. M81 and M82 are a pair of spiral galaxies that can be seen in the same field of view. By crossing the bowl diagonally from Phecda to Dubhe and continuing onwards for the same distance, the locations of these two galaxies can be found. Forming a triangle with Alkaid and Mizar is another spiral, The Pinwheel Galaxy (M101) and a little below Alkaid, just within Canes Venatici terrority, is the Whirlpool Galaxy (M51).

The Space Shuttle Discovery blasted off from the Kennedy Space Centre on 15th March. Its primary mission: to deploy the last pair of solar panels on the ISS. The S6 solar array truss was installed during a spacewalk on the 19th March and on the following day astronauts were able to extend the solar panels. In the past there have been problems with them sticking but all went well this time. The two new solar arrays add more than 8000 sq. feet of light-collecting surface area, stretching 240 feet from one side to the other, and the whole power truss is longer than a football field. This completes the US’s power system started eight years ago when the building of the ISS began. With the panels now deployed, the ISS has become the second brightest object in the night sky after the Moon – brighter even than Venus.

This month, make the most of the shorter nights by finding not just the Plough, but also the Great Bear and the pairs of stars making up three of her paws. If you are lucky you may also spot the updated ISS along with Venus still shining brightly in the western sky.