By May, the sky’s conditions have changed quite dramatically. The sky gets darker later on in the evening and we have fewer hours of astronomical darkness in which to hunt down our targets. But it’s not all doom and gloom. The constellations of Leo and Virgo will give up their galaxies quite easily during May’s nights, and other Messier objects, like globular cluster M5 in Serpens, will be easier to find as they get higher in the sky later in the month. The downside is that you will have to wait until much later on in the night, 11pm or later, before it is easy to make them out. May is probably the last month that deep sky objects will be readily observable until the new season begins in late August.

But you are not limited just to items from Messier’s list of deep sky objects to observe.  Another “challenge” is available in which one hundred targets can be found all within half a degree of each other! And none of them are very faint either, with most being detectable in small to medium telescopes! What can I be talking about?

Well it all started in April 2004. Selenologist Charles Wood, writing in Sky & Telescope magazine, published in that edition his list of one hundred lunar features, along with an annotated map to help amateur astronomers to find and observe them. He also provided some notes on the nature of the features. The L100, as it has become known, has become very popular with people wanting a relatively easy observing challenge that can be completed as and when time allows. It is not only a simple checklist though, as one of the intentions of the list is to give a basic understanding of how these different types of features were formed on the Moon.

The list includes maria (the plural of ‘mare’), walled plains, domes, mountain ranges, impact basins and solitary mountain peaks as well as the more common craters. The L100 information sheet has basic information about many of the different features, and much more can be found out about them on the Internet or in the pages of your favourite Moon-book. Personally, I recommend the “Atlas of The Moon” by Antonin Rukl, or Peter Grego’s “Moon Observer’s Guide”. The regular monthly astronomy magazines all have lunar sections in them too, so further details can be gleaned from them.

The information sheets and map can be found at the website of the magazine that first published the L100: Sky and Telescope magazine, at www.skyandtelescope.com. Simply type “lunar 100” into the site’s search box. It is also available from the Highlands Astronomical Society website at www.spacegazer.com – simply navigate to the Documentation page and download them in pdf format.

And finally, what are the advantages of this little project? Well, the Moon is quite easy to find – although perhaps not always as easy as you might think! At the moment the Moon is quite high in the sky during the night, but in summer it will be lower down. This is due to its passage along the ecliptic – a line that passes through the zodiac constellations and shows the path that the Sun and planets (including Luna) take across the sky. The ecliptic is high during the day and low at night during the summer and this is reversed during the winter; thus in the summer months the Moon will be lower in the night sky but higher in the sky during the day.

The Moon can be observed in the daytime, during the afternoons when the Moon is waxing from New to Full; and when it is waning (passing from Full to New again) in the mornings after the Sun has risen. Some of the features will be visible under both types of illumination, and they can appear shockingly different when the light is coming from a different, unexpected, angle.

Although all one hundred features are readily noted on the map, it can take some time and experience to find them all at the eyepiece of your telescope. Be prepared to take your time and consult any other more detailed Moon maps you may possess. The process of seeking, finding, then observing, is hugely rewarding and will hopefully improve your knowledge of the geological processes that created these visual highlights on the surface of our closest celestial neighbour. 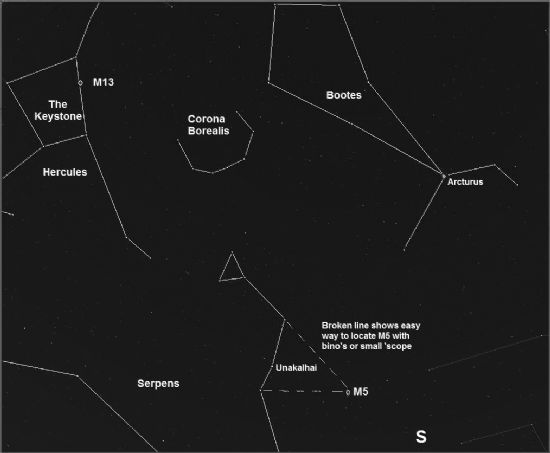 In the first paragraph, I mentioned M5, a globular cluster in Serpens. It is certainly a nice globular cluster to view, being magnitude 5.8 and relatively easy to find in small telescopes or binoculars. Now, there is another excellent globular cluster to observe in a nearby constellation: M13, known as the Great Cluster, in Hercules. It is interesting that the two globular clusters are very similar. They are similar in brightness, with M5 being just a tad brighter at 5.6 than M13 at 5.8. They are both situated at roughly the same distance from us: about 25,000 light-years; and they both have a similar surface area when we view them: approx. 23 arc-minutes. In reality, M5 is slightly larger at about 165 light-years across, compared with M13's 145 light-years.

Both are very fine and interesting targets to view in any size of telescope, and I have to wonder why M5 is so seldom mentioned in observation reports, whereas M13 is one of the most observed clusters of the northern sky. I suppose it must come down to M5’s position in the sky, and the fact I mentioned at the beginning of this piece: it doesn’t get dark until very late during the summer months, and it’s during the summer months that M5 is highest in the sky! When August comes round again, M5 will be skirting the horizon once again, and M13 will again, predictably, be taking all the glory at the expense of M5. If you get a chance, if you can stay up late, and if you can endure the midgies, please help to redress the balance and enjoy a view of another spectacular globular cluster while you have a chance.