The Upside Down World of the Southern Hemisphere

At this time of year, from our northern latitudes, the astronomy fraternity endure what the Russians call ‘White Nights’. Our seasons and corresponding hours of darkness are due to the 23½ degree tilt of the earth on its axis, which varies the position of our sun and puts it at its highest point in the sky during the summer. During these months the sun spends the greatest part of the day above the horizon, giving us, at least in theory, the greatest amount of solar radiation and thus warmth. The nights, however, are very short and are not dark as the sun is never far beneath the horizon. Meanwhile the southern hemisphere, being tilted away from Sun, is experiencing winter and therefore enjoying nights with the maximum number of hours of darkness. So I thought it might be interesting to talk about the skies ‘down -under’ and compare them with our northern skies.

On the south side of the equator the familiar constellations are upside down. In the northern hemisphere Orion stands upright, with Betelgeuse to the upper left and Rigel to the lower right. As an observer’s latitude decreases, the constellation reclines more and more, until eventually he is upside down with Rigel on the upper left and Betelgeuse on the lower right. Amongst all the other constellations Pegasus, the winged horse, is the one exception to this rule. He is actually upside down from our location, lying on his back with his neck and head pointing upwards. From the southern part of our planet, the flying horse is upright with its head and neck pointing at the horizon.

In the northern skies the position of the North Celestial Pole is easily indicated by a bright star, Polaris. Contrast this to the barren sky around the South Celestial Pole which lies in the dim constellation of Octans, the Sextant. A faint star called Sigma Octantis is the southern hemisphere’s equivalent to our North Pole Star but it is about one degree off the Celestial Pole.
Forming a nice equilateral triangle with the south celestial pole are two satellite galaxies of our Milky Way: the Large and Small Magellanic Clouds. They are visible to the naked eye on clear moonless nights as fuzzy patches. Named after the famous Portuguese navigator of the 16th century, Ferdinand Magellan, these must have been known for centuries, and were originally called Cape Clouds by sailors travelling round the Cape of Good Hope in South Africa. The Small Magellanic Cloud (SMC) is in the constellation of Tucana, named after the Toucan. The Large Magellanic Cloud (LMC) is in the constellation of Dorado, the Goldfish. This is not the goldfish we normally associate with household aquariums, but represents a large member of the Dolphin family seen in tropical seas and thought to be a good omen for journeying sailors. 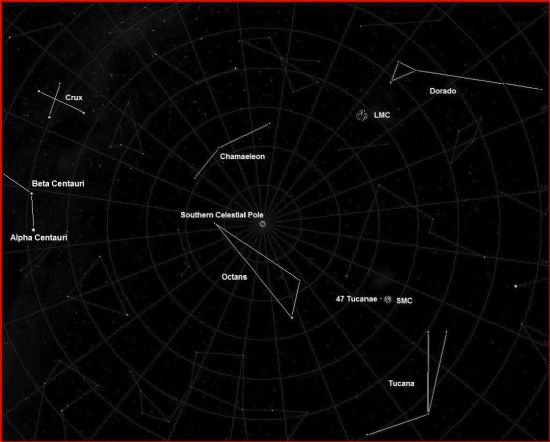 The SMC is much smaller than its companion LMC. Both lie approximately 190,000 - 200,000 light years away and they are about 80,000 light years apart. They are a delight to scan with binoculars - a bewildering maze of bright knots and patches. To the northwest of the SMC is the spectacular 47 Tucanae (NGC 104), the brightest globular cluster in the sky whereas the well-named spidery-looking Tarantula Nebula (NGC 2070) abuts the LMC. This was the location of the brightest and nearest supernova in modern times in 1987.

The vast majority of southern constellations (which we cannot see from the northern hemisphere) are rather dim and uninteresting. However, there are three that lie together in a line along the Milky Way which are bright and contain some of the most spectacular objects in the sky. Centaurus (the Centaur) is a vague camel shaped constellation with a large diamond shaped head enclosing the Southern Cross. Its two bright stars, alpha and beta Centauri, are both of first magnitude. Alpha Centauri is the third brightest star in the sky and an easy double. The system is actually a triple object with the fainter component, Proxima Centauri, difficult to see in small telescopes but at 4.22 light years from us is the closest star to our Sun. Alpha and Beta Centauri are equivalent to our northern pole-star pointers, for a line from alpha through beta leads to the most famous southern constellation: Crux, the Southern Cross.

Crux is not as obvious as expected being smaller and less bright than the ‘False‘ Cross made up of stars in Vela and Carina. Our equivalent cross in the northern hemisphere is Cygnus the swan, whose brightest star, Deneb, can be seen in our summer night skies as one of the three stars making up the summer triangle – the other two being Vega in Lyra and Altair in Aquilla.
The last of the ‘big three’ is Carina. This constellation is littered with visual feasts especially in binoculars. Eta Carinae itself is an example of a rare massive ‘luminous blue variable’ thought to be 100 times more massive and four million times brighter than our Sun. It fluctuates in brightness and, for a short time in the 19th century, became the second brightest star in the sky. Although currently just beneath naked eye visibility it is a prime candidate for a supernova explosion. It is associated with a giant cloud of gas and dust, the Keyhole Nebula, and is a region, rather like the Orion Nebula, of intense star formation.

If you get a chance to take a trip to the southern hemisphere take a look at the upside-down yet familiar constellations as well as those not seen before. From a dark site the Magellanic Clouds are particularly impressive. In the meantime back in the Highlands, we are entering the season for noctilucent clouds; pretty silvery white clouds that have formed high in the atmosphere. These can be seen in the north after sunset. Good luck and remember the longest day will soon be passed!