August is an exciting month for astronomers in the Northern Hemisphere. The nights are beginning to draw in, and by the end of the month the sky is dark enough to begin reacquainting yourself with the constellations after the long summer hiatus.

The constellations of the Summer Triangle are a good place to start, with the Triangle being marked out by Vega in Lyra, Deneb in Cygnus and Altair in Aquila. The area inside the triangle is full of interesting astronomical objects, including open clusters, planetary nebulae, beautiful double stars, supernova remnants, dark nebulae – you name it, there’s an example of it in the Summer Triangle.

But the Triangle is one of the more popularly travelled areas of the sky, and there are other less frequented constellations to be explored nearby. Ophiuchus is one such constellation, and it is situated below and to the right of Aquila. It is a large constellation, with a rather uninspiring shape, looking like a slightly stretched image of a house, with a short tail underneath it! In mythology, Ophiuchus represents a figure wrestling with, or holding, the nearby serpent represented by the constellation Serpens.

There are several possible identities for the snake-battling figure, with different myths having different main protagonists. One suggests that the figure is the healer, Asclepius, who discovered the secrets of resisting death by observing snakes caring for each other with healing herbs. To prevent him passing on his knowledge to the whole of humanity and making Man immortal, Zeus killed Asclepius with a lightning bolt, but then placed him in the heavens as a reward for his good works.

The constellation contains some interesting stars. RS Ophiuchi is a recurrent nova star. It consists of a Red Giant and a White Dwarf, orbiting each other at close proximity. Every twenty years or so, enough material has been leeched off the red giant and onto the surface of the white dwarf to power a thermonuclear explosion that results in a massive brightening of the object. The white dwarf’s orbit is actually within the giant’s distended atmosphere, which makes it possible for this phenomenon to occur. Between outbursts the star is usually fairly dim at between 10th and 14th magnitude, but when the nova occurs it can brighten to magnitude 5 for a short period of a few days.

Sadly, the last outburst took place in 2006, so we are probably not due another for quite a while, but it doesn’t hurt to keep an open mind and an open eye. 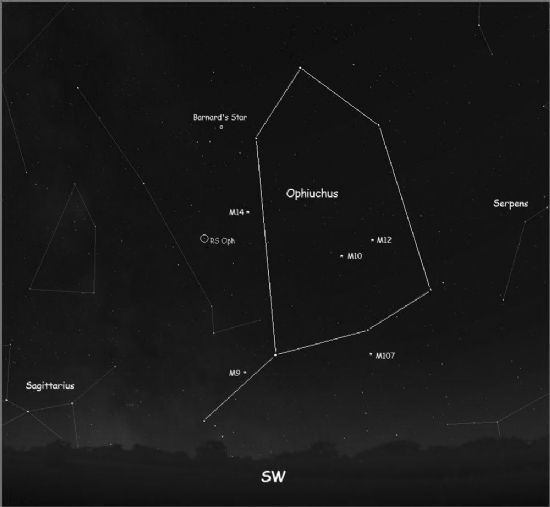 Another fascinating star in Ophiuchus is Barnard’s Star. This star is remarkable for several reasons. It is very close to us, at just under 6 light years. This makes it one of the nearest stars, and certainly the closest in the constellation. It is also very old. Estimates place it as being between 7 and 12 billion years. Now, considering that the universe is estimated to be approximately 14 billions years old, if Barnard’s Star’s actual age is near the upper limit of that estimate, it could well be one of the oldest stars in existence!

But the most unusual feature of Barnard’s Star is the relatively rapid motion it displays across the sky. Its rate of change in position against the celestial background (known as proper motion) is the largest known, at 10.3 arcseconds per year. To put that in practical terms, consider the following. One arcminute is equal to sixty arcseconds. The Full Moon measures half a degree, which is thirty arcminutues, or 1800 arcseconds. So in one hundred years, Barnard’s Star would shift its position against the background sky by the equivalent of 1030 arcseconds, or more than half a Moon’s diameter! That may not sound like much, but it’s a lot more than would be detected for any other star!

Speaking of detection, if you want to make a project of tracking Barnard’s Star, you will need a small telescope to do so, as it is not a particularly bright star. It shines at magnitude 9.54, putting it just within the reach of good binoculars. You would need to find the star and take a photograph of the area around it, or sketch the position of surrounding stars, then put that away for a decade or so. Repeat several times, say once a decade, and after most of your life you should be able to see the amount that Barnard’s Star has moved by comparing the records against each other. It’s good to have long-term projects.

Ophiuchus is also home to several Messier Objects, almost exclusively globular clusters. M9, M10, M12, M14, M19, M62 and M107 all reside within its borders. All these globular clusters are magnificent targets for telescopes of all sizes, as they all shine at between 7th and 9th magnitude. This even makes them detectable in binoculars, though the more aperture you use to observe globular clusters, the better they look.

Another bonus at this time of year, is that the constellation is relatively low down in the sky. Not always a good thing for deep sky observers, due to the less steady sky conditions close to the horizon, but fortunately this does not interfere as much with cluster observations as it does for fainter objects like galaxies and dim nebulae. The clarity of planets also suffers when they are low down though, as you may discover if you train your telescope on the bright ‘star’ that is nearly due south throughout the August nights. That ‘star’ is king of the planets, Jupiter. If you are lucky and sky conditions allow, you may be able to see the different coloured bands that run round the planets disc, but at a height of only 15 degrees or so above the horizon, high–power study of the gas giant will probably be limited.

This is a shame, as only recently the super-massive planet’s gravity sucked up a passing object – asteroid or small comet probably – causing it to impact on the planet’s atmosphere. The resulting dark blotch against Jupiter’s multicoloured disc has already been keenly observed by amateur astronomers all over the world, and the Hubble Space Telescope has even been trained on the area, resulting in superb images of the impact site. The dark blotch will eventually smear and become less defined, gradually disappearing into the background of Jupiter’s atmosphere. So although not ideally placed for such observation, you never know. Sometimes, even against the odds, you can get sky conditions that are good enough to yield really good observations. Yes, good enough to make a real impact…