September brings longer dark nights, and in preparation for them the astronomical fraternity are dusting off their telescopes and cleaning their eyepieces in anticipation of a productive new viewing season.

What better way to start than to explore the constellation of Bootes (pronounced “boh-OH-teez”), which lies between the obvious and well-known constellations of Ursa Major and the Hercules? This constellation is very ancient but, surprisingly, is associated with few legends. Apparently Bootes was a herdsman who invented the oxen-driven plough and was rewarded by the gods with a place in the heavens (surely a better reward than mere material goods?) It is a large kite-shaped constellation, with Arcturus being its principle star.

Arcturus is one of the brightest stars in the Northern Hemisphere, just beating Vega, with a magnitude of -0.04. Arcturus was one of the first stars to be named and interestingly it was the first star to be viewed telescopically in daylight, in 1635. ‘Arktos’ is Greek for bear (hence arctic refers to the land of the bear, usually meaning Polar Bear), and is so-called because it appears to follow the constellation of the Great Bear through the seasons. Situated just north of the celestial equator, it can be seen by all inhabited continents of the world. It is a lovely orange colour with luminosity 115 times greater than the Sun, and is 36 light years distant. Despite being more luminous, it is much cooler than the sun, for it is a giant star; its energy spread out over a larger area. Being twice as massive as the sun, it has used up its fuel faster and is now middle aged. It has already exhausted most of its outer envelope of hydrogen and is currently in the quiet helium burning stage, when the helium core produces carbon and oxygen.  Our sun will look like Arcturus in six to seven million years time. 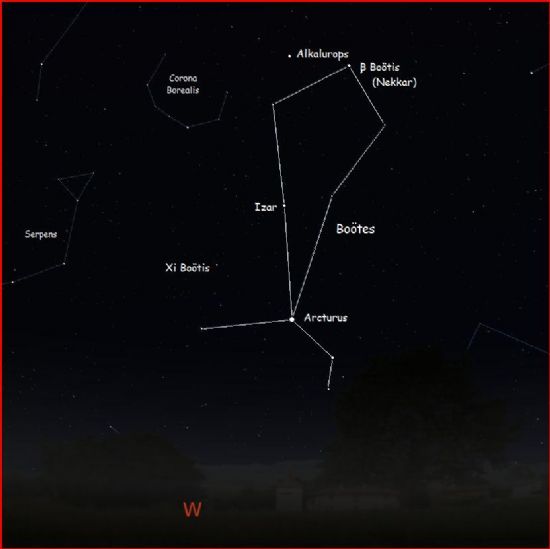 One of the most remarkable things about Arcturus is that it is just passing through our neighbourhood on its way to the other side of our spiral arm. Edmond Halley, of comet fame, discovered in 1718 that it displays a large proper motion (ie motion against the starry background.) It is approaching us at three miles per second, heading in the direction of Virgo, and in half a million years will be no longer visible to the naked eye. At present it is only bright because it is so close.

There are no obvious deep sky objects within Bootes, though there are a few interesting double stars. The best is Izar, or epsilon Bootis, one of the main marker stars of the constellation, and situated 10 degrees north-northeast of Arcturus. Izar is 250 light years away, and is a true double (or binary system) with an orbital period of at least 1000 years, and was discovered in 1829. The primary has a magnitude of 2.5 and is a lovely orange colour. The secondary is fifth magnitude and has been described as white, blue or greenish, giving a superb colour contrast. The pair can be seen in telescopes over 3 inches in aperture.

Alkalurops, or Mu Bootis, is a triple system consisting of a fifth magnitude main star, with a magnitude 6.5 companion nearby that can be detected with binoculars, or from a really dark site with really good eyesight, the naked eye! The binocular companion can then be split into two components using a larger telescope. The main star and one of the companions are white in colour, but the third component had been described as having a reddish tinge. Xi Bootis is another beautiful double star, with the components being magnitude 4.7 and 6.8, with a separation between the components of 6.6 seconds or so, Xi Bootis is fairly easy to split in small telescopes.

Bootes does have two more interesting bits of history. In April 1860, a very experienced observer noticed a 9.7 magnitude star, very close to Arcturus, which gradually over two weeks faded until it was no longer detectable telescopically. This ‘Vanishing star’ has never been seen again, but was given the designation T Bootis and may be a recurrent nova. It may be interesting to keep an eye on the area just in case it reappears.

Beta Bootis (known as Nekkar) is the nearest bright star to the Quadrantid radiant meteor shower of January. The constellation of Quandrants (the quadrant) was located between northern Bootes and the tail of the Ursa Major and was invented in the 18th century. The International Astronomical Union however deleted this constellation in the 20th century leaving the Quantrantids meteors the only evidence of its past location.

You will need to observe Bootes soon after nightfall, as the constellation is fairly low in the west by 10pm. (not ideal for observing in September! Ant) Several of the objects mentioned should stay above the horizon long after that though, and will make for a good way to start the new observing season.