The Queen of the Heavens

Which star pattern do people learn first? The Plough, with its two pointer stars showing the way to the Pole Star. This is the most famous, but perhaps the easiest is the M or W shape of Cassiopeia.

At this time of year Cassiopeia floats overhead on the other side of the Pole Star to the Plough. If the Plough is low, Cassiopeia is high and vice versa. In November/December Cassiopeia is an M in the north-western sky; in spring a W. The constellation is easy to pick out with its bright and distinctive pattern of stars with the arching band of the Milky Way behind it. In Greek mythology she was the Queen of Ethiopia who angered the Sea God Poseidon when she vainly stated she and her daughter Andromeda were more beautiful than his sea nymphs. The result is the well-known Andromeda-Perseus tale of romance and bravery. After Queen Cassiopeia and her weak husband King Cepheus died, Poseidon, still angry with the pair, placed them in the heavens in a circumpolar position so they would never be out of his sight. As an additional punishment the Queen was made to hang upside down for part of the year. Her husband being weak was given a fainter part of the sky to rest in.

Lying against the Milky Way, Cassiopeia is a delight to scan with binoculars for the area is awash with open clusters. In the classic three volumes of Burnham’s Celestial Handbook, 26 open clusters are listed in Cassiopeia, more than any other constellation. The two most famous are M 52 and M103. M52 can be a challenge to pick out as, although bright at magnitude 6.9, its light is spread out over a large area and it is 5000 light years away. Fortunately it is easy to locate as one simply draws a line from Alpha through Beta Cassiopeia and extends it onwards for the same distance again. It is a definite smudge in binoculars, whereas a 3-4 inch telescope reveals a few dozen mostly blue-white stars with a scattering of yellow ones. 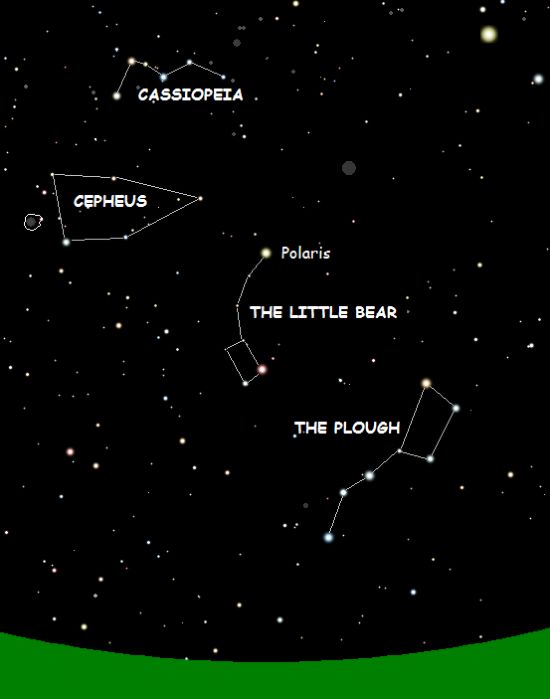 M103 is easier to find being in the same binocular field of view as Delta Cassiopeia. The main problem is trying to identify it from the other open clusters in the area. There are 5 in the region between Epsilon and Delta Cassiopeia: M103, Trumpler 1 (Tr 1), NGC 654, NGC 663 and NGC 659 all confined within a 3 degree radius! M103 is a tight knot of stars with an outer triangle of 3 brighter stars making it appear like a compact Xmas Tree. This is even further away than M52 at 8500 light years. The third brightest cluster in Cassiopeia is NGC 457 with a magnitude of 6.4. It is south west of Delta Cassiopeia and next to the obvious star, Phi Cassiopeia. In a low power view the cluster can be seen as a hazy spot just to the side of Phi. However, with more magnification it begins to resemble its ‘pet-name’ of ET, after the Steven Spielberg film of the same name. Phi and a 7th Magnitude star are the alien’s eyes, whereas the several strings of stars flowing from the area, suggest a body, arms and legs. 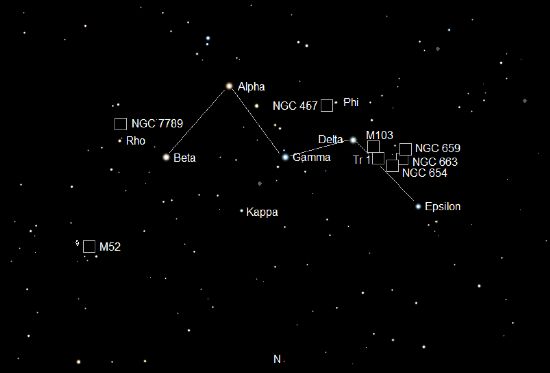 Cassiopeia was home to one of the most famous and important stellar events in history. On the 11th November 1572 Danish astronomer Tycho Brahe observed a new star near Kappa Cassiopeia. Visible to the naked eye for 16 months, it was even observable in broad daylight at its peak. It has since been identified as a rare Milky Way supernova. Only 3 other such events have been seen in the last 1000 years: 1006, 1054 and 1604.

Two other interesting naked eye variable stars are found in Cassiopeia. Gamma Cassiopeia is the brightest member of the ‘shell-type variables’, These are stars which, during an outburst, brighten as they throw off an outer layer of material and then fade back to normal when this material dissipates. In 1937, at magnitude 1.6 it was brighter than Polaris but fell to magnitude 4 during 1940. For the past few decades it has been steady at around magnitude 2. It is easy to compare its brightness to the neighbouring Beta Cassiopeia, which is a constant magnitude 2.3.  Rho Cassiopeia, near Beta, is a completely different type of star. Big, old and obviously red, it pulsates. Just visible to the naked eye from a dark site (at magnitude 5) it occasionally expands and falls below naked eye visibility. It is remote at 1500 light years distant and very luminous at 200,000 times that of our sun. In binoculars just above Rho is an added bonus of another open cluster, NGC 7789.

So get out there, Wrap up well against the winter chill, and arm yourself with some binoculars. Then, whilst lying on a deckchair, look upwards and go open cluster hunting in the ’Queen of the Sky’.