Last month we looked at the various different ways of observing the Sun’s photosphere in “white light” using safely filtered telescopes or specialist Herschel Wedges. This month, we’ll look at a different layer of the Sun’s composition: the chromosphere.

Have you heard of solar flares, coronal mass ejections, prominences, filaments, active regions and plages? Possibly only some of them? Well, they’re all features that can be detected by observing the chromosphere, using a special breed of telescope that filters everything from the Sun out, except for radiation with a wavelength of 656.28 nanometers. By observing only at that wavelength (or 6562.9 Angstroms, give or take an Angstrom) with these “hydrogen alpha” (or h-alpha) telescopes or filters, we can isolate and observe these dynamic and fascinating features. 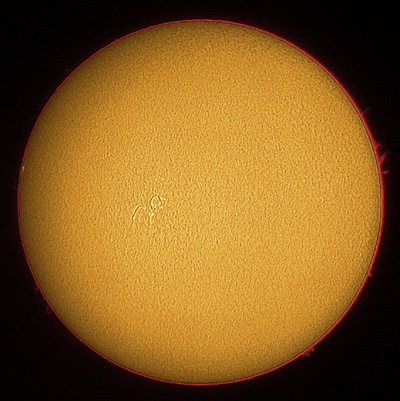 Prominences are outpourings of solar plasma, cast out into space along the Sun’s magnetic field lines. They arc outwards for up to several thousand kilometres before detaching and dissipating into space. Yes, several thousand kilometres – so individual prominences are quite often much larger than the Earth’s diameter and could easily swallow us up if we were to be unexpectedly and tragically teleported into the path of one. Filaments are the same as prominences, but seen against the Sun’s disc rather than against the limb. They can appear as snake-like meandering lines, scarring the Sun’s disc. As the Sun rotates, and if a filament is long-lived enough, it can become seen as a prominence as it approaches and passes the limb.

Did I say dynamic? Yes, every time you look at the Sun through an h-alpha telescope it appears different. The progress of prominences and filaments can be tracked over hours, and other features like active regions can also be seen to develop over short periods of time.

There are obviously links between photospheric and chromospheric features, as has been mentioned already. Imagine having two telescopes; one with a full aperture white light solar filter and the other being an h-alpha telescope. Now imagine observing the Sun over a period of an hour or so, with alternating views through the two telescopes. Imagine too, seeing a very small active region develop in the h-alpha views, with brighter and darker portions becoming increasingly apparent, and then noticing in the white light filtered views a small group of Sunspots beginning to appear. Well, no imagination is required. Several members of the Highlands Astronomical Society followed those very events one Saturday in October 2009, using members’ equipment on a cold but sunny afternoon!

An active region is an area where magnetic field lines punch through the photosphere into the chomosphere. On the photosphere it manifests itself as a group of Sunspots, with associated faculae. On the chromosphere (in the h-alpha view) it will show flares and plages too. A plage is an irregular brightened area seen in hydrogen-alpha wavelength, which shows vertically emerging, or possibly reconnecting, magnetic field lines.

It is only fairly recently that affordable h-alpha observation equipment has become available to amateur astronomers. Prior to that, observations were limited to white light and we were denied the pleasure of seeing active regions developing, prominences and flares shooting off into space, etc. Although, if you have ever been lucky enough to see a total solar eclipse you may have been treated to a brief sight of certain solar chromospheric features. With the Sun’s disc fully eclipsed, you may have seen prominences standing out from the limb with no need for filters or other optical devices. However, solar eclipses are not nearly as readily available as good hydrogen alpha telescopes and filters now!

It is also possible to observe the Sun in another selective wavelength of radiation, that of Calcium-K (Ca-K, 393.4 nanometres). The layer of the Sun revealed by telescopes equipped with filters for this is a cooler and lower layer than that revealed by h-alpha filtering. Even with the special filters or telescopes for viewing the Sun in Ca-K, the effect is very subtle. Many people cannot detect the details shown sufficiently well, so these instruments are primarily used as photographic tools. Interestingly, if you have had cataract surgery, you will probably be more able to make out the amazing details that Ca-K telescopes can reveal visually. These systems show areas of super-granulation, where intense electromagnetic field activity may be contributing to Sunspot activity or other features of interest.

The Sun is also now becoming increasingly active. It is emerging from a particularly low solar minimum, where solar activity in the form of Sunspots, prominences, flares etc was all vastly lower than usual. The solar cycle of 11 years means that activity is now increasing, and quite dramatically so. This is the best time ever for beginning to observe the Sun, using the best modern equipment available.

In that spirit, the Highlands Astronomical Society has invested in a complete hydrogen-alpha telescope system which we are very keen to put to use over the summer months. Summer is traditionally a time of reduced astronomical interest for us, as the light nights cut deeply into our celestial observing time. Possession of solar observing equipment makes summer a good deal more endurable, and we are keen to share the views of our dynamic Sun with anybody who is interested. We are hosting a series of Solar Sessions through the summer at our JSL observatory at Culloden Battlefield. These will be open to everyone, and will be announced on our website and in future Seeing Stars articles, so please keep your eyes peeled for announcements, and feel free to come along and see the Sun in a whole new light!