A Teapot Full of Stars

Sagittarius is a challenging constellation for us in the north of Scotland. It does, however, contain a huge number of beautiful and fascinating objects that are within reach of small to medium sized telescopes. Frustrating, isn’t it. A little forethought and careful planning (and some co-operation from the weather-gods) can yield good views of some of Sagittarius’s treasures though.

In mythology, Sagittarius is thought to represent a Centaur: a half-human half-horse creature, aiming a bow at the bright red star Antares in Scorpius. Details of the mythology tale are vague and contradictory, but some versions have it that the Centaur is Chiron, son of Saturn and Philyra, who turned himself into the half-horse creature to escape his jealous wife. What is a sure fact though, is that it is extremely hard to join up the stars in the constellation to make a picture of anything looking like a Centaur! You are much more likely to get a giant teapot or a house in Picasso’s cubist style. 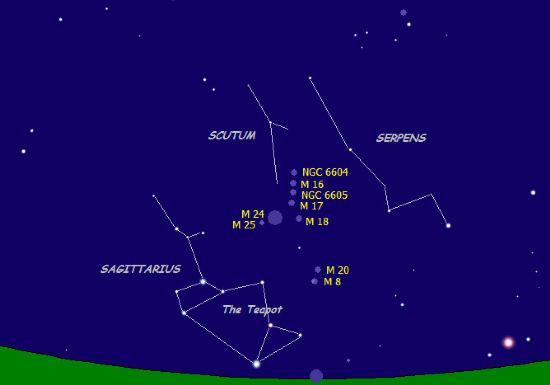 The constellation lies along a line of sight with the centre of the galaxy, with the plane of the Milky Way passing through it, making that part of the sky gloriously abundant in star clouds, open clusters, globular clusters and even galaxies as well as the odd planetary nebula. The clusters are the main attraction here, with some of the finest in the sky being on display.

Now when I say “on display”, they’re not exactly standing out with neon signs pointing at them. We have a problem in that when the constellation is at its maximum height above the horizon the sky doesn’t get dark enough to see many (if any) of its stars. August is a little bit better, even though Sagittarius is then beginning to slip even lower in the sky again. The constellation is never completely clear of the horizon, and we will only be able to see the upper portion of it, but we have to be realists and make the best of it.

Find yourself a good observing site with a clear, low southern horizon. A small to medium sized telescope, or even a pair of binoculars will show you many of the targets I’ll mention. You will need to spend some time patiently searching, using a good star chart, and be prepared for the fact that Sagittarius observation from 57’ N is all a matter of compromise. If you wait for it to get dark enough to show the objects at their very best, they will probably slip below the horizon. Try to use a good telescope/eyepiece combination with a wide field of view. If you can manage a 2-degree field with a magnification of 25x –30x or so, you will stand a good chance of being able to detect multiple clusters in one field of view.

Starting above the teapot lid and running down southwards in a roughly straight line from the constellation of Scutum, are a series of clusters and nebulae which are all worth having a go at. These include NGC6604 and beside it M16 (both actually just within the constellation of Serpens) – an area combining large bright open clusters, and also associated with the remarkable nebula known as the Eagle Nebula, so famously photographed by the Hubble Space Telescope in 1995. Those HST images showed the “Pillars of Creation” deep within the star-forming nebulous region.

Next down is NGC6605, another open cluster of magnitude 6, slightly sparse compared with its more impressive neighbours, you may just pass this one by as your eye is caught by the wonderful M17, or Omega Nebula. Also known as the Swan Nebula, which describes the shape of the main portion of nebulosity very accurately, this cluster and nebulous region is one of the most beautiful combined objects in the night sky. The Swan is an emission nebula, made of ionised hydrogen gas being excited by very young newly-formed stars deep within the cloud of matter. If you are able to employ an OIII filter at the eyepiece, you will notice enhanced contrast along the edge of the nebula, though the downside is an apparent dimming of the overall view.

Next down the chain is M18, another loosely-spread little open cluster of magnitude 6.9, containing only about a dozen stars. Between this cluster and the next highlight are some more open clusters, all fairly vague and sparse, until you get to…

M20, the Trifid Nebula! Although only listed as magnitude 9, this nebula will stand out in the eyepiece due to its size and shape. At just less than the diameter of the full Moon, you can afford to zoom into this nebula once you find it, and again employ any nebula filters that you own to bring out the various parts it contains. The Trifid is both an emission and reflection nebula: the emission part is lit up by radiation from newly-formed stars and the reflection nebula reflects the light from other stars towards us. The differences are seen most dramatically in photographs, where the emission nebula shows up as red and the reflection nebula as blue.

Down a small step from the Trifid is the Lagoon nebula, the amazing M8. This is one of the best star-formation areas in the sky for us, and is a memorable sight in any size telescope. The nebulosity represents highly ionised gas and the cluster shining forth from there contains between 50 and 100 bright young stars. The Lagoon is a stunning addition to any observer of deep sky objects of any type.

Now those objects are all strung out in a roughly vertical line dropping towards the horizon, and it can sometimes be hard to work out exactly which one you are looking at when the sky is not very dark and there aren’t many marker stars around for navigation. You may be thinking that I’m being slightly negative in my opinion of observing Sagittarius: that is not so, but I do want you to realise that our latitude does make it somewhat challenging to observe these beautiful clusters and nebulae.

There is another alternative. Take a trip down south for a while, planning it to coincide with a period that is free of the Moon’s presence of course, and take a ‘scope or two with you. Even a change of three or four degrees of latitude can make all the difference: the constellation will rise higher above the horizon and the sky will be darker as well. A trip away just to observe one constellation with a handful of clusters and nebulae – is it worth it? Been there, done that, definitely!