The Challenge of Finding Ophiuchus

When you look up into a dark sky, do you look up in wonder, amazed at the number and beauty of the stars or do you have a viewing plan? Amateur astronomers love the challenge of finding out what there is to see in the night sky and then going out to find it. If you are a beginner, identifying the Plough and Cassiopeia are rewards in themselves and both are easily seen, even on moonlit nights. Most of us have no difficulty identifying these two constellations. My challenge to you this month is to find Ophiuchus. This large, faint constellation is visible on a September evening in the south-western sky on a relatively Moon free night. September’s full Moon, the Corn Moon, is on Thursday 23rd, the date of the autumn equinox when day and night are of equal length everywhere in the world.

For those born between November 30th and December 17th Ophiuchus should be their birth sign for the Sun passes through this constellation on those dates. It is known as the 13th sign of the zodiac. Incidentally this is astrology, not astronomy, and astronomers are rarely astrologers.

Ophiuchus, the snake bearer, is represented as a man grasping the serpent that is the constellation Serpens. His body effectively cuts the serpent in half with Serpens Caput (head) and Serpens Cauda (tail).

According to ancient Greek star lore Ophiuchus (an Arabic word) is Asclepius or Aesculapius, a mythical Greek healer. He brewed a healing potion which gave humans immortality, the death of death. The ingredients of this potion were serpent’s venom mixed with Gorgon’s blood and an unknown herb. Asclepius was slain by Zeus, at the request of Hades who feared the competition, and was placed in the sky. Was this one of the first recorded attempts at population control? The staff of Asclepius has been the symbol of the World Health Organisation since its inception in 1945.

Once you have identified the constellation Ophiuchus, which looks like a Victorian bathing hut with a path leading down and out from its bottom left corner, pick up your binoculars. All binoculars are useful in astronomy, while those of 10x50 are optimal. These will magnify what your eyes see ten times. The front lenses are 50mm in diameter. The weight is reasonably comfortable, particularly if you rest them on a wall. Scan the constellation to find some misty patches. These are star clusters and should be easily found with your binoculars even in a light polluted sky. Open clusters are found in the disk of a galaxy and there are about 1200 of them in our Galaxy. They consist of relatively young stars and, as the name implies, are less closely bound together than globular clusters. 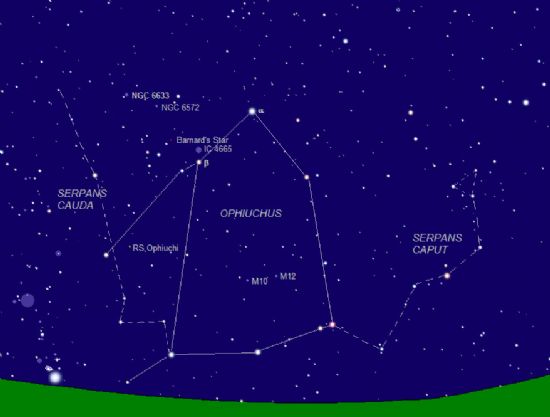 Two examples of open clusters in Ophiuchus are IC 4665, found to the right of 66 Ophiuci, and NGC 6633, seen further east and fainter. Globular clusters are fairly common; there are about 158 currently known in the Milky Way. They contain hundreds of thousands to millions of older stars and are found in the halo of our galaxy. There are numerous globulars to be found in Ophiuchus but M10 and M12 are the easiest ones to find and also to view, being in the same binocular field as each other. Both are about magnitude 7 but M10 is the brighter, being slightly closer, and when using a telescope of at least 4 inches aperture the individual stars are easier to resolve than those in M12.

One of the most well known stars in our Galaxy, Barnard’s Star, can be found in Ophiuchus. It is a red dwarf star which appears to move across the sky faster than any other star in our Galaxy covering a distance of the Moon’s diameter in 180 years. Ophiuchus is also home to Kepler’s star, the last supernova seen in the Milky Way when it exploded in October 1604. Also to a variable star, RS Ophiuchi which at magnitude 12 requires a large telescope to see it but which can become visible to the naked eye when it undergoes an outburst. The last time this happened was in 1985 so the next one could occur at any time.

By the end of the month Ophiuchus will disappear below the western horizon to reappear in the spring when it will rise in the east in the early morning.
Having met the challenge to identify that of Ophiuchus, follow this with by viewing the rest of the night sky. Jupiter (the Roman counterpart of Zeus) is at opposition, directly opposite the Sun, on the 21st. This means it is at its best for observation and binoculars will show Io, Europa, Ganymede and Callisto, the Galilean moons very clearly. Note that they are in a different position each night as they orbit the planet.

Early in the month Mars and Venus are close together low down in the west-southwest. They are in a straight line with the star Spica between them at 20.00 BST on the 2nd. With your binoculars you should be able to see Comet 103P/Hartley which brightens as the month goes on. It passes almost directly overhead and is visible all night long. If nighttime viewing is not to your taste then look for the bright planet Venus in the daytime. On 11th September the Moon and Venus will be close together in the daylight sky. If you can locate the Moon, Venus will be just above it and visible with binoculars. As always, make sure that you do not inadvertently look through these at the Sun. Even a brief exposure may cause permanent blindness which Aesclepius’s healing potion is no longer available to cure.