High up in the evening sky in the New Year is Perseus, the constellation associated with the son of the God Zeus and a mortal, Danae.  Perseus and his mother were cast out to sea, sealed in a box, by the King of Argos who had been told he would be killed by Perseus. Of course being an offspring of Zeus ensured his rescue by fisherman. Settled in a new country, his adoptive father sent Perseus on a very risky mission to obtain the head of the Gorgon Medusa. Anybody looking at this head would be turned to stone but being a demi-god help was at hand and using a shield and sword given to him by the Gods he was able to slay Medusa.

Perseus is easily identified. Its slightly awry Y shape is located by going up from the Pleiades (Seven Sisters) in a wide left curving arc towards the obvious W-shaped Cassiopeia. It is a constellation packed with interesting objects especially for the binocular user. 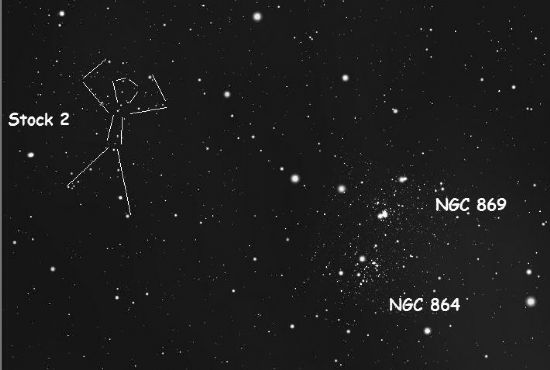 One of the most beautiful objects in the sky is the aptly named ‘Double Cluster’. This object can be seen with the naked eye from a dark sky site as two hazy patches between the top of Perseus and Cassiopeia. They were marked in ancient star maps as the handle of Perseus’s sword and his hand, and as Chi and h Persei. NGC 869 (h Per) and its companion NGC 884 (Chi Per) are open clusters containing hundreds of stars, NGC 884 having several red supergiants. It is a wonder to explore with binoculars, especially comparing the colours and shape of the two clusters. NGC 884 is the more compact and its red stars show it to be the older of the pair. They are thought to be about 8000 light years away and about 700 light years in diameter and are a unique combination in the night sky.

If you look at NGC 869 and follow a string of uniformly bright stars about 2 degrees eastwards, you will be looking at the vicinity of a rarely observed asterism, the Muscleman Cluster, or Stock 2. The asterism is about the same size as the double cluster combination, but a little more difficult to see. The shape is that of a stick-man looking as if he’s flexing his biceps over his shoulders. It’s a subtle effect but obvious once you’ve spotted it for the first time! A wide field of view and enough magnification to show the asterism’s stars are required, so a good object for a 3-4 inch refractor.

Another lovely area is in the vicinity of the brightest star in the constellation, Mirfak, named after the Arabic for ‘The Elbow’. This is a wide double and at the heart of a moving group of about 110 stars not surprisingly called the Alpha Persei Association. This contains predominantly young hot blue-white giant stars with some yellowish members, all moving at 16km/s in the general direction of Beta Tauri.

Marking appropriately the forehead or eyes of the Gorgon Medusa is the famous eclipsing variable star, Beta Persei, widely known as Algol: the Arabic name for the ‘Demons Head’ (ref. DC comics character and nemesis of the Batman, Ra’s Al Ghul). All cultures of the world seemed to have realised this is a strange object and associated it with evil, the Hebrews naming it ‘Satins head’, and the Chinese ‘Piled-up Corpses’. Around 1669 the Italian astronomer G Montanari noted it was variable. In 1782 the English astronomer John Goodricke realised it varied from 3.4 mag to 2.1 in a very regular fashion every 2 days, 20 hours, 48 minutes and 56 seconds! The dim periods lasted for 20 minutes. Goodricke surmised this was due to a fainter star passing in front of the brighter star causing the brighter star’s light to decrease. The two stars are separated by about 6.5 million miles and the eclipses can be easily studied with the naked eye over the course of a night, the times of minima being readily available in astronomy magazines and websites.

There are two Messier objects in Perseus. M34, an open cluster, can be seen easily in binoculars between Algol and Gamma Andromedae. It is a middle aged cluster about 1,500 light years away with an orange coloured star at its centre. Far more difficult and the faintest of all Messier objects is M76. Discovered by Mechain in 1780 it is now known as the ‘Little Dumbbell’ as it is far dimmer and less symmetrical than the brighter planetary nebula M27, the famous ‘Dumbbell’ in Vulpecula. It lies midway between Gamma Andromedae and Delta Cassiopeiae and It is 8200 light years away. Although small and dim it was discovered with smaller telescopes than most amateurs have available today.

So those are this month’s challenges - to observe the faintest Messier object and to watch the blink of the Demon’s Star.