Signposts in The Sky

With the exception of the Plough (which is an asterism), Orion is the most easily recognisable constellation in the sky during the winter months. It is the one that is regularly pointed out to beginners learning the night sky for the first time with its four bright, bold stars at the corners of the constellation and the band of three stars making up Orion’s belt. From the belt hangs his sword, where we find the Great Orion Nebula: a stellar nursery populated with baby stars and embryonic planetary systems.

There is a little bit more to Orion for those who want to find the complete constellation for he brandishes a club above his head and in his outstretched hand is a shield. 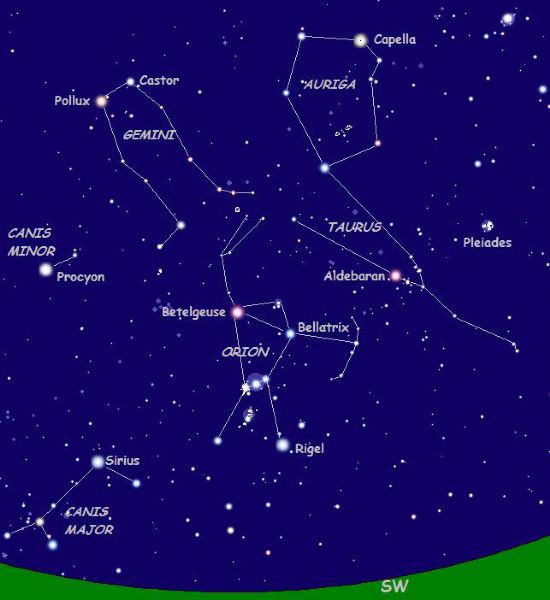 Orion is known to many cultures across the world although the myths surrounding this pattern of stars varies and sometimes refer only to the three belt stars. We see Orion as a hunter as told to us by the Greeks.

The distinct grouping of stars means Orion can be spotted straight away when looking south at this time of year. This is useful as we can then use Orion as a signpost to find other stars and constellations.

Draw a line through Orion’s belt and continue it downwards. The bright star you meet next is the brightest in the sky at magnitude – 1.46. This is Sirius, also known as the dog star for it is found in Canis Major, the large dog, which represents one of Orion’s hunting dogs.

In one of the myths about Orion, we find Apollo who was jealous of the love that Artemis (goddess of the hunt and animals) had for Orion. Apollo knew of Artemis’ skill with a bow and challenged her to hit a tiny object in the ocean. Unbeknownst to her, that tiny object was Orion taking a swim and she was deeply saddened to discover she had killed him. Sirius, his faithful hound, wouldn’t stop searching for him so Artemis placed both of them in the sky together.

Draw a line through Orion’s belt and continue it upwards and you’ll find an orange star, one whose outer layers have expanded and cooled as it nears the end of its life. This is Aldebaran and it marks the eye of Taurus the bull. A little further up you’ll spot a small grouping of stars riding high on the bull’s back, this is the Pleiades, a young open star cluster at just 150 million years old.

Betelgeuse, a red supergiant perhaps as large as the orbit of Jupiter, is poised to explode as a supernova at any time. At just 640 lightyears away, we should be treated to a spectacular display. Opposite Betelgeuse is Bellatrix, a blue giant star several times more massive than our Sun. It has developed a shell of gas that heralds the beginning of its transformation into an orange giant which will take place over the next few million years.

Now draw a line from Rigel, a blue supergiant in the lower right hand corner, diagonally upwards through Betelgeuse the red giant star in the top left hand corner. Continue for just over the same distance again and the bright star you come to is Pollux, in Gemini, one of the twins born to Leda after she was seduced by Zeus disguised as a swan. His twin brother, Castor, was the son of Leda’s husband, the King of Sparta. Legend has it they hatched together from an egg. Castor sits to the right of Pollux in the sky, each star marking the head of each twin. Castor is an interesting star for it consists of six stars orbiting one another whereas Pollux is a giant star, now orange-red in colour and nearing the end of its life.

It can be difficult to remember which star is Pollux and which is Castor. If you start with brilliant Sirius and move up to bright Procyon, then upwards again you’ll meet the twins. The first is Pollux remembered by realising the first letter is ‘P’ as it is for Procyon. Castor is next, the first letter being ‘C’. Continue moving to the right and the next dazzling star will be Capella, which also begins with ‘C’.

Another way to find Capella in Auriga, the Charioteer, is by drawing a line from the bottom left hand star (Saiph) through the first belt star (Alnilam) and upwards through the stars marking Orion’s head until you reach the sixth brightest star in the sky. Capella is actually a system of four stars in two binary pairs; two giant stars form one pair whilst two dwarf stars form the other pair.

This is a great time of year to go hunting for the hunter and to use him as a signpost to point your way towards some of the brighter stars in the sky and their constellations. It can also give you the opportunity to learn the names of some of those stars, something with which you can now impress your friends!