This week’s object is an open star cluster called the Pleiades, designated Messier 45 (M45). You may already be familiar with this object, and/or its other name; the “Seven Sisters”.

M45 is easy to find with the naked eye in the constellation of Taurus. Look to the South, and locate the constellation of Orion. Now we’ll hop up and to the right of Orion to a bright red star called Aldebaran; the ‘eye’ of Taurus the bull. From here, we hop a short way above and to the right to spot a bright patch in the sky about twice the diameter of a full moon (see image 1). Those with good skies and/or keen eyesight should be able to distinguish up to seven individual stars without optical aid.

Pointing your binoculars to the ‘patch’, you will see a stunning cluster of tens of stars, most with a vivid blue hue (see the binocular view in image 2). This blue colour is due to the Pleiades being a relatively young cluster, with lots of very hot stars. Estimates of the age of the cluster lie in the range of 75 to 150 million years, which may sound rather old, but is in fact very young for stars which may last for many billions of years!

The nine brightest stars in M45 have names of Greek origin - the ‘Seven Sisters’ of Sterope, Merope, Electra, Maia, Taygeta, Celaeno, and Alcyone, along with their mythological parents Atlas and Pleione. Image 3 shows a map of the Pleiades with the stars labelled (credit: Roberto Mura). As an aside, an alternative name for the Pleiades in Japanese culture is ‘Subaru’ - now you know where the stars on the Subaru car manufacturer’s logo come from!

Observing the cluster with your binoculars, see if you can spot the curving chain of 6 fainter stars starting just below Alcyone - this is a particularly nice feature for binocular observers. Under ideal observing conditions and with a dark sky, some ‘haziness’ may be observed in and around the cluster. This nebulosity is not directly related to the Pleiades (it is gas and dust in the nearby interstellar medium) but is nevertheless illuminated by their intense light. Again, ideal conditions are needed, but it is possible to pick up this nebulosity with a binocular, with the most prominent area being close to Merope.

Most of all though, enjoy observing this stunning cluster - it truly is one of the best binocular objects in the sky, and its undeniable beauty has captured the minds of many observers past and present.

“Many a night I saw the Pleiads, rising through the mellow shade,

Glitter like a swarm of fire-flies tangled in a silver braid."

images courtesy of Stellarium (www.stellarium.org) except where noted otherwise. 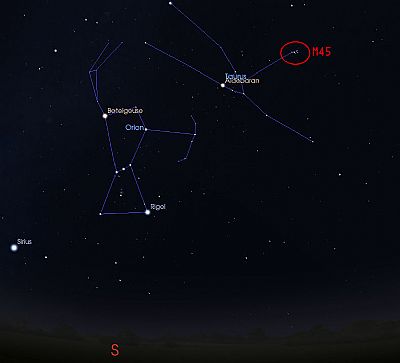 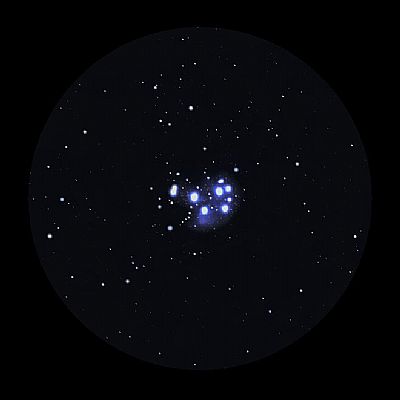 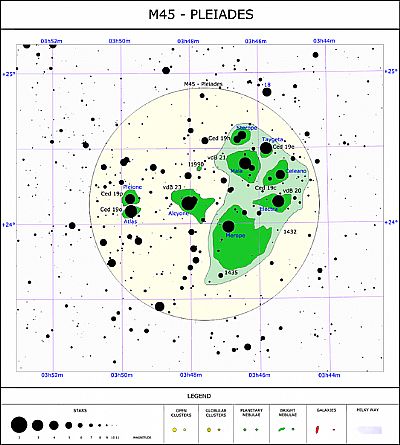