This week we’re returning to Taurus, to look into the ‘eye of the bull’. The large open cluster Melotte 25, better known as the Hyades, is our main target, and the ‘eye’ is the brightest member of the cluster (and indeed the brightest in Taurus), Aldebaran.

The Hyades is the 25th object in the Melotte (Mel) catalogue of open clusters, published in 1915 by the British astronomer (of Belgian descent) Philibert Jacques Melotte. Locating this cluster is straightforward as you can see in image 1 - we hop from Orion up into Taurus and simply locate the brightest star Aldebaran, which is readily visible to the naked eye even from light polluted sites, and should posess a distinct red hue. The Hyades cluster encompasses Aldebaran, and mostly extends to its right. Image 2 shows a typical binocular view of the cluster.

When observing the Hyades through a binocular, look out for the ‘triangle of pairs’ - this is the heart of the cluster, and consists of 3 pairs of stars forming an approximate equilateral triangle. The rightmost pair are particularly interesting due to their contrasting colours; the upper star (Hyadum III) has an orange hue, while the lower star (Hyadum IV) has a distinct blue hue. This colour contrast shows especially well in a binocular. The stars in question do not form a binary system (they are an optical, or ‘line of sight’ pair), but they are relatively close together with a separation of around 4 light years; about the same as the distance from our Sun to the next nearest star.

We can however observe a true double star (a binary system) if we move a short distance away from the Hyades to look at Tau Tauri.

Tau Tauri is known as the “Bayer” designation of the star, and consists of a Greek letter and the Latin genitive of the constellation name. In this case we have “Tau” (τ), the 19th letter of the Greek alphabet, and “Tauri”, from Taurus. With Bayer designations, the stars of a constellation are usually assigned Greek letters in decreasing order of brightness, so Tau Tauri is (approximately) the 19th brightest star in Taurus. The aforementioned star Aldebaran is the brightest star in Taurus, so is given the Bayer designation Alpha (α) Tauri.

With that out of the way, we’ll get straight to finding our double star. Start by again locating the bright star Aldebaran, and then move to the upper right until you reach the next bright star, Ain (Epsilon (ϵ) Tauri), which is the bull’s second eye. From here, pan up and to the left until you are centred on the distinct blue star of Tau Tauri. The star ‘hops’ are illustrated in image 3, and image 4 shows the binocular view of the star field you’ll see when centred on the double star Tau Tauri.

Stabilising the binocular will greatly improve your ability to split this double into its component stars, so try sitting or lying down and brace your arms against either the ground or the arms of a chair. Mounting your binocular on a tripod (if possible) will give the best view. With 4th magnitude Tau Tauri centred, the secondary star, of 7th magnitude, should be visible at the 5 o’clock position relative to the primary, and you should be able to cleanly split the two stars. This pair form a true binary star system, orbiting their common centre of mass, and lie around 400 light years from Earth.

With the Moon appearing in Taurus by around Wednesday/Thursday, these two objects are best observed early in the week. The Moon moves away from Taurus by the very end of the week, giving another opportunity to spot this week’s objects, but they may be harder to see then due to the bright glow from the Moon. 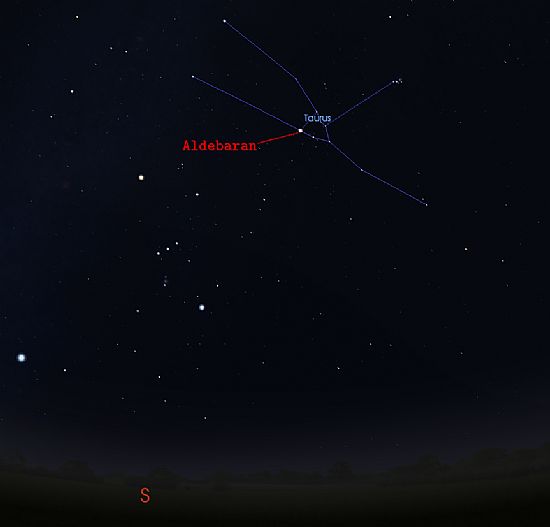 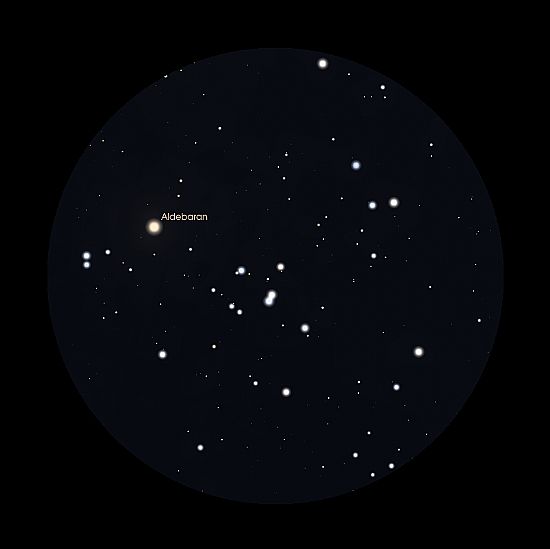 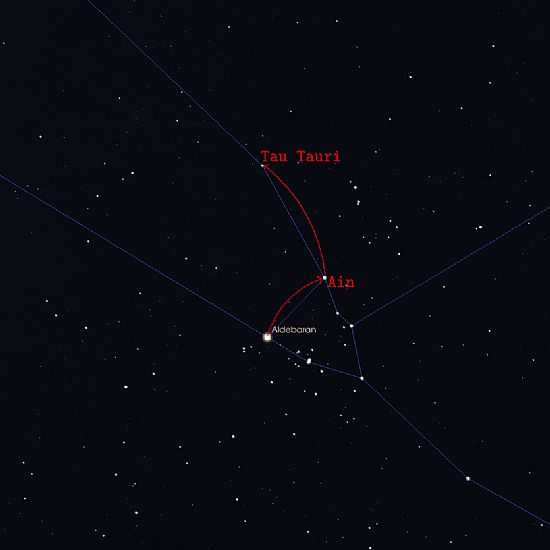 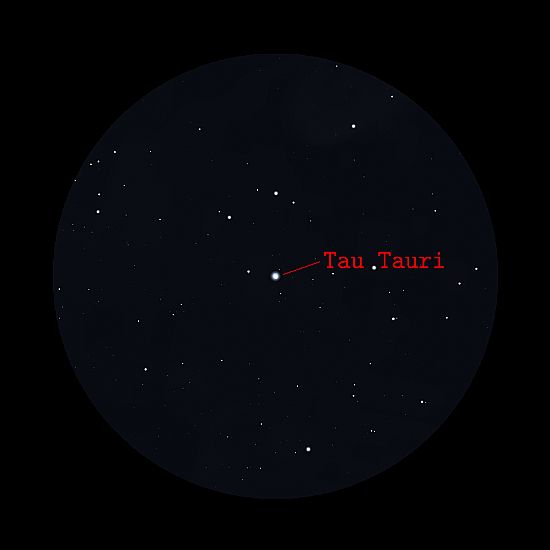