The August HAS meeting was surprisingly well attended, considering that so many people are on holiday this month. The promise of a fascinating talk being delivered by a professional astronomer from Edinburgh IFA may have had something to do with it, or maybe they all wanted to hear about the forthcoming plans being drawn up by the Society for events over the next few months? Perhaps it was the lure of the astronomical chit-chat that always pervades the tea break, augmented by the brews supplied by the ever attentive beverage-supply team. First on the list for the night were the notices, read out by Secretary Eric Walker:

Thanks were expressed to me (Antony McEwan) for my donation of a Meade Series 4000 14mm Ultra Wide Angle eyepiece for use in the JSL observatory telescopes. I came by the eyepiece by means of a business transaction with the well-known freelance astronomy writer Neil English, whose work is frequently seen in Astronomy Now magazine.

I recently sold him a telescope mount, and in the course of our extensive phone conversation he mentioned that he had one of these superb eyepieces sitting on a shelf not being used, and that he’d be happy to simply pass it on to me – free, gratis and for nothing! He felt that I’d put it to better (or at least more frequent) use! I gratefully accepted, and said that I’d go one step further than that, and pass it on to our Society observatory so that all the members could get to use it on their viewing nights – a condition he was very happy about!

So, thanks for the thanks, but they also go out to Neil as well!

It looks like this (it’s the one on the right): 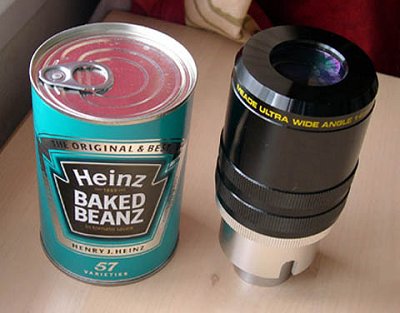 John Rosenfield then took the floor for a brief update on the findings of the Mars Express and Mars Reconnaissance Orbiter probes. The latest pictures from the MRO are the best yet and show incredible detail of Phobos and Stickney crater in particular. John recommended the BBC Science website to see these for yourself: http://news.bbc.co.uk/1/hi/sci/tech/7340670.stm

He went on to explain that it was planned to launch an unmanned sample return mission to Mars in 2018, when it is hoped that rock samples can be brought back to Earth and examined in minute detail. This page has more information on the proposed mission: http://news.bbc.co.uk/1/hi/sci/tech/7500371.stm

Some discussion then ensued about Mars’ tidally locked moons: Phobos and Deimos. The moons are very small and being tidally locked means they always present the same face to Mars as they orbit the red planet. It was noted that over time, any moon and planet will affect each other gravitationally, and the moon will always raise a tidal effect, however small, on the larger body and vice versa. It was suggested therefore that this will slow down the rotation of both bodies and the smaller one eventually becomes tidally locked.

Another favourite topic on those who like to discuss the Martian moons is how they came to be Martian moons in the first place. Were they asteroids captured into orbit by Mars’ gravity? Were they leftover fragments from the planetary disc that formed Mars itself, or are they the only surviving remnants of bodies that collided with Mars millennia ago? All those theories have their supporters.

Maarten de Vries gave a small report on an observing session he had shared with Simon Urry at Simon’s observatory (previously our own) on the Black Isle. This had taken place on the night prior to the meeting and Maarten said that the sky conditions had been absolutely brilliant, with many deep sky objects being visible and observable, despite the lack of true astronomical darkness (which comes in just a few days time now).

Maarten spoke again about the Messier Challenge sheets that he had prepared for Society members. He has divided the list of Messier objects into different categories based on their difficulty to find or observe. The sheets are named Bronze, Silver, Gold and Platinum, in rising order of difficulty.

It is suggested that interested members take these sheets and mark off the objects as they find and observe them. Upon completing a sheet, they can then return it to Maarten and be awarded a certificate for that category. The BA (British Association for the Advancement of Science) are supplying all the sheets so there are no printing fees involved, so the whole project is completely free and should be fun as well.

Maarten proposed that we may have a Breakout Group next month focusing on how to find these Messier objects using finderscopes, star charts, star-hopping, etc, so if you’re interested in this don’t miss the September meeting!

To help with this project, Maarten has sourced an excellent little book of star charts that he can supply for a discounted price of £8. The Phillips Guide to Stars and Planets is usually available for £9.99 so that’s a good saving and a great way to get into tracking down astronomical targets for your binoculars or telescope.

The Messier Challenge sheets are available now so contact Maarten if you would like to receive them. There may be plans to make them available on the website too, but at this stage Maarten thought it would be good if anyone starting the project could be named on a list for him to keep track of. He also mentioned that as far as completing the sheets and certification was concerned he was quite open to bribery.

Dr Ross McLure works as a researcher at the Institute for Astronomy at Edinburgh University.
He worked on his PhD on "Quasar host galaxies" at Edinburgh from 1996-1999. He received a PPARC Personal Fellowship at Oxford 1999-2002 and PPARC PDRA at Edinburgh 2002-2004.
From 2004-2007 he was a Royal Society Research Fellow at Edinburgh and then in 2007 he was awarded his Lectureship there too.

Redshift theory all began with Edwin Hubble, who in 1929 announced that almost all galaxies appeared to be moving away from us. Working with spectroscopy, Hubble found that the more distant a galaxy was, the further its spectrum was shifted towards the red end, or ‘redshifted’. His work yielded Hubble’s Law, which showed that a galaxy’s radial velocity is proportional to its distance from Earth, and so Hubble’s Constant was introduced to the world’s scientists.

His work lent much support to the Big Bang theory that the majority of astronomers support today, but Ross made the point that although the theory is popular and has much mathematical and practical support, it is still ‘only’ a theory!

One of the points of hunting down objects with the largest redshift values is to determine at what point in cosmological history the ‘epoch of reionization’ took place. Basically, this is the time when the neutral hydrogen universe began to collapse and form structures, which released energy and thus began to ionize Space.

All the objects that we can observe in the universe are remnants of that time, and the more distant and faint they are, the older they are, so the closer they are to that critical period of history. The next question is what kind of objects caused this reionization process?

Originally it was thought that the reionization must have been caused solely by quasars (QUASi stellAR radio sources) which are extremely energetic and distant galactic nuclei.

Quasars were first discovered in the 1950’s, when the first radio surveys of the sky were carried out. In the 1960’s the accuracy of these surveys was improved by having optical observations confirm radio observation findings. By combining optical images and radio observations of the same object, features that looked just like stars were discovered to have very strange emission spectra, and so were obviously different classes of object entirely. These ‘quasars’ had very large redshift values, so were extremely distant; and yet they were still detectable from Earth. They therefore had to be giving out enormous amounts of energy and were very luminous.

As technology improved, and the Sloan Digital Sky Survey came into being in the 21st century, hundreds of thousands of quasars were uncovered. However, it was proven that the number of quasars was insufficient for the entire universe to have been reionized just by them, so it was then proposed that early galaxies were the culprits. Certainly there are many more galaxies than quasars, and with more and more being discovered with increasingly high redshift values, it looked as though this was quite likely. In actual fact it was probably a joint effort, with both galaxies and quasars sharing the blame.

Discovering galaxies became a whole lot easier with the arrival of another Hubble: the Hubble Space Telescope. This orbiting telescope, high above the Earth’s turbulent atmosphere, was able to capture groundbreaking images of galaxy fields – the most distant ones seen at that time. The famous Ultra Deep Field image is an example of how this amazing piece of technology was able to simply ‘scoop up’ whole shoals of galaxies in the nets cast out by its imaging equipment.

So how far back can we go? The current record for the highest redshift discovered is held by a team that includes a former colleague of Ross’s. Chris Willott, of the University of Ottawa, is part of an international team that observed a quasar with the catchy title of CFHQS J2329-0301 and analysed its spectra to prove a redshift value of 6.43! This is the new frontier in redshift research, but it is hoped that it will not be too long before objects with redshift of 7 or higher will be being routinely revealed.

Technology is the key to this. Mention has already been made of the Hubble Space Telescope, and it is hoped that its successor, the James Webb Space Telescope (due to be launched in 2013) will continue to help in this important work. New ground-based telescopes will also contribute, including the Extremely Large Telescope, which is proposed for the European Southern Observatory in Chile. It will have a 42m-diameter mirror, consisting of several smaller ones fitted together. Adaptive optics will also be used to compensate for the negative atmospheric effects that plague ground-based telescopes. Amazingly, this behemoth of optical design may not be too long in the offing. It is hoped to be operational by 2017 – less than a decade away!

At about that time, we may be welcoming Ross or another redshift researching astronomer back, to talk about their latest discoveries of quasars and galaxies with redshift values of 7, 8, 9 or 100 using this optical marvel! But lets hope we don’t actually have to wait that long before we see Ross back at a HAS meeting sharing his fascinating findings!

The next meeting takes place on Tuesday 2nd September, and the speaker will be Colin Donaldson, currently attending Glasgow University. Colin is well known to us as a former member of HAS, so it will be great to hear his talk on ‘Physics of the Extraordinary’. Don’t miss it – start time is 7.30pm sharp.

Enjoy the encroaching darkness, and remember to drop by the message board on the website if you want to ask questions or simply pass on your observations. http://www.spacegazer.com/forum