Spinning around the pole star, flanked by her husband Cepheus and daughter Andromeda, sits Cassiopeia, Queen of ancient Ethiopia. Tied to her chair and placed in the sky by an angry sea god as punishment for her vanity and boasting, she must also suffer the indignity of hanging upside down during her travels.

Cassiopeia is instantly recognisable in the northern skies as a large lopsided W, or M, depending on which way round it is. It lies in a particularly dense and star rich part of the sky, the plane of the Milky Way, and has many objects of interest to both amateur and professional astronomers.

The familiar asterism, the W, is a ‘line of sight’ alignment only and is made up of 2nd and 3rd magnitude stars varying in distance from 19 to 442 light years. Alpha Cas, Schedar, is an optical double with a 9th magnitude blue partner to the main orange star. Beta Cas, Caph, is the nearest and brightest of the Delta Scuti class of pulsating variables.

Gamma, the central star in the W, is an odd beast. An unstable, rapidly rotating blue subgiant which throws off shells of material at irregular intervals, resulting in its dimming by a factor of nearly four. Eta Cas, Achird, is a very pretty binary in small scopes, with star colours of yellow and red. Eta is also a near neighbour at a distance of only 19 light years.

For the small scope or binoculars, Iota Cas is a nice double of yellow and blue stars but kick up the magnification and a third star, also blue, will be seen . Phi Cas is a 5th magnitude yellow supergiant, the most luminous known at about 200,000 times our Sun.

Cassiopeia contains only two of the objects from the Messier catalogue, both open clusters. M52 will show over 100 stars, while M103 will show a fan shaped fuzzy patch of about 40 stars. NGC 457 is another open cluster and one of the brightest with its stars seemingly arranged in chains. NGC 7789 contains over 1000 members and is a hazy patch in binoculars. A telescope is required to do it justice, as is the case with NGC 7635, the Bubble Nebula, a vast sphere of nebulosity. 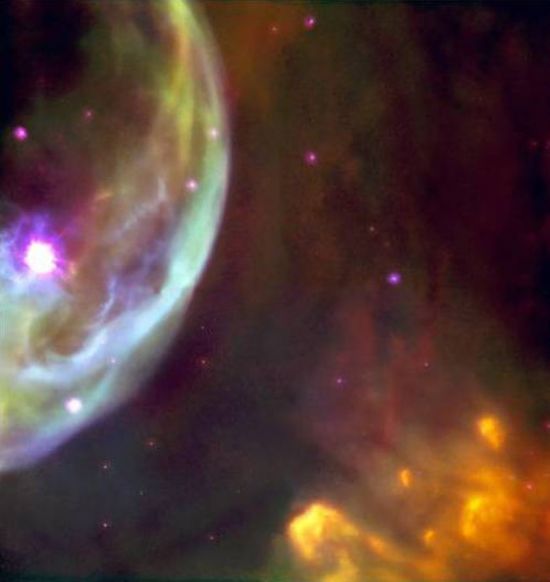 There is a high concentration of variable stars within this constellation, including most of the W stars. One in particular, R Cas, a very red giant, varies in brightness by a factor of 4,000 over a period of 431 days. It therefore ranges from naked eye visibility to needing a 10” telescope to spot it. S Cas is also a red giant with a huge variability and is one of the coolest stars known with a surface temperature of only 1900 degrees. By way of comparison, our Sun is 5,800 degrees at its surface.

In 1572 the brightest supernova of the last 500 years, and one of only four in our own galaxy, was seen in Cassiopeia by Danish astronomer Tycho Brahe. Despite his meticulous and detailed observations, no star has ever been found at the location, only faint shreds of nebulosity. Cassiopeia A, near M52, is thought to be the remains of another supernova which exploded around 1667 without being recorded by anyone. It is now the location of the brightest radio source in the heavens, other than our own Sun.

Late October brings another opportunity to see all of a total Lunar eclipse, weather permitting, on the morning of the 28th. The timescale when visible changes are most likely to occur are between 02:15 and 05:54, with the eclipse at maximum at 04:04.