…And The First Shall Be Last

Look to the south at about 2200, underneath the constellation of Andromeda and the square of Pegasus, and you will probably think there’s not much of interest there. Despite being devoid of bright naked eye stars, the constellations in this region contain some stunning and unusual objects for the amateur astronomer.

Triangulum is a small constellation and one of the original 48 drawn by Ptolemy in the 2nd century AD. It represents Sicily, whose inhabitants begged Jove (or Jupiter) to place their beautiful isle in the heavens. Unremarkable at first sight with only two stars brighter than 4th magnitude, it does contains the showpiece galaxy Messier 33.

M33, the Pinwheel Galaxy, is a face on spiral galaxy which covers an area of sky about 4 times the size of the full Moon. It has allegedly been glimpsed visually from a very dark site which would make it, at nearly 3 million light years away, the farthest object visible to the naked eye. Good binoculars and a dark sky should show quite a pleasing view but a telescope of at least 4” will be needed to start to resolve the spiral arms. Low eyepiece powers will also be needed due to its large size. Comparable in size to our own Milky Way, M33 is still actively producing new stars.

Pisces, the last sign of the Zodiac, sprawls dimly over a large area beneath the Great Square of Pegasus. The sign of the fish figures large in Christian and Pagan religions and represents the renewal of life each Spring.

Little of the constellation can be seen from town but, from a dark sky site, the circlet of stars at the western end is quite conspicuous. 19 Piscium, just east of the circlet, at magnitude 4.8 is one of a very few naked eye carbon stars and is a very red, low temperature giant in an advanced state of evolution.

Alpha Piscium, Alrescha, is a telescopic binary with a colour contrast described as ‘weird’ and which seems to vary, depending on the observer. Zeta, magnitude 5.2, is a colourful double lying right on the ecliptic.

M74, a face on spiral galaxy of magnitude 9.4, requires a dark sky and a telescope of 4” to 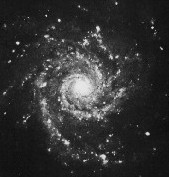 appreciate its structure, bright nucleus and to resolve the well defined arms. Larger telescopes will show increasing detail, nebulous regions and star forming areas within the arms. A difficult target but worth the effort.

For amateurs with telescopes of 8” and up, Van Maanen’s Star is the closest solo white dwarf to us at 14.4 light years. A dim magnitude 12.4, this 10 billion year old stellar corpse is slightly smaller than Earth and weighs as much as the Sun, about 20 tons per cubic inch. A star chart will be needed to find this oddity!

Beneath Triangulum lies Aries the Ram, associated with dawn, spring or the beginning of life. The first sign of the Zodiac, it represents the Golden Fleece sought by Jason and the Argonauts. The god Mercury sent a supernatural flying ram to rescue Phrixus and Helle, the mistreated children of King Thebes. They escaped by clinging to its fleece but Helle unfortunately fell into the sea and drowned. On his safe arrival in Colchis, Phrixus rather ungratefully sacrificed the ram in a sacred grove and hung up the fleece, which then turned to gold.

Beta Arietis (Sheratan), mag 2.65, is a spectroscopic binary whose components are practically touching at only 20 million miles separation, closer than the orbit of Mercury around the Sun. Gamma Arietis (Mesarthim) is one of the earliest double stars discovered and is comprised of two 4th magnitude white stars.

Aries’ main claim to fame is as the site of the Vernal (Spring) Equinox, defined as the point where the Sun passes from south to north of the celestial equator and is also the zero measurement point from which all astronomical objects are located in the sky.

The Vernal Equinox was located in Aries for over 2,000 years but, due to the Earth’s precession, it passed into Pisces around the year 7 BC. Pisces is now, by definition, the first sign and Aries the last – until we enter the age of Aquarius around 2600 AD. Co-incidentally, Jupiter and Saturn had a very close conjunction in 7 BC and would have appeared in the sky as a single, very bright, unblinking star. Hmm…