The Realm of Galaxies

Climbing up the sky, east of south at 2200, is demure Virgo, the Virgin, second largest constellation in the sky and the largest of the Zodiac. Tradition identifies Virgo as the personification of justice, or associates her with agriculture, hence her depiction holding an ear of wheat. This innocent recumbent maiden belies the stunning richness of astronomical treasures within her domain.

Alpha Virginis (Spica), is the 16th brightest star in the sky and an almost perfect example of a 1st magnitude star. About 2300 times as luminous as our Sun and 11 times as massive, it has a companion star half its size. Their centres are only 11 million miles apart and they orbit each other in just 4 days, compared to little Mercury at 36 million miles from our Sun with an orbit of 88 days.

Gamma Virginis (Porrima), 31 light years distant, is normally a very pretty visual binary, pale yellow through binoculars but, unfortunately, their separation is at minimum now and they will appear to us as a single star for a few years.

Between Epsilon Virginis (Vindemiatrix) and Beta Leonis (Denebola in Leo) lies one of the most remarkable areas of the heavens. Within this area of sky lies the Virgo Cluster – the realm of galaxies. This supercluster spans 12 degrees of sky between Virgo and the border of Coma Berenices above. Large observatories have identified over 3000 members in this celestial gathering of which 100+ are visible with an 8” telescope.

At 50 million light years with a diameter of 9 million light years, it is the nearest large cluster of galaxies to the Milky Way. About 75% of the galaxies are spirals and the remainder mainly ellipticals, plus some irregulars and dwarf galaxies. The four brightest members are all in Virgo and are Messier objects - M49, M60, M86 and M87 – all of which are ellipticals. This quartet ranges from magnitude 8.4 to 8.9 and are a challenge to spot with binoculars. A very dark sky is required.

M87 is one of the most massive and luminous galaxies known and contains more than 2 billion stars, and unusual in that it has a halo of thousands of globular clusters compared to the Milky Way’s meagre 200. It is also a source of intense X-ray emission and has a prominent jet over 4000 light years long. 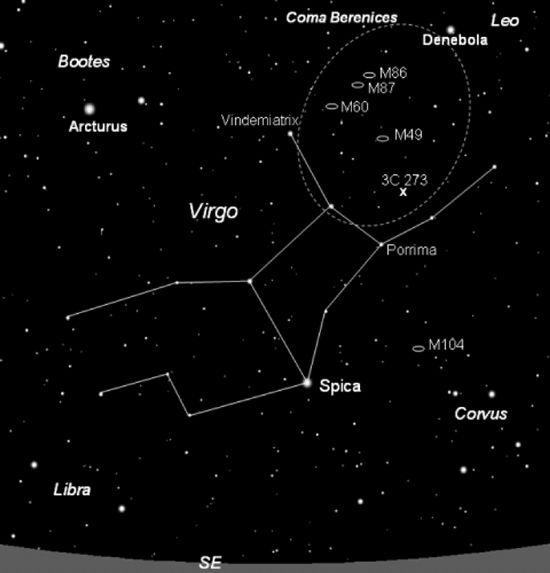 Virgo also houses the Sombrero galaxy, M104, notable for a prominent dark lane running through its centre. An almost perfect example of an edge-on spiral, it is even more massive than M87. It was one of the first galaxies to have its redshift measured by V.M. Slipher in Flagstaff, a discovery which subsequently led to the discovery of the expansion of the universe by Edwin Hubble.

How far can you see with your telescope? Astronomers are sometimes asked this question,

and Virgo has an exotic object over 2.6 billion light years away, or 20% of the age of the Universe. At magnitude 12.9 it is visible in a medium sized telescope. The object is called a quasar – 3C 273, and was the first of its kind to be found.

In the 1960s, radio telescopes pointed at the sky found concentrated sources of radio waves, some of which were normal objects. Most, however, were emanating from a very bright point, just like a star, and these were named quasi-stellar radio sources, later truncated to quasar. Observations revealed that these objects lie at tremendous distances and are most likely to be supermassive black holes at the centres of galaxies. All galaxies form from coalescing clouds of dust and gas and likely have a black hole at their centre. In the early days of a galaxy’s life (astronomically speaking), the black hole feeds voraciously on infalling material and this material emits radio waves as it is torn apart by the extreme forces. Quasars are also incredibly optically bright and obscure their host galaxies. They could outshine our Sun by a factor of 2 trillion.

As distance equates to time, quasars are some of the farthest, hence oldest, objects known, some at distances exceeding 13 billion light years, or 95% of the age of the Universe.

Jupiter is currently in Virgo and easy to spot, due to its brightness. Mercury also makes its best appearance of the year for several days around the 12th March. Look to the west, just after sunset, for the bright speedy planet. It should be easy to spot as there are no bright stars in its vicinity.