As observing is limited by light nights during Summer months, now is a good opportunity to check out our nearest neighbour, the Moon. Now believed to have been formed from material ejected from the Earth after a collision with a Mars sized object 4.5 billion years ago, it’s a genuine ‘chip off the old block’.

You don’t need fancy equipment to observe the Moon, diameter 3,475km; start with just your eyes and then progress to binoculars and telescope. As the Moon waxes, starting with a thin crescent on the 9th and growing to full on the 23rd, many features are easily visible to the naked eye. It’s also visible during the day!

When the Moon is a slim crescent, look for the phenomenon of Earthshine, caused by the Sun’s twice reflected light faintly illuminating the dark part of the Moon. It is also known as ‘The old Moon in the new Moon’s arms’. Although the Moon appears bright, it actually only reflects 7.3% of the Sun’s light, which is then bounced off Earth to illuminate the dark area. As the Moon grows the phenomenon gets overpowered by the brightly lit portion. 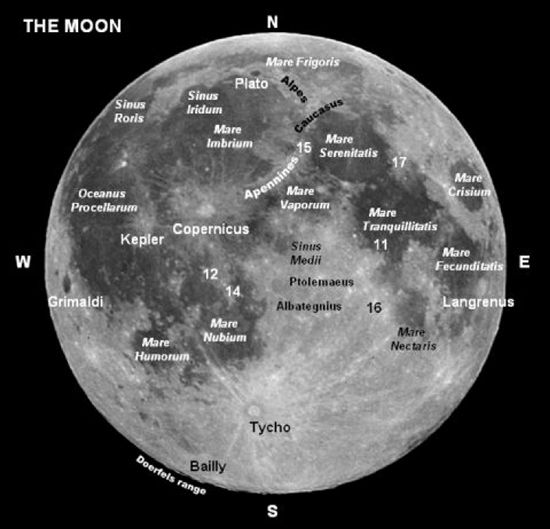 Visually, the Moon shows light and dark areas. The light areas are the cratered highlands and the dark areas are the relatively smooth maria, Latin for seas. Originally thought to be large bodies of water, they are large flat plains of solidified lava up to 3.9 billion years old. Mare Crisium and Mare Fecunditatis are first to appear as the Moon ‘grows’, followed by Mare Tranquillitatis, landing site of Apollo 11 in 1969, and Mare Serenitatis. For interest, Apollo landing sites are marked by their mission numbers, 11 to 17, with the obvious exception of the infamous Apollo 13. You won’t see them, even with the Hubble space telescope! Apart from the 12 Apollo astronauts, only one other human has reached the Moon. In 1999 the NASA spacecraft, Lunar Prospector, was crashed onto the surface of the Moon. It carried one ounce of the cremated remains of Eugene Shoemaker, remembered mainly for his discovery of the comet which impacted Jupiter in 1994.

Reaching first quarter, Mare Vaporum and Mare Imbrium, the largest at 1300km, come into view. The sharp eyed can spot the distinctive 101km wide, 2400m deep walled crater Plato on the northern edge of Imbrium and the large crater Ptolemaeus in the centre of the disc. From first quarter to full, rayed craters come into view; Copernicus, spectacular Tycho and its 1000km rays, and Kepler. Their comparative brightness against the much older surface terrain is due to fairly recent impacts excavating vast quantities of deeper material. Mare Nubium, Mare Humorum and Oceanus Procellarum, the Ocean of Storms, fill out the Moon’s ‘face’. Another large walled crater, the 255km wide and 3200m deep Grimaldi is visible near the western limb.

Step up to binoculars, 7 or 10x50 are ideal, and the views become a lot more interesting. If you don’t have a tripod, lean your elbows on a car roof, or use the garden wall to aid image stability and stop your arms from becoming tired. The best viewing of lunar features is on the line of the terminator (the dividing line between the dark and sunlit portions) as this will cast shadows, giving greater depth perception and revealing many smaller features. Spend some time scanning this area – patience is rewarded. The full Moon is extremely bright, bland and fairly shadowless, resulting in small details being lost in the glare. If you progress to a telescope for viewing, consider the purchase of a neutral density filter or, even better, a polarising filter to reduce the glare. It’s not dangerous to the eyesight but will make you blink with its brightness!

With binoculars, you will see that the plains of the maria are surrounded by mountain ranges. One of the largest ranges is the Apennines, with peaks of up to 4400m, running along the south east of the Mare Imbrium to just beyond the Apollo 15 landing site. Skip over the gap and continue along the 5300m high Caucasus range on the north west rim of Serenitatis, with Montes Alpes to the left, on the north east rim of Mare Imbrium. Continue westward to reach the Jura Mountains bordering Sinus Iridum. The Lunar Pyrenees can be found on the western rim of mare Fecunditatis.

Look for ‘islands’ apparently floating off the limbs of the Moon, especially the south west quadrant. These are caused by sunlight catching high peaks but not illuminating their base. The Doerfels range, reaching an altitude of 8000m – nearly as high as Everest, is right on this limb, just below the 320km wide, 4,300m deep crater Bailly, the largest visible on our side of the Moon. Carrying on up the limb of this quadrant is the equally high Cordillera range. Watch the mountain’s characteristics change dramatically, depending on the angle of illumination of the Sun.

See if you can spot central peaks in craters like Langrenus, Albategnius and Tycho, formed from the upsurging of molten rock after impacts. Follow the rays of Tycho and watch the terrain change from the old heavily cratered highlands to the comparative smoothness of the Mare Nubium.

Even a small telescope will provide rewarding and detailed views of the Moon. All the above plus many smaller features come into view. Rilles, filamentary faults and channels can be spotted; a 4” telescope will reveal a system of them in Mare Vaporum and Sinus Medii. Aeons ago, some of these were meandering rivers of lava. Spend time observing along the terminator and watch how features change as the angle of illumination varies.

Two of the best known features are the Hadley Rille and Rupes Recta, the Straight Wall. Hadley Rille is a collapsed lava tube 125km long, 400m deep and up to 1.5km wide. This was where Apollo 15 landed and explored the terrain with the Lunar Buggy, which is still up there and which set the lunar speed record of 17km/h. The photograph shows the extent of the rille, with the Apollo landing site marked with a cross. Rupes Recta, in a crater called Birt on the eastern edge of Mare Nubium, is actually a steep slope and shows up best around first and last quarter when sunlight is at a favourable angle.

The Moon is tidally locked to the Earth and its rotation period (day) matches its orbit, meaning that it always presents the same side to us, well almost. The face the Moon presents to us is not the simple half you would expect, thanks to a phenomenon called libration. In essence, this is the Moon ‘rocking and rolling’ in its orbit, due to a complex mix of factors. These include: varying gravitational effects caused by the Earth and the Sun; the Moon’s slightly elliptical orbit and its axial inclination. Due to this libration, we can actually see a total of 59% of the Moon’s surface, so watch the outer edges of the limb and, from time to time, you will see rare features appear. The USGS image on the side bar shows all of the 59% of the Moon we can see from Earth – but obviously not all at the same time! To see an animation of libration in action, try here: www.wwu.edu/depts/skywise/lunar_libration.html, or here: www.rucus.ru.ac.za/~wolfman/Graphics/lunation.gif The latter may be a bit slower to load but also shows the change in the Moon’s size due to its varying distance from Earth a bit more clearly.

If you think you can occasionally perceive a difference in the size of the Moon, you could be correct. I’m not talking about the effect you get when the Moon is close to the horizon and appears huge – that’s just an optical effect and is due to the proximity of the Moon to familiar objects, like houses and hills. The Moon is usually viewed in isolation in the sky with no familiar objects near it, resulting in no sense of scale. The visual size of the Moon does change by about 12%, depending on distance from Earth, which varies between 356,375km to 406,720km. The image on the sidebar shows the difference between perigee (nearest) and apogee (farthest).

Due to its nearness and brightness, the Moon is one of the easiest celestial objects to photograph, as exposure times are short. The Moon can also be more than adequately visible through thin cloud, which we tend to see now and then. All that is required is to hold the camera up to the eyepiece and take a picture. (Make sure you switch the flash off, it won’t be big enough to reach….) Digital cameras are best as you can check the photo immediately and retake if necessary. Focus the Moon in the eyepiece as sharply as possible and keep the camera as still as possible. Experiment, it’s good fun and quite rewarding when you get the hang of it. Check out the image gallery where you will find several examples taken by HAS members.

An excellent and comprehensive source of lunar information can be found here. Charles A. Wood's excellent observing list, the Lunar 100, can be accessed from this page. This list is progressive from No. 1 to the most difficult at No. 100. Direct link here:

You don’t need a map to enjoy the Moon, but they’re inexpensive, available from bookshops, will help identify many hundreds of features on our sibling world and will add to the enjoyment of investigating our nearest neighbour in the Solar System.