The USA likes to celebrate July 4th, Independence Day in style, with fireworks displays, and NASA have decided to follow suit in space with a showpiece mission with the Hollywood title of Deep Impact.

Launched in January of this year, Deep Impact has been chasing down Comet Tempel 1 for a very short, potentially explosive meeting on 4th July. 24 hours before rendezvous the spacecraft will release a 370kg washing machine sized ‘bullet’ made of pure copper, which will guide itself to impact with the comet at a closing speed of about 37,000kph. The resulting cloud of dust and debris should allow the mothership’s instruments to analyse the chemical composition of the comet for 14 minutes after impact, whilst the onboard cameras will hopefully reveal close-up surface details.

Comets are still mysterious objects and are thought to be composed of rock and ice, remnants from the creation of the solar system 4,600M years ago, and the information from this mission will enable gaps to be filled in our knowledge about planetary formation.

Due to the uncertainty about the surface composition of Tempel 1, no-one knows for sure exactly what will happen but NASA predictions are that the impact may leave a crater of up to 100 metres wide, accompanied by a huge cloud of ejected material. This could result in the comet’s brightness increasing quite considerably, making it visible in good binoculars. From our location in the North, it will be a very challenging target as it will be low in the sky and still in twilight.

Impact will occur at about 0700 on the 4th but is not potentially visible to us until after 22:00 at night. Thanks to two bright ‘markers’, Jupiter and Spica, the comet’s position is fairly easy to find in the south western sky. Jupiter is very bright and Spica is about a fist and a half’s width to the left of it. The comet is about one fifth of that distance to the upper left of Spica and is flanked by two 5th magnitude stars. The diagram should help narrow it down. Fingers crossed! 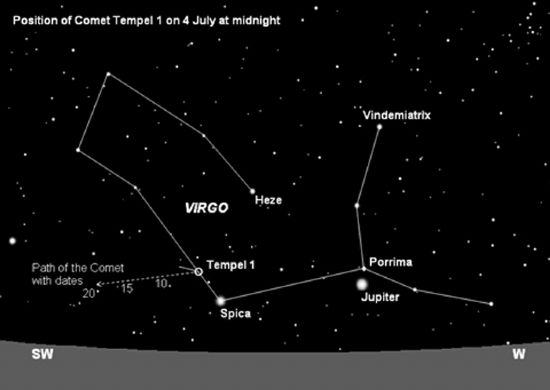 July also sees the long awaited return to flight of the Space Shuttle, following a two and a half year gap caused by the destruction of Columbia and the loss of seven astronauts during re-entry in February 2003. Discovery is currently sitting on the pad awaiting launch, actually for the second time after concerns about ice build up resulted in its removal from the pad last month to have the main boosters replaced.

The launch window is from the 13th until the 31st , in daylight only, and the first mission is to repair stabilisation systems on the International Space Station and to test potential on-orbit repair methods to the Shuttle’s tiles, wing edges and nose.

Safety concerns have resulted in severe limitations being placed on Shuttle operations and current plans are that they will only now be used to complete the construction of the International Space Station and will then be retired from service in 2012. Unfortunately for astronomers this means no third servicing mission will take place to the Hubble telescope, which will probably result in its early demise due to battery or gyro failure within the next few years, unless there is a change of heart at NASA.

Meanwhile on Mars, the two rovers Spirit and Opportunity continue to make new discoveries about our sister world’s past and to send back high resolution photographs of the Martian surface. Touching down in January 2004, these rovers had a design life of just three months and have now exceeded that by a factor of six. Their most memorable discovery to date has been incontrovertible proof that water once existed on Mars. The European Space Agency’s orbiter, Mars Express, may yet discover that the water is still there in the form of buried ice.

Our other near neighbours, Mercury and Venus, will also be receiving visits from spacecraft. The NASA Messenger was launched last year and will be the first craft to orbit Mercury but won’t arrive until 2011. Venus Express, based on the successful ESA Mars Express, will launch in October of this year to investigate our enigmatic, cloud covered neighbour in early 2006.

Currently undergoing pre-launch tests in the USA is the New Horizons mission to Pluto and the Kuiper belt. This mission is due to launch in January, 2006 and is due to arrive at Pluto no earlier than 2011. The mission is still awaiting final approval from the American government because of its nuclear fuelled power source. The same power source is still in use by the two most successful spacecraft ever, Voyagers 1 and 2, now at the outer boundaries of the Solar system 28 years after departing planet Earth. They are still actively sending back useful scientific data from the far reaches but are in danger of being switched off to save a paltry $1m per annum out of a total NASA budget of some $17 billion. Go figure….