As the summer nights draw on, look high up in the South and you should see a very bright blue-white star almost directly overhead. This star is Vega, which shines at magnitude zero and is the fifth brightest in the sky, being the principle star of the constellation Lyra.

The ancient Greeks named the constellation after the legendary lyre or harp constructed by Hermes and passed on to Apollo, which ended up in the possession of Apollo’s son-in-law, Orpheus. When Orpheus was a crew-member on Jason’s ship, Argo, he used the Lyre to counteract the enchanted music of the Sirens, saving the crew. When Orpheus died, Zeus placed his lyre in the heavens to immortalise his music. 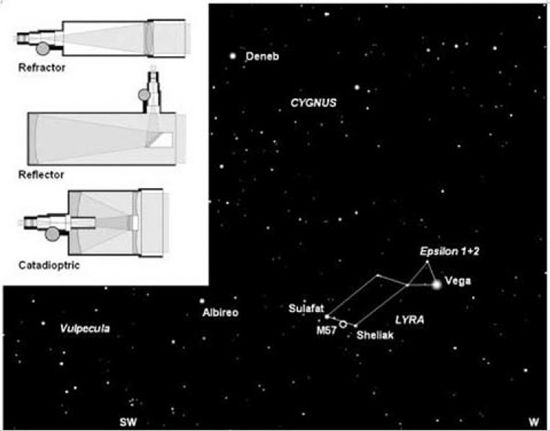 The constellation is unusual, in that the outline of its stars actually does resemble the shape of a lyre! Vega shines at the head of the instrument, and four lesser stars mark the points of its parallelogram-shaped body. Vega is used as the calibration star for measuring the magnitudes of other stars, and will replace Polaris as our Pole Star in about 14,000 years time. This is due to a slow wobble in the Earth’s rotation that causes the pole to trace a circle across the sky every 26,000 years. In 1850 Vega became the first star to be captured on a telescopic photograph, when William C. Bond and J. A. Whipple took its picture using the 15-inch Great Refractor at Harvard College Observatory.

Vega is only one highlight in Lyra; the constellation is also home to several double and variable stars and one of the most famous planetary nebulae. Just northeast of Vega is a pair of obvious stars that appear close together but can be separated by sharp unaided eyes. Known as Epsilon Lyrae 1 and Epsilon Lyrae 2, each of these stars has a companion only visible through a telescope, which will show them as two pairs of stars within the same field of view. This pair of pairs is therefore known as the Double Double. A good example of a variable star is Sheliak, the south-western corner star of the constellation, which takes 12.9 days to vary between magnitudes 3.34 and 4.34. It is easy to see the difference in brightness by comparing the star’s magnitude over several nights with the south-eastern corner star, Gamma Lyrae or Sulafat, which shines at a constant magnitude 3.24.

A beautiful planetary nebula, M57 or the Ring Nebula, resides almost halfway from Sheliak to Sulafat. Telescopically it appears as its name suggests, like an ethereal smoke-ring in the sky. Large telescopes can reveal the central 14th magnitude star and variations in the layers of glowing gas. It is a stunning sight in any size telescope.

Telescopes are required to view many of the sky’s showcase objects, but which of the three main commercially available types should you choose- reflector, refractor or catadioptric? Reflectors are based on the design used by Sir Isaac Newton, so are sometimes known as Newtonian reflectors. They use a concave mirror at one end, which reflects the incoming light back along the inside of the tube to a secondary mirror angled to reflect the light again, this time out the side of the tube into the focuser and eyepiece. Reflectors are cheap to produce, so larger ones can be bought cheaply to gather more light and therefore show more detail in the final image, though these can be bulky.

Refractors use a lens (or more commonly a pair of lenses) at the front of the tube to bring the incoming light to focus at the rear, where the eyepiece is placed. Good quality lenses are expensive to produce, so refractors tend to be smaller instruments, typically three to five inches in aperture, and remain relatively portable even when attached to a sturdy mount. Refractors can give very sharp high contrast images and are often favoured by planetary observers for this reason. The refractor is probably what most people would think of when asked to describe a telescope.

Telescopes that use a combination of mirrors and lenses are known as Catadioptrics and include types such as Schmidt-Cassegrains and Maksutov-Cassegrains, named after their inventors. They have a short closed tube with a mirror at the back that reflects light back to a secondary meniscus mirror sited in the centre of the telescope’s front lens (known as the corrector plate). This reflects the light again, through a hole in the centre of the main mirror to the focuser. This ‘bouncing’ of light means it travels a long way before reaching focus, so the telescope has a long ‘focal length’. This design can make it possible to combine large aperture and high-power views in a compact portable package.

Power is not everything though. Pushing the magnification up to the numbers claimed by the manufacturers of the cheap telescopes in catalogues and non-specialist shops merely dims the image and makes it harder to focus. Many reliable telescope retailers advertise in the pages of the monthly astronomy magazines, or advice can be sought from members of astronomical societies. Generally, aperture is more important than magnification, and a low power sharp image is preferable to a mushy high power one. Typically the highest magnification a commercial telescope can be expected to utilise is about 200x, more than enough to show the wonders of Lyra to good effect.