Do you know your neighbourhood well? Most people can look out of their windows and see where their neighbours live, maybe know the names of some of them. In the galactic scheme of things, this is a very small picture. If you now think of the planet Earth as your house, and imagine looking out of the window of our sky, we can see some more of our neighbours. Shining brightly above us are Mars, Jupiter, Saturn, Venus and Mercury, all dwelling in the same neighbourhood, all revolving round a common centre: the Sun. So if you like, the Solar System is our ‘neighbourhood’. In towns and cities there are many different neighbourhoods, and the same is true of our place in the ‘big picture’. Stars (like our Sun) form from massive clouds of dust and gas, which collapse in on themselves as gravity acts upon them. Dense, hot cores develop, and within them nuclear fusion reactions occur which cause new stars to burst into life. Not all the dust is used up in this process, and the remnants may eventually form planets, comets or asteroids. This happens billions of times over, and the resulting body of stars, interstellar dust and gas, and other materials, all gravitationally bound, is known as a galaxy.

Our particular galaxy is very large, and contains somewhere between 200 and 400 billion stars! It has a central ball-shaped bulge, and a flattened disc that spreads out around the centre. It has been described as being like two fried eggs stuck back to back! Its diameter is 100,000 light years, and with 1 light year equivalent to 9,500,000,000,000 km, you can see that it is truly vast. The disc is not uniform in density. There are areas where stars are grouped closely together, and other regions that are more sparsely populated. If we could stand a long way back, and look down on our galaxy, we would see that the disc contains a spiral structure, similar to the effect seen when adding cream to swirling coffee. Our Sun, and therefore our neighbourhood, is in one of the spiral ‘arms’, known as the Orion Arm, because it extends out in the direction of the stars that make up the constellation of Orion. 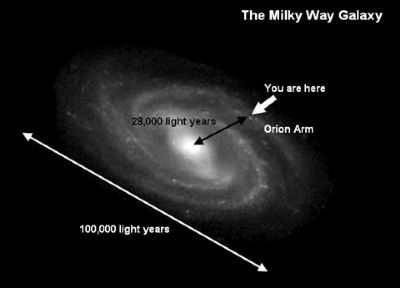 We could consider ourselves to be in the suburbs of our Galaxy, about 28,000 light years from the central core, and about 20 light years above the plane of the flattened disc. This location comes with very attractive views, as we are able to look out and see the plane of the disc extending around us as a long narrow band of stars that meanders across the night sky. This softly glowing band of starlight reminded people of milk that had been spilled along a path, so they referred to it as the Milky Way. We still call it that today, and we know our home galaxy as the Milky Way Galaxy. (The word ‘galaxy’ comes from the Greek word ‘galactos’, which means- Milk)! By looking inward, towards the constellation of Sagittarius, we are looking towards the huge central bulge of the galaxy, at the centre of which is thought to be a super-massive black hole.

The Milky Way contains many bright stars that stand out against the general background star-glow. The constellations use bright stars to mark their shapes, so it is to be expected that several constellations find their homes against the backdrop of the Milky Way. Bright stars such as Deneb in Cygnus, Altair in Aquila, Vega in Lyra, Caph and Ruchbar in Cassiopeia, Mirfak in Perseus and Capella in Auriga can all be used to trace the path of the Milky Way across the sky. In autumn the Milky Way stretches directly overhead when viewed from our latitude, and is clearly visible against the dark sky background. In the spring though, it arcs across the sky much closer to the horizon. Its elevation in the sky changes through the seasons because the Earth does not orbit the Sun in the same plane that it rotates in. The Earth’s orbital path is ‘tilted’ at an angle of 23.5 degrees with regard to its axis of rotation. This is why we have seasons, and is also why celestial objects will appear at different elevations in the sky at different times of year.

If you are lucky enough to be away from street lights on a moonless night, the Milky Way can be just bright enough to cast shadows, and its path across the sky can be so densely packed with naked-eye stars that it becomes hard to distinguish the shapes of the constellations. Even without optical aid this view is stunning. With a pair of binoculars or a low power telescope, it is possible to cruise along the river of starlight. You will discover scattered open clusters, great star-clouds like those in Sagittarius, and even patches of dust like the Great Rift in Cygnus, that obscure the stars behind them and appear dark. Unfortunately, such views are becoming more rare, as light pollution is spreading out from our towns and cities and intruding on the rural areas from which the Milky Way used to be so easily visible.

Returning home, one of our closest neighbours has just come to call. On October 30th, Mars was at its closest point to us in its orbit, and is now beginning to draw away as it continues in its voyage around the Sun. It is very bright, shining in the East in the constellation of Aries, and is currently large enough to show considerable detail when viewed through a telescope. Enjoy the view now, as this particular neighbour will not pass by this close again until 2018- and that’s a long time between get-togethers! In fact you may wish to join us for a public Mars viewing session at the Highlands Astronomical Society Observatory on Friday 4th November, from 8pm ‘til 11pm, when you will be able to use Society telescopes to view Mars. This does depend on the sky conditions at that time, so if the sky has sufficient clear patches (in the right place) and is dry then viewing will take place. If it is raining or completely clouded, then it will not. Let us hope for the former…