“Candlemas Bull” was the name traditionally given to the constellation Taurus (the Bull) by medieval Scots as it travelled across the sky on Hogmanay. There are many such references to this important constellation. Some date back as far as 6000 years and it is therefore thought that Taurus may well be one of the very first constellations recognised. Indeed, the bull appears in many ancient cultures, andit is even thought that the Pictish engravings of a bull found in Burghead in Moray may indeed relate to its celestial appearance. 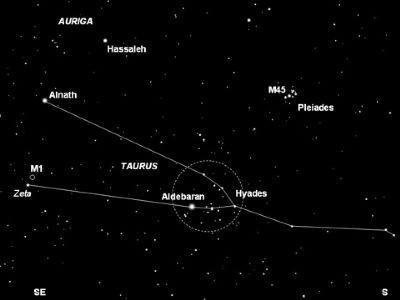 Taurus is a great object for the astronomy enthusiast. It contains a number of very interesting objects, of which most can be easily seen with the naked eye, and are really stunning in even the simplest binoculars. Perhaps the one that many people are most familiar with is a small patch of tightly clustered stars, the Pleiades. They’re sometimes also called the Seven Sisters, after the half sisters of Hyades, who, according to Greek myth, were saved from mighty Orion’s pursuit of them by being transformed into a group of doves by Zeus.

French astronomer Charles Messier noted this group of stars in his famous catalogue as number 45. On a dark and clear night, most people are able to make out 6 or 7 stars, while others claim they can see up to 11 stars, or even more. In reality this cluster may contain well over 300 stars. A lot of the brighter ones are a magnificent view when seen through simple 7x50 or 8x50 binoculars. As far as star clusters go this one is relatively close, only slightly more than 400 light years away, and therefore bright.

The Pleiades is a prime example of a so-called galactic or open star cluster. These clusters are formed when stars are born together over a relatively short period from the same cloud of dust and gas. Member stars of these clusters can be identified, as they all appear to move at the same speed and in the same direction through space. There are many such clusters, but the Pleiades is one of the very few that can be resolved with the naked eye. In even modest telescopes, you may be able to spot faint nebulosity around the brightest of the stars.

As luck will have it, Taurus is also home to another galactic cluster that is easily resolved with the naked eye and thought to be the second closest star cluster in the sky, with only the Ursa Major Moving Group being closer. This cluster is known as the Hyades and is easily identified as the group of stars with and obvious V shape that forms the “head” of the Bull of the constellation. At one of the tips of the V is a very bright orange tinted star, Aldebaran. It is the 13th brightest star, and is not actually part of the cluster, but a chance encounter between the star and the cluster, with the star about twice as close to us.

The Hyades cover a large part of the sky. A survey has indicated that stars in a region as large as the entire constellation are member of this cluster, which contains well over 400 stars. The cluster is moving away from us at some speed and towards a point in the sky near Betelgeuse in Orion. In 50 million years time, the Hyades will be so far away that we would need a telescope to be able to see them. Again, the Hyades are a great object for binoculars.

One of the most celebrated objects in Taurus is no doubt M1, or the ‘Crab Nebula’. It was discovered by an English amateur astronomer in 1731. It was this nebula that spurred Charles Messier in 1758 into action to make his famous list of deep sky objects, to make sure that he and other astronomers would not mistake them for comets. It took until the beginning of the last century to find out the exact nature of this cloud like object. In 1921 it was discovered from photographic plates that the nebula was expanding at an alarming rate. The outer parts of the nebula are flinging into the surrounding space at a rate of about 50 million miles per day.

Using this knowledge it was established that the nebula must have formed in an enormous stellar explosion some 950 years ago. Evidence of this was found in Chinese chronicles, when a bright “new star” in this very location was seen on 4 July 1054. This event was, however, never mentioned anywhere in European accounts of that time.