Mercury, Messenger of the Gods

Mercury is the Formula One champion of the solar system. It races around the Sun in just 88 days, faster than any other planet, and that is the reason why the Romans named it after the swift-footed messenger of their gods. By turning on its axis once every 58.65 days, Mercury’s rotational period is exactly two thirds of its orbital period giving Mercury a ‘day’ (from sunrise to sunrise) that lasts 176 Earth days or two of Mercury’s years.

Determining Mercury’s exact position in its orbit has proved impossible using Newton’s Laws of Gravitation, even though they could be employed successfully when calculating the positions of all the other planets. Einstein realised that space is distorted and curved near massive objects and that this distortion is the cause of gravity. The Sun is a massive object and distorts space just enough to produce a gravitational effect that alters Mercury’s orbit slightly from that predicted by Newton; an amount exactly predicted by Einstein, verifying his General Theory of Relativity.

Smaller than Ganymede and Titan (satellites of Jupiter and Saturn respectively) and not much larger than our Moon, Mercury is the second smallest planet in our solar system, yet it has a core of iron as large as Earth’s. Scorching temperatures of 450 C, almost twice as hot as a domestic oven, sear the barren surface of the Sun’s closest companion, but because there is only a very tenuous atmosphere, as night falls the heat is lost, and temperatures can plunge to a chilly –180 C.

Covered with impact craters, this small planet resembles our Moon, however, whereas the mountains of the Moon are pockmarked with craters, those on Mercury’s upland regions are interspersed with large areas of gently rolling intercrater plains. About two kilometres below the mountains are areas of relatively flat, smooth plains that may be volcanic in origin.

The largest impact crater is the Caloris Basin at 1,340 km in diameter. It was created about 3.85 billion years ago when a large piece of solar system debris slammed into the planet with such force that shockwaves travelled through and around the surface, dissipating at a point opposite the impact. The resulting mercury-quake disrupted the ground so badly that it broke up into giant blocks. Known as “weird terrain”, it is not found anywhere else in the solar system.

The most distinctive features on the surface are long, winding cliffs, tens to hundreds of kilometres in length and from 100 m to over 1.5 km in height. It is thought these great scarps were created when gigantic blocks of crust were thrust skyward as the entire planet shrank as it cooled, leaving behind a wrinkled surface.

Only 45% of this petite planet has been imaged so far. This was by Mariner 10 in the 1970s when it flew past three times but on one side only. So what’s on the other side?

If all goes according to plan, we should find out in the next few years.

NASA’s Messenger spacecraft left Earth in August 2004 but won’t reach Mercury until 2011. Manoeuvring into orbit around the innermost planet is no easy task, with the Sun’s huge gravity waiting to pull it in. It first has to match Mercury’s orbital speed by using the gravity assist of Earth and Venus as it flies past. Importantly, this also reduces the amount of fuel required, making the mission possible with current technology. Then once it reaches Mercury it has to slow down sufficiently so the spacecraft can be successfully ‘captured’ into orbit around the planet. Messenger now enters a very hostile environment with high temperatures and intense radiation but special shielding allows the spacecraft to withstand these conditions.

Before Messenger arrives it will fly past Mercury three times, mapping virtually the entire planet in colour, including those areas unseen by Mariner 10. Once in orbit, the surface, atmosphere and magnetosphere will be studied, providing some of the first data from Mercury for nearly 30 years. Messenger hopes to answer questions about Mercury’s core, magnetic field, geological history and thin atmosphere, and reveal whether ice actually exists at its poles. 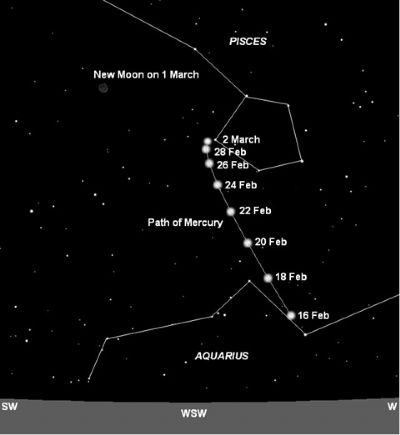 Finding Mercury in the sky is actually quite difficult to do and many Astronomers have never seen this elusive planet. Closely orbiting the Sun, it never appears further than 28 degrees away in the sky; an angle which is less than that made by the hands of a watch at 1 o’clock, and as it closely follows or precedes the Sun it can be seen only during twilight – just after sunset or just before sunrise.

There are times when Mercury reaches its greatest angular distance from the Sun as seen from our vantage point on Earth, and when the ecliptic – the apparent path of the Sun and planets across the sky – is inclined more vertically with respect to the horizon. It is at these times that Mercury appears higher in the sky and becomes easier to spot. The next time this is due to happen is in late February this year, so look out for Mercury in the evening sky just after sunset for about a week before and a week after 24th February. However, never look for Mercury using binoculars or a telescope when the Sun is still visible – you could blind yourself.