The constellation of Leo is magnificent, not only in terms of the amount of sky it covers, but also the number and type of celestial objects it contains and the mythology it originates from. The constellation represents the lion monster from Greek Mythology that was the offspring of Orthrus and Echidna (one of many monsters that were to issue from Echidna- Chimera, Medusa and Hydra were some of the others) and was sent to ravage the area around Zeus’s temple in Nemea. It was the first of Hercules’s ten labours to slay the beast, which he did with his bare hands, as the creature was impervious to weapons. Having completed the task, Hercules skinned the monster using its own claw, and wore the skin to protect him from the weapons of others. To commemorate his victory, Zeus placed the lion among the stars. 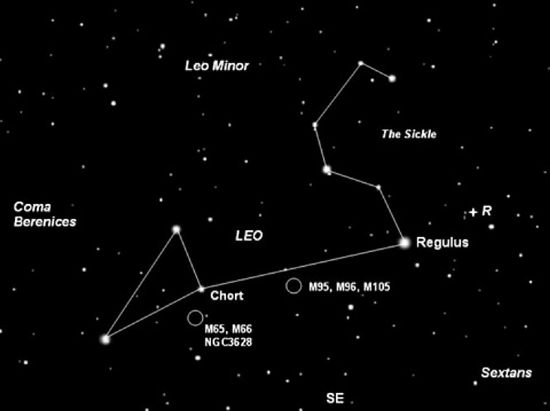 The constellation is conspicuous in the east during March nights, and it does indeed resemble a great lion lying on its haunches and facing Cancer, the crab. There are several bright and interesting stars in the constellation. Alpha Leonis, or Regulus (meaning little king), marks the lion’s heart, and was previously known as Cor Leonis for that reason. It is a bright star, shining at magnitude 1.35, and is 3.5 times larger and more massive than our Sun. It is a multiple star too, having a companion that completes an orbit around Regulus every 130,000 years or so- and the companion is also a double, with its own companion orbiting it every 1000 years! Regulus lies on the ecliptic, the path across the sky that the Sun, Moon and planets follow. It is therefore frequently the subject of planetary or lunar conjunctions or occultations, when the Moon or a planet will pass near to, or in front of, the star.

R Leonis, which lies about 5 degrees (10 full-moon widths) west of Regulus, is a long period Mira variable star. Over a period of 313 days it goes from dim magnitude 11.3 to bright magnitude 4.4 and back. This variance can be followed in a small telescope, and it is remarkable to think that at its maximum brightness the star is 575 times more luminous than it is at its minimum! R Leonis will be at its brightest again on 15th April, and is worth looking out for, if only for its unusual red-violet hue.

If you just quickly scan the area with a pair of binoculars, you will probably notice a severe lack of open or globular star clusters, and to the naked eye the region does seem a bit empty apart from the distinctive lion-shaped asterism. Leo lies in a part of the sky that is poor in these types of object, but extremely rich in galaxies. In fact, if you are a galaxy hunter you will find many treasures there, no matter what type of optical aid you use. Many of them will show a wealth of detail in larger telescopes (8 inch aperture or more), and a fairly large number will reward users of smaller telescopes, such as 3-inch or 4-inch refractors, too. There are even some that will be visible through 10x50 binoculars on a good dark night!

This is because the constellation lies on the borders of the Virgo cluster of galaxies, and you are looking deep into intergalactic space, well beyond the environs of our own Milky Way galaxy. Several of the galaxies are ones that Charles Messier noted in his catalogue of nebulous objects which he made when hunting comets in the 18th century, but others are New General Catalogue objects, or NGC’s, some of which are just as noticeable as some of Messier’s galaxies.

Some are more easy to find than others, particularly the very attractive group of M65, M66 and NGC 3628- the famous Leo Triplet that lies about 2.5 degrees south of Theta Leonis, known as Chort. A trio of spiral galaxies, they lie in different orientations to us, but are actually at about the same distance away, at 30 million light-years or so! The spiral arms are most easily seen on M66, which is almost face-on to us, but a medium to large telescope will be required to see them easily. NGC 3628 is almost edge-on to us, so appears fainter, but has a conspicuous dark dust lane along its width. Observations made with radio telescopes have confirmed that these three galaxies are actually interacting with each other, and it is thought that they will eventually merge into one huge region of star formation.

Halfway between Regulus and Chort, and slightly south, is another area that contains a large group of galaxies, including M95, M96 and M105, as well as a handful of NGC galaxies. In fact, there is barely a space within Leo that a galaxy isn’t visible if you are using a reasonable wide-field view! All of these galaxies have slightly differing appearances in a telescope, as they have subtly different formations, or lie in different orientations to us and/or at different distances.

The variety is quite startling, and once you begin to explore the dark patches between the stars that mark the constellation of Leo, you will soon become hooked as a deep-sky big game hunter and the time spent at the eyepiece will soon slip by!