The Birth of New Stars

Hidden deep within the huge clouds of gas and dust that are scattered throughout our Galaxy, the secret process of star birth is taking place. Secret, because these clouds obscure the visible evidence of new stars forming, although it is possible to ‘see’ the heat generated by the young stellar objects in infrared wavelengths. It is only when they are almost fully-fledged stars that they start to reveal themselves by creating beautiful glowing nebulae.

Dark patches, sprinkled between the numerous stars of the Milky Way, are not areas devoid of stars, but are actually clouds of the dust-laden gas from which new stars will form. Examples include the Coalsack in the southern hemisphere and the Horsehead Nebula in the constellation of Orion. Smaller dark blobs, also clouds of gas and dust, are found in large bright nebulae such as the Orion Nebula (a well known area of star birth) and are known as Bok globules.

As a cloud contracts, it starts to break up into a number of slowly rotating, differently sized fragments and as these continue to collapse further, each becomes denser and hotter. These fragments are now known as protostars, and although large and glowing red, cannot be observed visually as they are still embedded within their original cloud of material. For as long as gas from the surrounding cloud is available, the protostar will continue to grow.

Eventually, the outer layers of the protostar begin to collapse inwards, reducing its size but increasing its temperature. At this point many, possibly all, develop a powerful stellar wind, which blows away the surrounding gas and dust cloud allowing them to become optically visible. It now becomes apparent that at least the small to medium sized stars vary in brightness at this stage.

The stellar wind is often channelled into two oppositely directed streams, known as a bipolar outflow, due to the presence of an extensive, flattened circumstellar disc surrounding the protostar. It is this ring of dusty material that is thought to give rise to planets and a few of these discs have in fact been photographed by the Hubble Space Telescope whilst looking deep into the heart of the Orion Nebula.

It can take up to ten million years before the centre of a protostar becomes hot enough (15 million degrees C) for nuclear fusion reactions to commence and for a star to be born. It now becomes stable, no longer varying in brightness, with the gravitational contraction being balanced by the outward pressure created by the nuclear fusion from within the star.

Some protostars are too small to generate the high temperatures required for nuclear fusions reactions to occur; these failed stars are known as brown dwarfs, which are in fact no more than very large and very hot gas planets. Stars range in size from the smallest at about 8% the size of our Sun – these are relatively cool – all the way up to very massive, extremely hot stars, 80 to 100 times the size of our Sun. 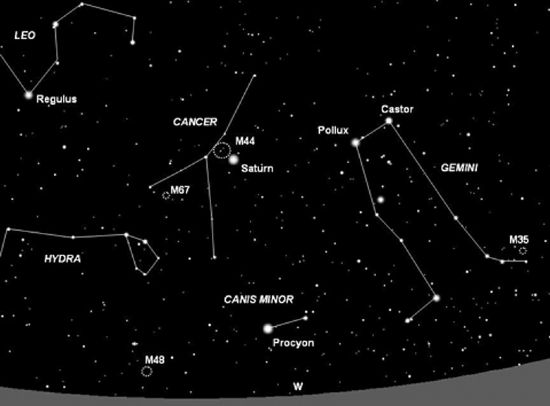 The clouds of gas and dust from which these stars formed, start to glow red, green and blue, energised by the hot, newly born stars and result in the beautiful nebulae that pepper the sky.

The Hubble Space Telescope has taken some wonderful photographs of these star nurseries. The Eagle Nebula (the photograph of which is known as the ‘Pillars of Creation’) is one such place. Here we see long fingers of gas, which have been sculpted by the intense radiation of young, hot stars that were born nearby. The gas is gradually being ‘boiled’ away into space, slowly revealing newly born stars emerging from their dark cocoons.

No star is born in isolation so the eventual outcome of a collapsing gas and dust cloud will be groups of stars of varying sizes that have been born at the same time. These so called open star clusters are found in the spiral arms of the Milky Way, as it is here that large amounts of gas abound.

A great example currently visible is the Beehive Cluster or M44 in the constellation of Cancer, which is thought to be two colliding clusters. It is quite easy to find as the planet Saturn is currently shining brightly right next to it. Other clusters you may want to try to see using a telescope are M67, also in Cancer and M35 in Gemini. Even most of the stars of The Plough (Ursa Major) are thought to be a cluster of stars, as they all appear to move in the same direction through space.
All open star clusters are relatively young because they would have otherwise dispersed. Our Sun is now middle aged but it would once have been part of a cluster, perhaps together with Alpha Centauri.