Have you ever looked up into the early evening sky just as darkness is beginning to fall, and noticed the very first stars peeping through the gloom? Have you then waited and seen many more slowly join them, until there are dozens or hundreds of stars shining through the darkness? Why do you see some first and have to wait until it’s properly dark to see the others? Well, because some are brighter than others. People have realised this for a long time, and the different brightnesses of stars is an interesting facet of astronomy.

You may have read of stars being described as ‘magnitude 1’ or ‘3rd magnitude’ or similar. ‘Magnitude’ is what we call the brightness of a star or celestial object, and is measured on a numerical scale. It all goes back to a Greek astronomer called Hipparchus, who, in about 120BC, compiled the very first catalogue of stars. Of course he had no telescope, so was limited to about 850 or so stars, but he ordered their brightness (or magnitude) from 6 (the dimmest he could see) to 1 (the brightest).

As astronomers began using telescopes and detected more and more stars, they increased the number of magnitudes, and today ground-based telescopes can detect stars as dim as 22nd magnitude. Magnitudes are separated by a factor of 2.5, so a 1st magnitude star is 2.5 times brighter than a 2nd magnitude one; or 2.5 x 2.5 x 2.5 times brighter than a 4th magnitude one, and so on. It can therefore be calculated that if the dimmest star we can detect with a big telescope is now 22nd magnitude, and Hipparchus was limited to magnitude 6 with his naked eyes, that we can now see stars that are nearly one million times dimmer than those that poor old Hipparchus was limited to! Also, the bright end of the scale has also been extended, so we have magnitude 0 stars, and even brighter ones with negative magnitude values. Vega, the principle star in the constellation of Lyra, is magnitude 0 and is often used as a benchmark against which other stars are compared. The brightest star of all is Sirius in the winter constellation of Canes Minor. The Dog Star shines at magnitude –1.42 and our own Sun blazes away at –27!

But this is all slightly ambiguous, as how bright a star will appear to us often depends on how far away it is. They are all at vastly different distances from us, so a star that appears very dim to us now because of its distance would appear much brighter if it was closer to us. To get to grips with this, astronomers decided to call a star’s visually perceived brightness its ‘apparent magnitude’ and its real or actual brightness its ‘absolute magnitude’. This is defined as how bright the star would be if it were at a distance of 33 light years (10 parsecs) from the Earth. This is why the Sun appears so bright- because it’s very close to us, only about 7 or 8 light-minutes away. If it were placed 33 light-years away instead, it would then appear to be much dimmer at only magnitude 4.8. Therefore, the Sun’s absolute magnitude is only 4.8 although its apparent magnitude of –27 is very much brighter than that.

So, when you watch the stars appearing in the twilight, you will spot a star of magnitude –1 or 0 before a 1st magnitude one, and a 1st magnitude star before one of 3rd magnitude, and so on. Just as Hipparchus’s eyes were limited to magnitude 6, so ours are today, and that’s only if you are away from streetlights and the skyglow caused by ‘civilisation’.

Once you get into the habit of noticing the different brightnesses of stars, it becomes instinctual to try to gauge the differences between them. Some stars actually have magnitudes that change over time, and it can be fascinating watching them slowly (or quickly in some cases) brighten or fade. They are known as variable stars, and a constellation with some of interest is Corona Borealis, the Northern Crown. 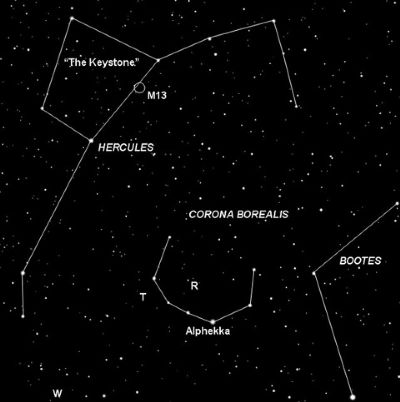 In Greek mythology this crown-shaped asterism represents the crown that was given to Ariadne by her divine husband Bacchus to commemorate her love and kindness, both to him as her husband and to Theseus, whom she aided in defeating the monstrous Minotaur of Crete.

In itself, the constellation is a very attractive one, being shaped just like a regal circlet. The brightest star in the circlet is Alphecca, shining at magnitude 2.2. This star is unusual in that it can be known by two names: ‘Alphecca’ comes from Arabic and refers to the broken nature of the crown (the asterism is not a complete circle), but its other name is ‘Gemma’, which literally translates as ‘Jewel in the Crown’.

Two rather more unusual stars in Corona Borealis are R and T Corona Borealis. R normally shines at 6th magnitude, the limit of naked eye detection from a good site, but every now and then it can drop to as dim as magnitude 14. The fluctuations are irregular and the star brightens again over several months to its original 6th magnitude. It is thought that this process is due to the build up of carbon in the star’s atmosphere and the condensation of dust that obscures the star’s light. Eventually the dust is blasted away by the radiation from the star and the light shines through brightly again.

T Corona Borealis (or the Blaze Star) is thought to be a recurring nova, as it normally shines at magnitude 10.8, but has twice flared up- to magnitude 2 in 1866 and magnitude 3 in 1946. It is unpredictable, but a brightness increase of that ‘magnitude’ is certainly noticeable so it is definitely a star to keep your eye on.