Shifting Curtains In The Sky

The Sun may appear quiescent when viewed telescopically through solar filters but in reality it is a seething, bubbling cauldron of high-energy particles, which explode from the surface every so often, flinging material out into the cold depths of space.

Even when the Sun is not having temper tantrums, it is so hot and dynamic that it cannot hold onto its atmosphere, which streams relentlessly outwards. This is known as the solar wind, which consists of energetic, charged particles, mostly electrons but also some protons.

The solar wind continuously buffets the Earth’s magnetic field, which acts as a force field, protecting us from the Sun’s deadly radiation. However, some of these particles spiral down the Earth’s magnetic field lines, crashing into the atoms and molecules of the upper atmosphere. These atoms and molecules absorb this radiation then release it again in the form of coloured light. This is what produces the aurorae, also known as the Northern or Southern Lights.

There is a persistent auroral oval surrounding the north and south poles that varies in brightness and can be seen from high latitudes during a clear night. Sometimes it is barely visible, whereas at other times certain events on the Sun’s surface trigger a marked response. A solar flare, which is an enormous explosion or coronal mass ejection, which is a huge bubble of gas ejected from the Sun, can both cause the aurora to brighten and push the oval southwards so that we in Scotland can be treated to a stunning display of nature’s light show.

There is a link between auroral activity and the sunspot cycle. The number of sunspots increases and decreases over a period of eleven years. Around the time of sunspot maximum, the Sun can be subject to intense solar storms so that occasionally the aurora extends towards the equator, painting the skies with intense displays of colour in many southern regions.

The colours seen in an aurora depend on which atmospheric gas (either oxygen or nitrogen) is struck by the Sun’s energetic particles and how hard the atom or molecule is hit. Red light is emitted by oxygen atoms above about 200km but our eyes are not very sensitive to this particular wavelength and it is not easily seen – photographic film, however, picks it up nicely. Between 100 km and 200 km, oxygen atoms emit green light, the colour our eyes are most sensitive to and the one we usually associate with the aurora. Below about 100 km there may be a purple-red edge to the aurora due to a mixture of blue and red emissions from nitrogen molecules.

The aurora has many different shapes and structures, which can change very quickly in time. The display of light may appear as a long arc, which then morphs into waves and bands or even long thin rays that seem to shoot skywards. When there is a strong geomagnetic storm taking place the aurora may appear overhead and then it looks like a giant starburst or chrysanthemum – a truly spectacular vista.

Since the aurora is seen in the northern part of the sky from the northern hemisphere and the southern part of the sky from the southern hemisphere, some of the circumpolar constellations are often visible through it. If you can’t see the stars through the light show then the glow may in fact be due to light pollution reflecting off low cloud and not the aurora at all. These constellations are known as circumpolar because they circle the pole and, from our latitude, can be seen all year round. The Plough is probably the most well known, although it is actually not a true constellation but an asterism, which is an easily recognised group of stars within a constellation. The Plough is part of Ursa Major, the Great Bear. 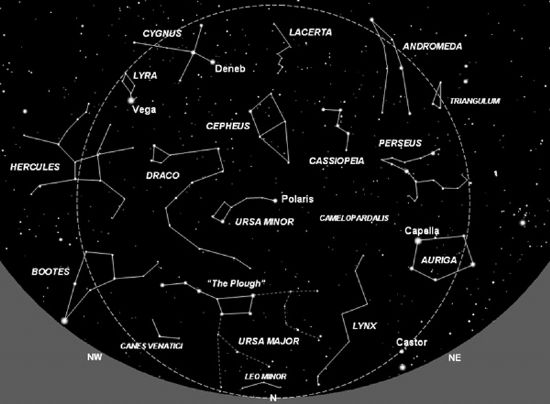 Other circumpolar constellations in the northern hemisphere include Ursa Minor (Little Bear), Cassiopeia, Cepheus and Draco. Ursa Minor contains the pole star, and can be found using the pointers in the Plough. The whole sky appears to rotate around the pole star which has for centuries been used to find north.

It always has the same elevation in the sky as the latitude from where it is being viewed; at the North Pole it appears to be directly above at an elevation of 90 degrees; at the equator it appears to be on the horizon at 0 degrees. In Inverness, its elevation is 57.30 degrees, which is also our latitude. Contrary to popular belief, the pole star is not the brightest star in the night sky – that honour belongs to Sirius.

Cassiopeia is the ‘W’ or ‘M’ shaped constellation depending on the time of year. At 9pm during the month of October, it is on its side, although as the night goes on it appears to move downwards and then will look like a ‘W’. Cepheus is shaped rather like a house and is just below the pole star whereas the Plough is high in the mid evening sky.

Whilst identifying the circumpolar constellations, take time to look for the aurora. It is best seen in a clear, dark sky around late evening and into the early morning (if you say so!) although if the sun’s weather is particularly stormy, it will be earlier. The time around the autumn and spring equinox are good times to see the dancing lights even during sunspot minimum which is where we are now. However, as we approach sunspot maximum over the next five years, the Sun will become more active and the chances of seeing the aurora will increase greatly.