On a clear dark November night, high up in the southern sky in the constellation of Andromeda, you might spot a curious slightly elongated little hazy patch of light. The earliest recorded documentations of this object date as far back as the 10th century, when Persian astronomer Al-Sufi described and depicted it in his “Book of Fixed Stars”. He called it the “Little Cloud”. It took nearly another 1000 years before the truth of this now famous object came to light.

The “Little Cloud” appeared again on a Dutch star map in 1500. Comet Hunter Charles Messier, famous for his catalogue of hazy objects, recorded it on August 3, 1764 as M31, or the 31st object in his catalogue. It was long believed that the “Andromeda Nebula”, as it was then called, was one of the nearest objects of its kind. William Herschel wrongly believed that its distance did “Not exceed 2000 times the distance to Sirius”. Nevertheless, he was the first person who believed that it may be an “island universe” like our Milky Way, which he thought was a disk with a diameter of about 850 times the distance to Sirius and a thickness of about 155 times that.

William Huggins, a pioneer in Spectroscopy, found in 1864 that unlike other nebulae, the Andromeda Nebula showed a continuous spectrum, providing the first real evidence of the stellar character of the Nebula. Twenty-three years later, Isaac Roberts made photographs showing the spiral structure. It still took until 1923 for Edwin Hubble to show by using so called Cepheid variable stars in the Nebula that it was an extra galactic stellar system (galaxy).

At 2.4 Million light years distant, the Andromeda Galaxy, as we now know it, is the furthest object anyone can see with the naked eye. Rivalling our own Milky Way in size, the Andromeda Galaxy has a diameter of about 250,000 light years, and contains over a 100 thousand million stars. It is a spiral galaxy, presented almost edge on to us at an oblique angle of about 15 degrees. This is why we see it as an elongated object; its spiral structure is not immediately obvious. It is, however, very bright as far as deep space objects go and it is truly magnificent in a pair of binoculars. An amateur telescope at very low magnification may provide some detail in the spiral structure of this gigantic star system. Very low magnification is required, because the apparent size of this object is about 3 degrees, which is no less than 6 times the apparent size of the full moon! Conversely, by employing very high magnifications with very large telescopes, it is actually possible to detect many globular clusters within the confines of this other galaxy!

M31 is a member of our Local Group of galaxies, which consist of three major spiral galaxies: our own ‘Milky Way’ galaxy, M31 in Andromeda, and M33 in Triangulum. M33 is only a short distance from M31 in the sky and easily visible in binoculars, and quite superb in small telescopes. The local group also contains a host of smaller, irregularly shaped satellite galaxies, of which the two most famous are the small and the large Magellanic Clouds, which sadly cannot be seen from our latitude. But M31 has a various satellite systems too; two can be seen in small telescopes, M32 and M110. The latter is quite faint and slightly further away from the centre of M31, while M32 may be seen in binoculars as a bright knot at the edge of M31. 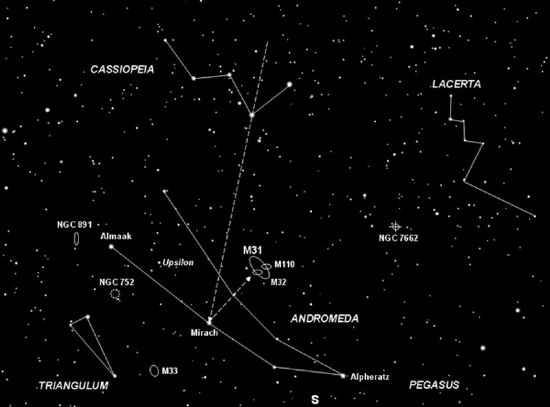 For the more adventurous amateur astronomer, Andromeda has also got a picture perfect edge on galaxy, NGC 891, which appears as a narrow spear of light in larger amateur telescopes.

And it doesn’t end there when it comes to the riches of Andromeda. The constellation contains a nice star cluster (NGC 752) and an easy planetary nebula (NGC 7662) too. It is quite remarkable that Messier never discovered this nebula, as it is a quite bright, greenish looking fuzzy patch of light. It does require a bit of magnification though, which adds to the challenge.

Finally, it is worth trying to find Upsilon Andromedae. This 4th magnitude star, at a distance of 44 light-years, was the first around which professional astronomers detected several planets.