As the autumn months turn to winter ones, the skies reward our cold, frostbitten telescopic vigils with some of the most beautiful views in the heavens. Winter is traditionally the season of the ‘big name’ constellations of Orion the Hunter, Gemini, Leo, Taurus and Auriga, but there are other lesser known constellations up there that may require just a little more patience to trace out, but which contain some deep sky objects that are just as magnificent as their more famous counterparts.

One such constellation is Monoceros, the Unicorn. Now wouldn’t it be fitting if this constellation depicted a gigantic and elegant horned equine beast, fresh from the pages of Homer or Virgil, shining gloriously from the northern skies with bright stars and scintillating star clouds marking its flowing mane? But sadly, this is not the case.

In fact, the constellation is vaguely defined at best, and has no stars brighter than 4th magnitude. Furthermore, there are no definitive mythical tales that relate to it to justify its presence in the sky at all, and so we are left with a constellation that has a grand name, but which requires some effort and enthusiasm to explore. But exploration of Monoceros is nevertheless certainly justified – the kingpin constellations do not have a monopoly on beautiful celestial objects, after all.

One of the photographic showpieces of the northern sky resides in Monoceros, and it is also a delight to observe visually as well. The Rosette Nebula is big, extending to about 1 degree across, which makes it far larger than the apparent size of the full Moon. Within this degree-wide area of nebulosity are four distinct features, each bearing their own NGC catalogue numbers. 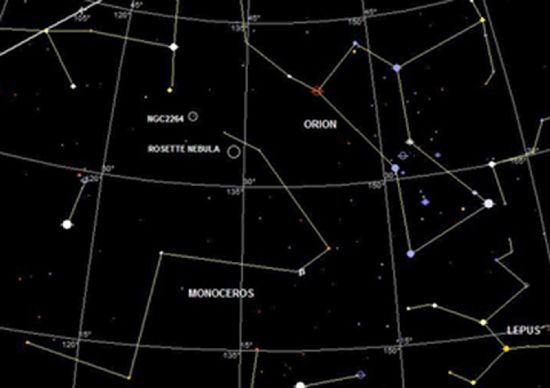 NGC 2244, perhaps the most obvious one, is an open cluster of hot, young stars, recently formed from the vast cloud of nebulous material that they illuminate. Star birth in this area is still taking place, so this cluster of young, energetic stars is still growing. The cluster is easily detected in a small telescope or binoculars, and when using an eyepiece with a wide field of view it is a stunning sight, especially when you consider the star creation processes taking place there.

Not so obvious to the telescopically aided eye, but readily apparent on even short-exposure astronomical photographs, are the dark rifts or clouds that stand out against the brightly glowing background of hydrogen and other gases. These dark snake-like patches are actually only the darkest, most densely packed parts of a huge field of dust that lies between the nebula and us. If that dust were not there, the stars within the cluster would appear that little bit brighter to us, and the cluster might be as impressive as another more famous open cluster, the Pleiades.

Another region of exquisite, yet subtle, beauty lying within Monoceros is quite appropriate to this time of year. NGC 2264 consists of a cluster of stars that are shaped in a triangle, very much like a Christmas tree! The brightest star in the cluster is S (or 15) Monocerotis at magnitude 4.6. It is a shame that it does not lie at the top of the ‘tree’ but we can always imagine it represents a particularly shiny present instead! The cluster bathes in the glow of nebulosity, just like NGC 2244 does, but at the top of the ‘tree’ asterism is a triangular dark region that seems to cut right into part of the brighter nebula. This dark wedge gives that region its name – the Cone Nebula. This area is also well worth studying with a small (or large) telescope or binoculars. Bear in mind though, that patience is required when viewing these nebulous areas, as the more time you spend at the eyepiece, the more your eye will detect and show you.

If you want a slightly easier target and a quicker fix, then point your telescope towards Beta Monocerotis. Beta is a triple star. It consists of a brighter ‘A’ component shining at magnitude 4.6, and a slightly dimmer pair (‘B’ and ‘C’) of about 7.4 arc seconds away that shine at magnitude 5.5. As you slowly increase the magnification of your telescope, you will notice the separate stars begin to elongate and finally to resolve as distinct, individual points of light with the blackness of space between them. All three stars that make up Beta are hot blue-white ones, making them appear quite similar to each other at the eyepiece, but consider that the ‘B’ and ‘C’ stars are thought to orbit each other, while the ‘A’ star is merely in the line of sight to make it appear to be related to the other two.

Such coincidences occur quite often in our sky, but they do not make the vistas that they provide any less beautiful or thought provoking for it. We should merely shrug our shoulders at the serendipity of it all and enjoy the view!