The Occultation of the Seven Sisters

Once in a while a solid body from within solar system will move in front of one of the brighter stars. This happens regularly, but remarkably, despite the number of stars, not as often as you would think. Astronomers get very excited about this though, because apart from it being quite a sight in its own right, there is a lot that can be learned from these brief encounters.

The word astronomers use for this phenomenon is occultation. In effect a solar eclipse is an occultation of the Sun by the Moon. However, occultations of distant stars are the main object of our interest here. Stars can be occulted by various bodies in our solar system. Besides the Moon, asteroids often cause occultations. But stars can also be occulted by the planets, although these occultations are more difficult because the planets tend to be bright, and so the stars they occult may disappear in the glare of the planet itself.

Occultations are interesting because there is a lot that can be learned from them. When stars are occulted by asteroids it is possible to use the precise timings of these occultations to calculate the size, orbital elements and even the shape of these objects. This is done by making observations of the same occultation from different locations on Earth. Because the occulting object is much closer than the star, the different viewpoints will result in different timings. By adding up all the results a picture of the shape and position of the asteroid can be calculated.

Most of the occultations by asteroids are events that can only be viewed with a telescope. When the asteroid is invisible (the star is much brighter than the asteroid), the visual effect can be quite startling. Because the star is so far away, its light is concentrated virtually in a single point. When the asteroid moves in front of the star it blinks out practically instantaneously, and reappears in the same fashion. However, if the star is really bright, it may be possible to see a very fast decline and brightening. This is due to the fact that brighter stars tend to be bigger or closer, or both. They do then have an apparent size, which means that the covering by the occulting body is not instantaneous. This is a bit like when the Sun gets eclipsed by the moon, and it actually gets gradually darker. The apparent disk of stars is not normally visible in telescopes so astronomers can use occultations to measure the angular size of bright nearby stars by timing the decline and reappearance of the star.

Occultations by other planets can reveal interesting information about their atmospheres, because for a short period of time the star will shine through the atmosphere of the planet until it disappears. Even the colour of the star may change in that period, giving clues to the composition of these atmospheres and their densities. Another great type of occultation is the so-called grazing occultation by the Moon. If the Moon is only a thin crescent, and it occults a star with only the very top or bottom edge, it may be possible to see this star disappear and appear several times. This is caused by the mountains on the Moon. The star will simply peek through the valleys while the Moon moves along, making the star reappear briefly, before it gets hidden again behind the next mountain. 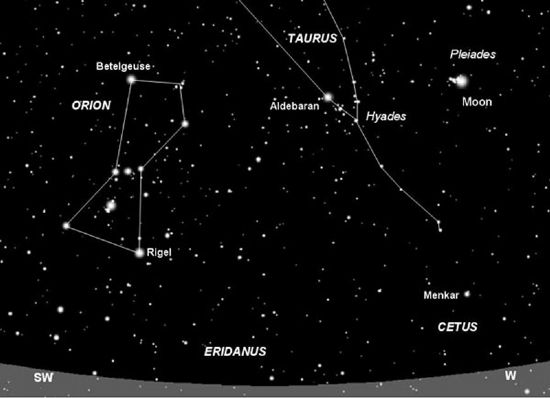 Once in a while a more spectacular occultation takes place, when a really bright star or group of stars gets occulted, which under good conditions may then be seen with the naked eye. Such an occultation is going to happen on 23 February. The moon, which will be slightly less than half, will go across a number of stars in the Pleiades in Taurus, also known as the Seven Sisters. The Moon will advance across this bright star cluster with its dark limb leading, and start occulting the brighter stars in the cluster by moving in front of Celaeno at about 10:30pm. The stars will start to re-appear along the edge of the bright limb about 45 minutes later. Although in theory it should be possible to see this with the naked eye, the glare of the half moon may make it difficult to see the Pleiades clearly enough. A pair of binoculars, however, should provide a ringside view. With binoculars you should be able to see fainter stars of the cluster being occulted from about 9:50pm onward.

Weather permitting, the Society will hold a public viewing session during this event on Friday the 23rd of February in the car park of the Culloden Battlefield Visitor Centre. The viewing will start at 9:30pm. Please note that there are currently building works taking place at Culloden Battlefield and extra care should be taken when entering the car park. There may also be limited space. Before you go, please visit www.spacegazer.com for the latest updates.