Buzzing around the solar system at the moment are numerous unmanned spacecraft on ambitious missions to investigate the various planets in our solar system.

The American (NASA) Messenger (which stands for MErcury Surface, Space ENvironment, GEochemistry, and Ranging) probe is on its way to the innermost planet Mercury. It has now completed 40% of its five year trip and its speed will continue to increase as it moves closer to the Sun. In mid October 2008 Messenger’s average speed will reach a new record of 63 kilometres per second. The first maps of Mercury’s unseen side will be made during 2008 by the probe on its first flypast but it isn’t due to enter orbit around the planet until 2011. The spacecraft will provide the first new data on the planet Mercury for 30 years.

About a year ago, the European (ESA) probe Venus Express arrived at the second planet from the Sun. Its main mission is the study of Venus’ complex atmosphere, which is laced with toxic sulphuric-acid clouds, and to search for active volcanoes. Already the probe has found an enormous, double lobed vortex, swirling around Venus’ south pole; which may be due to Venus’ super-rotation – when the atmosphere rotates faster than the rest of the planet.

Mars is currently being investigated by a number of spacecraft: Mars Odyssey, Mars Reconnaissance Orbiter (both NASA) and Mars Express (ESA) are all studying the red planet from above while the two NASA Rovers, Spirit and Opportunity continue to explore the planetary surface below. All of these spacecraft continue to find evidence indicating that water was once present. Information has been obtained in the form of geological and mineralogical evidence in the images returned by the orbiter cameras and also through direct sampling of the rocks and soil by the surface Rovers. It would appear that at some period in the distant past, significant areas of the Martian surface were covered by a shallow, salty sea where life may even once have evolved.

Close up photos of Mars were recently taken by the ESA Rosetta spacecraft on its way to comet 67P/Churyumov-Gerasimenko. Launched in 2004, Rosetta’s journey will take ten years to reach its target. On arrival it will land a small probe on the surface of the comet (becoming the first spacecraft to attempt this) and then spend many months following and studying the comet’s nucleus. Comets are thought to be the primitive building blocks of the solar system. By studying them, it should aid our understanding of how life on Earth got started and whether some molecules arrived on comets as part of this process. Rosetta is one of the most challenging missions ever attempted. A lot of the processes involved in the navigation and landing by the probe on the tiny comet will need to take place automatically due to time delays in communicating across the millions of kilometers of space. There will thus be no room for error.

NASA’s Cassini has been remarkably successful in its tour of Saturn and its family of satellites. Now three years into its mission, Cassini has returned enormous amounts of data. It is the first spacecraft to orbit the Saturnian system enabling detailed study not just of the planet but of its rings and its numerous satellites too. An enormous hurricane, similar to those occurring on Earth, has been discovered at Saturn’s south-pole. Titan, Saturn’s largest satellite is gradually giving up its secrets to Cassini’s radar. Although the European Huygens Probe which piggy-backed on the Cassini craft didn’t show the long suspected lakes of liquid hydrocarbons, Cassini is now finding evidence for their existence in the polar regions of Titan. This is the only other body in the solar system where liquid lakes have so far been discovered apart from the Earth. In addition, there appear to be tall mountains covered in material which may be an exotic form of organic “snow”. Enceladus, another of Saturn’s moons, has been found to have enormous geysers of water ice shooting out of the ground near its south pole. This moon can now be added to the small but growing list of bodies in the solar system where water has been discovered.

NASA’s New Horizons mission is on its way to the now relegated former planet Pluto and the Kuiper Belt – the first spacecraft to investigate such distant planetary bodies. It will study these icy objects that lie at the far reaches of our solar system and try to determine how they fit into current models of how the solar system may have formed billions of years ago. 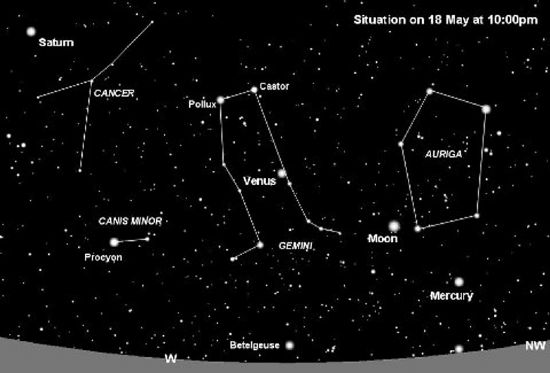 All the planets mentioned can be seen in the night sky this month. Mars is visible in the morning sky in the constellation of Pisces. Saturn can still be seen ahead of the curve of the backward question mark that forms the constellation of Leo. Venus still shines brightly in the evening twilight and is joined by Mercury in mid May, but the best photo opportunity occurs at the end of the month when these two planets are joined by the Moon.

All in all, we are living through very exciting times as the human race continues along the exciting road of exploration in our solar system.