August is the start of the new astronomy season, as by now there is at least a limited amount of true darkness at night.

Throughout the hours of this darkness, the sky is dominated by three brilliant stars, which make a very obvious large Triangle to the south. Consisting of Vega in Lyra (The Harp), Deneb in Cygnus (The Swan) and Altair in Aquila (The Eagle), the ‘Summer Triangle’ is not an official pattern or constellation but an asterism first brought to the general public’s attention by Patrick Moore in his Sky At Night programme in the 1950s. The triangle is quite obvious, as Vega, Altair and Deneb are the 5th, 12th and 19th brightest stars in the sky respectively. Despite their appearance, Vega and Altair are ordinary main sequence stars of no particular significance, whereas the dimmest of the trio, Deneb, is an immensely remote and powerful supergiant. 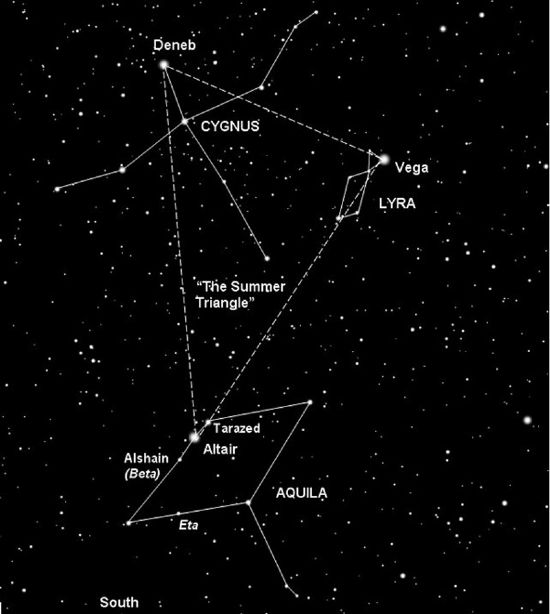 Vega is decidedly bluish in colour. According to an old Chinese legend, Vega was a weaving girl and Altair a shepherd boy. As with all legends, they were in love. So engrossed were they with each other, they neglected their duties and were punished by being placed on opposite sides of the Milky Way.

Vega is 25 light years away, and 52 times more luminous than the sun. When examined by IRAS (the Infrared Astronomical Satellite) it was found to have a huge infrared excess, implying that it was surrounded by a cloud of cool particles. Recently, irregularities found in this disk may suggest the possibility of the presence of a planet.

Altair is less than 17 light years away, so is one of our nearest neighbours and is only 10 times as powerful as the sun. It has been found to spin very quickly, with a rotation period of no more than 9 hours, making its disk more oblate than round.

Deneb, however, is a massive object. At least 3000 light years away, it is about 260,000 times as luminous as the sun, its diameter probably greater than that of Earth's orbit! If it were as close to us as Altair it would look brighter than the full moon. It is one of the most and luminous of all first magnitude stars, with an absolute magnitude of –8.73.

This month the constellation of Aquila, the Eagle, is very obvious. Altair, the brightest star in the constellation, is flanked by 2 stars; the reddish Gamma Aquilae (or Tarazed) above, and Beta Aquilae (or Alshain) below. Beneath Alshain is a line of 3 stars, the middle one of which is Eta Aquilae, a variable star, ranging from magnitude 3.3 to 4.4 in a period of 7.2 days. This type of star is called a Cepheid variable, after the first to be discovered in this class, delta Cephei. These stars are fairly large, at 3 to 9 times the mass of our sun, their variability being caused by oscillations on their surface. Their pulsation periods range from 1 to 60 days. This class of variable is very important, as it was discovered in 1912 by Henrietta Leavitt that they show a period and luminosity relationship. She noticed Cepheids at a similar distance, with similar luminosities, had similar periods of oscillation. Hence these types of stars are ‘standard candles’ - objects whose true brightness can be calculated and are therefore of great use in trying to estimate the size of the Universe. Eta Aquilae’s variability can be easily seen with the Naked Eye. Why not have a look at Eta and see if it is nearer Beta (magnitude 3.7) in brightness or more similar to the dimmer Iota (magnitude 4. 4).

Venus is very bright, but very low down to the West, but is really too close to the Sun to observe. She shoots round the back of the sun to arrive low in the east before sunrise at the end of August, at which point she will display a very fine crescent in any size of telescope. Jupiter is also very bright, low down in Scorpio near that constellation’s brightest star, Antares. Mars can be seen if you are up late, between Aldebaren and the Pleiades at the beginning of the month, but alongside the red Aldebaren by the end. Unfortunately, this will all take place very low in the sky, but if you are favoured with a low northeastern horizon you may be lucky enough to detect this pair of celestial rubies. Although almost the same colour as the star, Mars is twice as bright.

If you are looking for a slightly more relaxing observing project, the Perseid meteor shower is at its maximum on the night of August 12/13. For once, conditions are perfect, as there is a new moon. Meteors from the shower can be visible from July 23 to August 20. The radiant, or point at which the meteors appear to emanate, is slightly above the constellation itself, and if predictions for this year’s shower are correct, we may expect to see up to 80 meteors per hour. No equipment is necessary to observe them, only warm clothing and a comfortable deckchair! Good luck and clear skies!