More Than Maria And Mountains

In the early evening of Wednesday 26th September, if you can find a spot with a low eastern horizon you are in for a treat. This is the night of Full Moon in September, and sees the Moon in the constellation of Pisces, The Fish. As we are snuggled firmly in the midst of good Highland farm country you will probably already know the Full Moon in September is known as the ‘Harvest Moon’. It will appear to be very large and bright, and hang very low over the horizon for a while, before climbing slowly to its highest elevation in the early hours of the 27th, round about 2am. Now, apart from the sheer majesty of the lunar globe suspended big and obvious above the horizon and tinted a strong orange colour due to the effects of atmospheric refraction, the main feature that you will see on the moon will be the dichotomy of the lunar ‘seas’ or maria (pronounced mahr'-ee-ah), and the mountain regions.

No optical aid is required to pick out the contrast between the low, flat-looking maria and the jagged, rugged looking mountain regions, and binoculars will highlight the differences further. The maria are thought to be large impact craters that have flooded with molten lava, leaving them with a smooth appearance to us, observers at a mean distance of around a quarter of a million miles. Up close, as seen through a four-inch telescope perhaps, or from the window of the Apollo landing modules in the nineteen-seventies, they are actually pitted with smaller craters and littered with debris thrown up by those meteoric impacts from eons ago.

The mountain regions are impressive in binoculars too, and when the Moon is not full (i.e., when it is waxing or waning) the lunar terminator (or the line that separates the sunlit portion from the dark) will throw up bright sunlit peaks that cast gigantic shadows over the surrounding terrain. For contrast and detail, the best time to observe the Moon is when it is approaching full or waning past full.

The sight of the September Moon may well inspire many people to purchase telescopes each year, and equipped with such an instrument, say a 4-inch refractor, there are many more lunar features than just maria and mountains to keep an eye open for. A basic Moon Map can be bought from many bookshops now for a few pounds, and will show all of the different types of features and their locations on the face of the Moon. Such a map is a great accessory for a new telescope owner, and will help them to really explore the Moon’s surface. 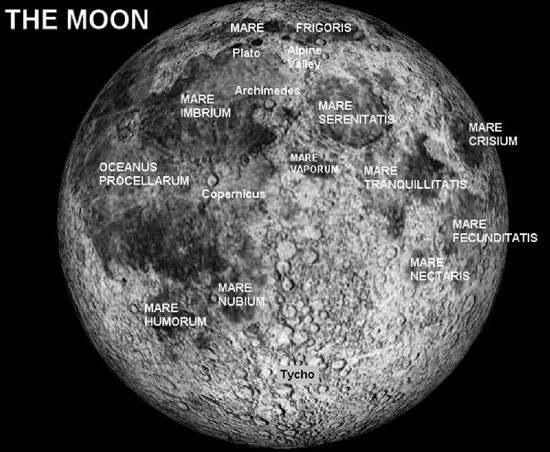 In my opinion, one of the first features to keep an eye open for is a very obvious stark looking crater in the high northern hemisphere, slightly to the left of an imaginary line bisecting the Moon’s visible face. It is situated in the middle of a long continuous mountainous region that runs east to west, and the crater floor is very smooth and dark, making it stand out very well against the more lightly coloured mountain background. To the north of these mountains is Mare Frigoris, the ‘Sea Of Cold’, and to the south Mare Imbrium, the ‘Sea Of Rains’. It is the contrast of this 100km diameter crater against its environs that makes it such a stunning sight in a telescope, though it has even more to reveal! In the crater’s floor are several more very small ‘craterlets’, which are quite hard to see. However, when the Moon is high and away from the turbulent air near the horizon it is possible to view these tiny craterlets through small telescopes; it is still a challenge, but one well worth taking on!

Near to crater Plato is a different type of geological feature: the Alpine Valley, or ‘Vallis Alpes’. It is a long, narrow chasm sited to the right of Plato (as we see the Moon with unaided eyes) and separated from it by about two Plato diameters. In the space between the two are the Lunar Alps, a range of mountains whose highest peak is that of Mons Blanc at 3.6km. The Alpine Valley runs northeast to southwest across the lower part of this range, and is about 180km long and 10km wide at its widest point. In the floor of the valley is a much narrower rille, which is thought to be an area between two parallel fault lines that has dropped below the surrounding surface.

These features are only two of the many thousands that can be observed whenever the Moon is in the sky and the clouds are at bay - and they are both contained in only one tiny portion of the Moon’s Earth-facing disc! A Moon Map and a small telescope can really open your eyes to the possibility of exploring our closest celestial neighbour for yourself in the coming months, as it starts to climb higher in the winter skies again - and all from the comfort of your own back garden.