October is the best time to glimpse one of the greatest wonders and mysteries in the sky. It is the time that mighty Hercules appears in the west in the evening. It is easy to find, all you need to do is find a large triangle of stars in south western sky known as the “Summer Triangle”, and follow the smallest edge between Deneb and Vega down and to the right until you find four stars that form an obvious keystone shape that is slightly tilted to the right. This is the “body” of Hercules, and the scene of this month’s astronomical object of choice. 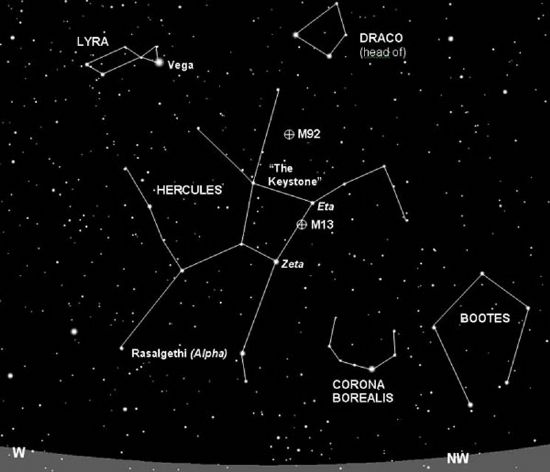 Although visible with the naked eye, a pair of binoculars may be used to find this object easily. Imagine a line from Eta Herculis (top right hand corner of the keystone) to Zeta Herculis (bottom right corner of the keystone). Right on that line, about one third down from Eta to Zeta you will notice a small hazy patch of light, especially when using averted sight. Averted sight is a technique which involves looking slightly away from the object, and thus using a more sensitive part of the eye. In binoculars it is clearly seen, somewhat star like, but with an obvious “out of focus” feel to it. That is because you are not looking at a single star at all, but millions of them. You’re looking at M13, one of our galaxy’s majestic globular clusters. M13 is the finest object of this type in the northern half of the sky.

It was originally discovered in 1714, and first described by Halley, famous for the discovery of the long period comet. Fifty years later, Charles Messier, another great comet hunter, put it in his catalogue of fuzzy objects. He described it as a “round nebula containing no stars”. How wrong could he be!

William Hershel was the first to use one of his big reflectors to resolve the cluster into stars. Nowadays, even a modest amateur telescope will be able to reveal the true beauty of this object. Especially a bigger scope, with say 200mm aperture or more or indeed a good quality refractor will show hundreds of stars like glittering dust.

There are so many stars in M13 and they are so densely packed that it is impossible to resolve them near the centre of this cluster, as if the stars are so closely packed that they touch each other. This is an illusion though, because if we would make a 300 mile diameter scale model of this cluster, the stars could be represented by grains of sand, each three miles apart! Nonetheless, it would be a magnificent sight if our sun would have been part of such a cluster. Our sky would be full of blazing stars, each dwarfing Sirius and Vega into insignificance. There wouldn’t really be a night to speak of, and most likely, we wouldn’t have any idea of what would be “outside” our cluster, as the view would be completely obscured by the brilliance of all the stars.

We have discovered about 150 of these clusters in our galaxy, each containing from tens of thousands up to perhaps more than a million stars like in M13. So what are these objects? Their origins and role in the galactic evolution are still unclear, but their density can be explained by their mass. I.e. there are enough stars in a globular cluster to keep its shape by means of gravitational force, i.e. the stars don’t slowly drift apart like they do in open star clusters such as the Pleiades.

We know there are similar clusters in other galaxies, but numbers vary wildly. Some spiral galaxies may have tens of thousands of globular clusters, others hardly any. The distribution of globular clusters is also odd. Imagine our galaxy as a flattened disk of stars, with a slightly denser bulge in the middle. Surprisingly, the globular clusters neither appear in this disk nor the bulge, but in a sphere surrounding the entire galaxy. And most amazingly, when doing spectroscopic analysis on the stars in these clusters, we find that they are extremely old, often more than 10 billion years, which is now believed to be quite a large proportion of the age of the entire universe, and as old as our galaxy itself.

From this knowledge it is quite possible to suggest that globular clusters are likely the by-product of the actual formation of our galaxy. How they were formed is still a mystery, but that does not take away from the awe inspiring beauty of these.

A second globular cluster, M92, can be found in Hercules not so far from M13. It is about half way between Pi and Iota Herculis, and slightly to the right. This object is not visible with the naked eye, but detectable in good binoculars and modest amateur scopes.

The Society are providing a major input into the Highland Science Festival which will take place in the first two weeks of November. Full details are to be announced shortly in the media and on the Society website, and also on the new Festival's website, which will be at www.highlandsciencefestival.com.