The Clouds Of Orion

During the cold dark nights of December the southern sky is home to one of the largest and most recognisable constellations in the night sky: Orion. The hourglass-shaped asterism that marks out the Hunter’s body contains stars that are all brighter than third magnitude and stand out very well against a dark sky background.

Famous for the Great Orion Nebula (Messier 42) situated in the part of the constellation known as “Orion’s Sword”, Orion is home to many other visual wonders (many of which are easily seen with a small telescope) including emission nebulae, reflection nebulae, dark nebulae, open clusters and binary star systems.

The Great Orion Nebula is only the most easily visible portion of the huge cloud of interstellar gas and dust that encompasses much of the constellation. The Great Orion Cloud, as it is known, is about 1500 light-years away from us and spans several hundred light-years. It is the interaction between parts of the cloud and stars near or within it that provide us with such beautiful deep sky objects to observe as astronomers.

It is fortuitous that such a visually rewarding constellation should appear at its best in the winter months, around the time that many potential new stargazers may find themselves in possession of brand new telescopes near the end of the month! Faced with the question, “What should I look at first?” a very good answer would be, “Orion!”

So where to start?

The trio of stars that make up Orion’s Belt are easy to find, and using moderate magnification on the star furthest to the right (Mintaka) will show its multiple nature. Although to the unaided eye the ‘star’ appears simply as a single point of light, in fact it has an easily detected companion star that orbits at a distance of about a quarter of a light-year. There is also a much fainter 14th magnitude companion between those two, and the brightest component star is in itself double, though this companion is much too close to be detected visually. 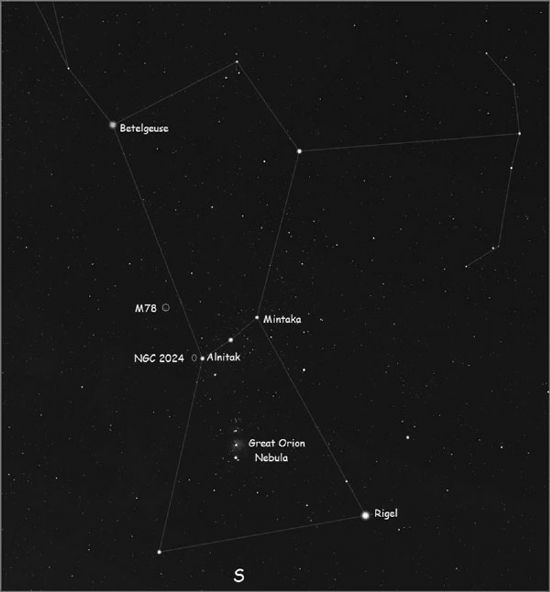 Moving the telescope to the star at the other end of the belt, Alnitak, puts you in position to see an emission nebula. This particular one is known as NGC 2024, or more romantically, the Flame Nebula. It is right beside Alnitak, so it is necessary to position the star just outside the field of view of the telescope so that its glare doesn’t overwhelm the view of the nebula. Skies permitting, you should see a faint u-shaped patch of nebulosity that will appear like wreaths of smoke against the sky. The ‘Flame’ shows its real beauty in long-exposure photographs, but if you do manage to see it visually relish the view – you’ve made a good start!

An emission nebula is basically a glowing cloud of interstellar gas. Radiation from nearby stars ionises the hydrogen-rich gas, stripping it of its electrons. The loose electrons gain energy from the ultraviolet radiation emitted from the nearby stars, and when they recombine with other atoms some of that energy is released in the visual wavelengths: light. So emission nebulae are glowing from within, powered by the stars at their hearts.

Reflection nebulae are slightly different. In these, the dust within the nebula is reflecting the light of nearby stars and scattering it, causing the nebulous material to glow. A terrestrial analogy would be, for example, watching the headlights of a car approaching in thick fog. A good example of a reflection nebula is Messier 78, situated about 2.5 degrees (a distance of about five full moon widths) to the north of Alnitak and slightly to the east (that is, to the left as we see it). Once found, it appears as a small fan-like smudge of ethereal light, with two 10th magnitude stars peering out through the gloom. The nebula is lit up not only by the light of these two stars, but by others associated with that part of the cloud as well.

Of course no night of observing Orion would be complete without treating yourself to a view of M42, the Great Orion Nebula itself. It is a place where the processes of star-creation have recently (in astronomical terms) taken place and are still occurring. The vast area of the nebula is alight with the glow from the hot, massive young stars that are newly formed, making it one of the most easily seen emission nebulae of the northern hemisphere. The haze is just about detectable by the unaided eye, but through a telescope the view is astounding. At the heart of the nebula can be seen the small group of stars that are ionising the cloud. Four can be seen easily in a small telescope, though there are more to be seen if larger apertures are used or the sky is particularly stable. Glowing fans of nebulosity spread out from this group of stars, known as the Trapezium, and arc back towards each other. Within the cloud can be seen variations in the density of the nebulosity and subtle shading – it is an unforgettable sight.

These are only some of the wonders contained within the borders of Orion, but they are some of the best examples of their types in the sky. What could be better – a dark December night, a new telescope to try out, and the full splendour of mighty Orion looming overhead in the Highland sky? Wrap up warm and enjoy the experience.