Have you been enjoying the night skies over the last few months? Explored the fantastic constellations of Orion, Leo and Auriga? Maybe you’re just starting out on the path of the astronomer and are learning your way around the constellations? Have you ever wondered why Orion is called Orion? Or Leo, Leo? Why do the constellations have the shapes they do, and why are they so named?

Humankind has been looking up into the sky for a very long time. Ancient Greece would be a good place to start looking for the answers, and one of the very first works that listed constellations and their names was a poem written there in around the eighth century BC. It showed that the constellations were based on mythological characters – larger than life figures – including heroic warriors, their lovers, and the monsters they fought. Even the tools they used could be placed in the heavens near them, represented by stars that outlined their approximate shapes, of course!

What is interesting is that several of the constellations that we know today were observed by many different cultures thousands of years ago, and yet were represented visually in almost identical ways. For example, Greek mythology has Orion as a gigantic hunter who challenged the gods, saying that there was nothing on Earth that he could not slay. Most people who have any interest in the sky at all will know the shape of Orion’s constellation: stars marking his feet, shoulders, belt, sword, upraised shield and club. But Orion (the constellation) was also known in ancient Egypt as Osiris, the god of life, death and fertility. The constellation looks like – well, it looks exactly like the figure of Orion from Greek mythology!

Orion also pops up in Babylonian, Aboriginal, Mexican and Chinese astronomical references, and is even mentioned in the Bible three times! So although the different cultures had different identities for the character represented by the constellation, the common image was nearly the same: a man/hunter/hero standing poised, ready for action in the night sky.

A ‘constellation’ as we know it today is a pattern of stars in the night sky that represents some object, person or creature. There are eighty-eight currently recognised, and they were officially delineated and charted by the International Astronomical Union in 1928, so that astronomers across the whole world would have common reference points. Although many of these constellations were drawn from the ancient cultures of Greece, Babylon, China and more besides, others had been created in the 17th and 18th centuries to give celestial representations of the tools of science. Examples would be Telescopium (the telescope), Reticulum (the reticle) and Horologium (the clock). Fourteen of these ‘modern’ constellations were created and named by French astronomer Nicolas Louis de Lacaille in his posthumous work, ‘Coelum Australe Stelliferum’ published in 1763. They filled in some of the empty spaces between the larger ‘classical’ constellations of the southern skies.

Now although a constellation may represent a character or creature, the most recognisable part of that constellation may not be the whole of it. For example, the constellation of Ursa Major, the great bear, which never sets for us in the high northern latitudes, covers a vast area of sky. The chances are, if asked on a dark night to point out the ‘Great Bear’, you would point upwards and trace the familiar ‘plough’ shape with your finger. But the plough is only a part of the full constellation. The bear actually covers an even larger area!
The part that is most instantly recognisable to the casual observer as ‘the plough’ is what we call an asterism: a recognisable pattern of stars. Another good example would be Orion’s belt or his sword. The Summer Triangle, which actually comprises stars from three different neighbouring constellations: Altair from Aquilla, Deneb from Cygnus and Vega from Lyra. The Great Square of Pegasus is a large asterism that resides within one single constellation, Pegasus, the winged horse, and another is The Sickle: a mirror-reversed question-mark that marks the fore-quarters of Leo, the great lion, mentioned in last month’s Seeing Stars article. 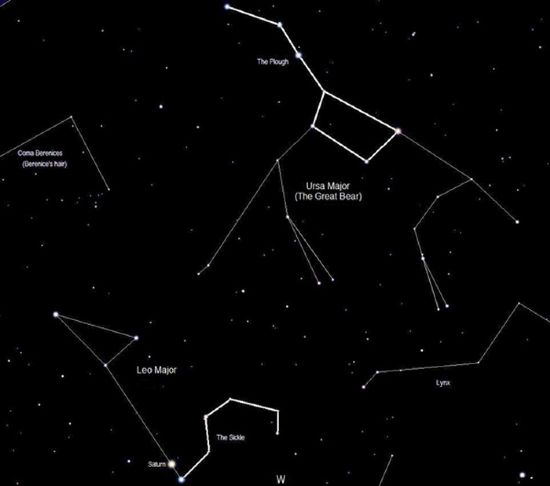 Although the night skies are not as dark in May as in the winter months, it can be a good time to actually learn the constellations. They are usually marked out by the brightest of the stars that can be seen, and even though fainter stars may not be visible against the not-quite-black sky background, these bright markers should still be obvious enough for you to trace the patterns in the sky. A simple book of the constellations is all that is required, and, if you are lucky, a quiet spot away from streetlights. The Collins Gem Guide to the Stars is ideal, as it focuses on one constellation at a time, and is a small book that will fit into your pocket for convenience. Once you start hunting down the constellation patters, you will soon start to recognise them as familiar friends in the sky and perhaps soon be able to trace your way across the entire sky, ticking off the constellations as you go. With the constellations identified and familiar, you should find it easier to find the notable asterisms, like Orion’s Belt and The Sickle that I mentioned earlier.

While enjoying these exercises in the nights of May, you will be repeating a course of actions carried out for millennia, as stargazers have always had to learn the constellations and identify the shapes that they are deemed to represent. At such times it can be easy to lose track of time and imagine oneself back in a long ago age when the constellations were really believed to represent gods, heroes and monsters – or perhaps slightly more recently telescopes, reticles and clocks!