Most of the space missions currently active are satellites investigating various aspects of our world; only a few are exploring the other planets.

Messenger, which stands for MErcury Surface, Space Environment, GEochemistry and Ranging was launched by NASA in 2004. It made the first close flyby of Mercury in more than 30 years in January of this year and imaged parts of the surface never seen before. When Pioneer 10 flew past in 1975 it was only able to photograph 45% of Mercury’s surface so much of the planet remained a mystery.

The new photographs tell an interesting story. Mercury is heavily cratered like our Moon but some of these craters have strange markings within them. One in particular is called ‘The Spider’ because of more than 100 narrow flat floored channels extending outwards from a multifaceted central region. Nothing like this has been found on Mercury before and nor does anything like it exist on the Moon.

In addition there are areas on the surface which show signs of volcanism in a style never seen before and winding their way across the surface are many tall cliffs. The cliffs were seen originally on photographs taken by Pioneer 10 but it seems that they also extend onto the side of Mercury being currently investigated.

Messenger is due to return for another close flyby in October this year and again in September 2009 before the spacecraft goes into orbit around the planet in 2011. Complete maps of Mercury’s surface will eventually be produced.

Venus Express was launched by ESA in 2005, the first spacecraft to explore Venus for nearly 30 years. Its objectives are to investigate the atmosphere: its composition, chemistry, circulation, amount of water present and the greenhouse effect; and whether volcanoes are still active.

Already, our understanding of the atmosphere has increased – an accurate temperature map has been recorded, a strange polar circulation cell has been discovered, lightning has been found to affect the atmospheric composition and the solar wind has been watched as it strips the atmosphere from the planet.

Perhaps most interesting is the search for volcanic activity. Venus Express has confirmed rapidly varying amounts of sulphur dioxide in the upper atmosphere. Some scientists believe this is due to recent eruptions, others that volcanoes may have been active ten million years ago and the gas is still reacting with the surface rocks. So the hunt is on to find a plume of gas, a thermal image of activity on the surface or a fresh lava flow.

Phoenix Mars Lander reached the surface of the red planet just after midnight on Monday 26th May this year. Only five of eleven previous attempts to land on Mars have succeeded. The spacecraft landed in the northern polar regions where there are vast stores of water ice below ground (originally found by Mars Odyssey and confirmed by Mars Express). It appears to be working properly and has started taking photographs of the surface which show a deficiency of rocks and also the polygon features that had been seen from space. Polygons are the strange shapes caused when the ice contracts and then fractures, and they can also be seen in the arctic and Antarctic regions on Earth.

Phoenix has a robotic arm which will dig beneath the surface to the water ice below. Ice and soil will then be scientifically analysed to see whether there are any chemical markers to indicate whether life could have occurred on Mars. Life can exist in extreme conditions and it’s possible that dormant microbes could survive in the martian ice perhaps becoming active if the ice melts which is thought to happen periodically. The lander will also investigate the history of water in the polar regions to assess times when liquid water may have flowed on the surface, possibly as recently as 100,000 years ago. 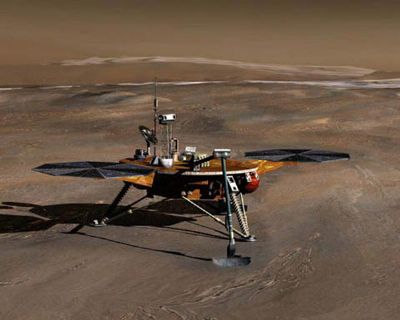 Mars Reconnaissance Orbiter took pictures of Phoenix as it parachuted to the surface – the first time a spacecraft has taken a photograph of another as it makes planetfall. The camera in this orbiter is so powerful it is able to resolve the Mars rovers on the surface and has managed to capture many detailed pictures of the landscapes on Mars and even an avalanche in action.

The high-resolution camera on Mars Express has produced exquisite 3D colour pictures of the surface, from enormous volcanoes to craters carved by ice. The volcanoes of the Tharsis bulge can be seen to be very young and may have been active only a few million years ago.
Unusual fan shaped geological formations with steps may well have been carved from colossal amounts of water gushing from under ground over a relatively short period of time, i.e. tens of years instead of hundreds or thousands of years.

Still busily roaming the surface of Mars are Spirit and Opportunity. They have operated for 16 times longer than expected and are now into their fourth year. Both have found evidence for warmer wetter conditions, confirmed by the salt deposits, hydrated minerals and clays discovered by Mars Odyssey and Mars Express. However, the presence of sulphates and iron oxides suggest that over time Mars probably became colder and drier.

Very recent analysis of the martian rock by the Rovers suggests that the water on Mars was probably too salty to support life. Does this also apply to the polar regions where Phoenix is about to sample the ice? We should find out soon.

Space missions by unmanned craft enable us to investigate our near neighbours to try to answer the many questions posed about them. They are also invaluable in exploring the more distance planets and the article next time will focus on what’s new beyond the orbit of Mars.