Last month we looked at the latest findings by spacecraft visiting the inner planets.

In the outer solar system, Cassini is continuing to orbit Saturn. Its four year mission to explore this giant gas planet, with its magnificent rings and bizarre moons is up this month but fortunately has been extended by another two years.

Cassini has discovered many weird and wonderful things. A small moon called Enceladus is geologically active; fissures in its southern hemisphere are warmer than the rest of the moon and it is from here that water vapour shoots upwards, the resulting ice particles producing Saturn’s E-ring. They also add mass to Saturn’s magnetosphere, slowing down the rotation of Saturn’s magnetic field.

Titan is gradually being revealed thanks to Cassini’s radar, which maps slices of this mysterious moon every time it passes close by. Its surface appears to be a land dotted with methane and ethane lakes filled by methane rain that can fall in torrents producing river systems like those on Earth. There are also many shifting sand dunes blown by strong winds across the surface of Titan. These are made from ice grains or tiny solid particles of hydrocarbons that either fall from the sky or are eroded from the hills during rainstorms.

This smog-enshrouded moon may have an internal ocean of liquid water mixed with ammonia just beneath its crust enabling its surface to slide sideways, thus explaining the unexpected movement of Titan’s features.

Iapetus is a strange two-toned moon; one half dark the other light. As this moon orbits Saturn, its leading edge becomes blanketed with dark material that may have been flung off Phoebe during an impact in the past. What is astonishing is a ridge ringing the equator with mountains higher than Mount Everest in places. It is thought that when Iapetus was very young its spin rate was much faster, causing its midriff to bulge. Later it cooled rapidly and become frozen into the walnut shape we see today while its rotation gradually slowed. 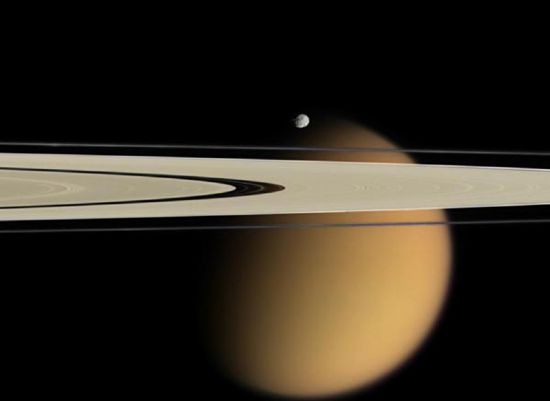 Rhea is Saturn’s second largest moon and is about 1500km in diameter. Instruments aboard Cassini have detected a broad disc of debris extending outwards by several thousand kilometres and at least one ring around Rhea. This material is thought to range from the size of pebbles to boulders. No other moon is known to have a ring system.

Saturn has high temperature hurricanes swirling around the north and south poles and many of its atmospheric storms are long lived. Evidence now suggests that the rings may be a permanent feature of Saturn whereas it has always been thought that they were temporary, having been created by moons or other debris straying too close to Saturn’s gravitational field and breaking up as a consequence.

Interaction between the ring particles and the little moonlets that live amongst them produce waves and wakes creating quite beautiful patterns in the rings. The complexity of the F-ring in particular is astounding. It appears to be braided with delicate ringlets winding around the central strand creating a close spiral, and dotted along its length are little knots and clumps.

Scientists haven’t finished with Saturn yet. For every question answered from Cassini’s primary assignment, ten more have been raised. The extended mission, known as the Cassini Equinox mission, hopes to be able to provide the solutions.

Meanwhile, New Horizons is still plodding along at 40,850 mph on course to reach Pluto in 2015. It spends most of its time asleep only to be woken occasionally to check out its instrumentation. A couple of months ago it crossed Saturn’s orbit although the ringed planet was not in sight. On 3rd June this year, the spacecraft was one quarter of the way through its nine and a half year journey to the outer solar system.

The Voyagers are the only spacecraft still operating beyond Cassini. They explored the outer solar system in the 1970’s and 1980’s sending back our first close views of the giant planets and their moons, and providing a gargantuan wealth of information. Their missions were extended to determine the whereabouts of the termination shock at the far reaches of our solar system. Here the fast flowing solar wind slows abruptly from an average speed of 900,000 mph to less than 225,000 mph making for a bumpy ride. Voyager 1 crossed it just once but Voyager 2 passed through it multiple times during a particularly gusty time. They found that the location of the termination shock was much further out from the Sun than expected and have confirmed that the planets all reside inside a gigantic bubble of gas. Beyond the termination shock is the very edge of our solar system where the solar wind abuts the thin gas of interstellar space. This is the limit of our Sun’s influence.

The solar system is an incredible and astonishing region of space. The many spacecraft exploring its various aspects encounter magical places of mystery and beauty, sometimes making discoveries that take your breath away.

Space missions give us a glimpse of extraordinary worlds beyond our own blue planet, keeping us in touch with the wider picture.