Meteor showers can be really impressive things. Think of them as Nature’s own fireworks displays and you won’t be far wrong. If you’ve never seen a really good one, then you might just be in luck this year…

I used to wonder why meteor showers always took place at about the same time every year. It took astronomers until 1862 to be absolutely sure as to the explanation of this, and the answer paints a much bigger picture than one of just meteors and the Earth.

When you see a meteor flashing across the night sky, you must be aware that what you are seeing is probably a very small piece of dust or cosmic debris skimming through the Earth’s upper atmosphere and vaporising due to the friction produced. The vaporisation leaves a streak of light imprinted briefly on the night sky, and gives the impression of a super-fast firework going off at high altitude. The size of the object in question may be anything from dust-mote size to a centimetre or more across.

Most dark nights you will see a few of these flashing quickly across the sky, known as ‘sporadic meteors’, but when we see a meteor shower there are many more, all going off at the same time, sometimes all across the sky.

Why so many? Where do they come from? How do we know when they will come?

To answer these questions we have to refer to another astronomical phenomenon: comets. Comets are giant ‘dirty snowballs’ that orbit the Sun. Their orbits can be very eccentric, taking them out to the Oort Cloud right at the very extreme edge of the Solar System. Others have smaller orbits that carry them only as far as the Kuiper Belt, just beyond Neptune’s orbit. But they all, eventually, come in to pass by the Sun. When they do this, the Sun’s radiation causes the water ice, frozen gases and other materials within the comet’s core to vaporise and stream out, away from the Sun, carrying dust and small pieces of debris. This produces a tail, and it is when this happens that comets become interesting objects for backyard astronomers to observe.

But those small pieces of dust and debris have to go somewhere, and they tend to form a stream of meteoroids (a potential meteor) which spreads out along the path of the comet’s orbit around the Sun. Now, the Earth also orbits the Sun, so can you guess what happens to those small pieces of debris when the Earth passes through the meteoroid stream? Yes, those cometary fragments and bits of interplanetary flotsam and jetsam are the very same bits and pieces that skim across the Earth’s atmosphere, producing ‘shooting stars’ – or Nature’s own fireworks!

The promising shower for this year that I alluded to earlier is associated with comet 109P/Swift-Tuttle and it is known as the Perseid meteor shower. The different showers are named after the point in the sky from which they appear to emanate when the shower is at its most active. The Leonids seem to come from a point in the constellation of Leo; the Orionids from somewhere within Orion’s boundaries, and so it is with the Perseids. The point where they seem to stream from is known as the Radiant. It is an effect of perspective really, as the Earth is rotating all the time, and also moving in orbit around the Sun. Although the meteors seem to be the moving objects, technically the Earth and its protective cocoon (the atmosphere) are also moving, very rapidly, across the stream of tiny particles in space. 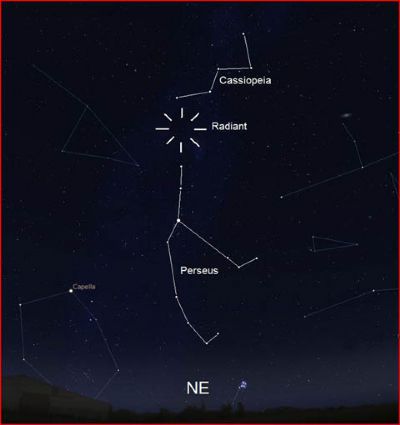 The Perseids are due to be at their very best on the night of 11th/12th August. The waxing Moon sets at around 11.30pm so after that would be the best time to start watching. Moonlight can swamp the more faint meteors, so it is handy that at the predicted peak period this year the Moon will be below the horizon. If you can stay up until the early morning (say 4am) you should be treated to a brilliant display. If you want to observe them scientifically and keep a count of the numbers, directions of travel, etc, you can get information on how to do this from the meteor section of the British Astronomical Association (www.britastro.org/baa). However, it is just as much fun to simply wrap up warm with a blanket and a deckchair facing the radiant, keeping a flask of something warming and tasty nearby. Assuming the predictions are accurate and the weather co-operative you can spend a couple of hours revelling in the fireworks above, each produced by a tiny fragment of space-dust that has travelled all over the solar system to a sky near you.

Also in this part of the cosmic neighbourhood, Today (1st August) there is a partial solar eclipse. It will be total on a narrow band stretching over the arctic and then across Russia, part of Mongolia and finishing in China. From the north of Scotland, we will be treated to the sight of a ‘bite’ roughly the size of a quarter of the Sun being taken out of the disc by the Moon.

The eclipse takes place in the morning, starting around 9.25am will be at its maximum about 10.15am and will end around 11.10am. We probably won’t notice a great deal of difference to the light, but if you get a chance to view the eclipse you will notice the bite gradually increase in size, before the Moon and Sun separate again, filling in the missing section of the Sun’s disc. Our new observatory at Culloden Battlefield will be open for this event from 9am onwards.

DO NOT LOOK DIRECTLY AT THE SUN OR YOU WILL PERMANENTLY DAMAGE YOUR EYESIGHT. The safest way to view the eclipse is to see it at our observatory where the Sun can be viewed through specially designed solar filters, or you can project the image onto card through a pinhole.

So this month we’ve got interplanetary dust fragments burning up in the atmosphere and the Moon taking a chunk out of the Sun. Astronomy can be very dynamic sometimes.