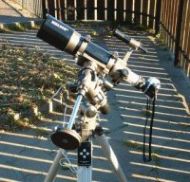 For quite a while I had been looking for a scope that would fulfil a number of requirements. I wanted a second scope which was small enough to take on holiday, which would also double as a spotting scope (not the other way around), and which I could utilise for astrophotography (for prime focus widefield deep space photography, or as a guide scope). I had looked at a number of options and the ETX90 had been at the top of my wish list. However, what eventually changed my mind is that the ETX has a very long focal ratio, making it less suitable for prime focus photography.

Because we had recently bought a house, my budget wasnot too big, so I decided to look around to see what was out there second hand. I came across quite a few Startravel scopes and decided to try my luck. This didn't work out very well, as all scopes had already been sold. However, one nice chap kept sending me e-mails telling me where I could find more second hand Startravel scopes andI finally found one in an on-line shop, somewhere in Birmingham. I decided not to take a chance of losing it and I ordered it straight away for £175 complete (£275 new, so I saved £100).

The scope duly arrived within days and in its original box. A few lens caps and one wing nut were missing, but otherwise the set was complete and in excellent condition. Heliossells a range of these ultra portable wide field refractors; the smallest is 80mm, then there is the 102mm, a 120mm and even a 150mm. They are all f/5. They are also sold under other brand names but supplied accessories may differ. The Helios Startravel 102 comes with an EQ1 mount, star diagonal, 10mm and 25mm plossls and a short 2x Barlow. The 120 is supplied on an EQ2 and the 150 on an EQ4. The 80 is supplied with Kelner eyepieces, and is available without mount and with a 45 degree erecting prism for spotting use. New prices range from £175 for the 80 to £600 for the 150. (2002 prices)

Setting Up and First Impresssions

As with the Apollo, the first impression is that of a chunky scope with little plastic. However, after setting it up (which is not difficult by the way), my feeling is that the EQ1 is a trifle too light (and plasticky) and I would rather have seen it supplied with the EQ2 instead. It works, however, and the EQ1 is very light, making it more portable, I suppose. Disassembled, the scope is really compact and fits in an old bagpipe case which I happened to have spare. This way it hardly takes any space in the back of the car, so it is well suited for my purpose.

Setting up is a doddle and very fast indeed. I did make a few changes though (as usual!). I changed the tube ring bolts for longer ones and stuck them in the other way around, using wing nuts to fit them to the mount. That way you can assemble the entire scope in minutes and you don't need to take any tools. I also replaced the accesory tray with some chain. This allows me to set up the the tripod in seconds, rather than minutes. Because it is a refractor, the scope doesn't need a lot of cooling down time, so you can be up and running in no time. Ideal for a ‘quicky’ observing session.

The scope has an impressive 2" focusser, which allows for smooth adjustment. It comes with two plossl eyepieces, of which the 25mm one is particularly impressive. It has plenty of eye relieve and a whopping 52 degree aparent field. This renders breathtaking low power (20x) fields of star clouds and clusters. Despite the short focal ratio, the colour abberation is not very bad, and even views of the Moon are pretty free from coloured fringes. What you do notice is the field curvature though, which is pretty evident in this scope. It shows up at the edge of the field, which is less sharp than I am used to with the Apollo 150. This, however, does not take away from the pleasure of looking through this little scope.

Because it is a refractor, it is a very easy scope to use. Plonk down in a chair and you can confortably sit behind the scope and look through it for hours. The 10mm eyepiece produces 50 times magnification, which is great for loads of stuff, including the smaller sized open clusters. Because of its sizeable aperture (102mm is pretty cool for a refractor), at 50 times magnification you can even see a hint of resolution in some of the bigger and brighter globulars.

The finder scope is identical to that of the Apollo 150 and, in one word, excellent. It sits on a very sturdy, long metal bracket, so it is well out of the way when you want to view. It has 2 adjustment screws only and is very easy to line up. The whole finder and bracket comes off by loosening a single screw, making it ideal for stowing the scope away without needing to adjust the finder each time you set it up.

The scope comes with ‘flexible’ slow motion controls. The RA control is continuous using a worm gear but the Dec axis control uses a simple thread and spring construction, which means that you can only adjust a few degrees before you run out of thread. You then need to readjust the scope and turn the Dec slow motion control in the opposite direction for a good few turns to solve the problem. Fair to add, though, that this has not yet caused any problems at all.

It is perfectly possible to take photographs of the Moon using the scope on the EQ1. The half Moon can be photographed at prime focus (camera fixed straight on to the scope) on 200 asa film, using 1/125 or 1/250 second. If you are using a 2x tele adaptor you need to reduce the speed to 1/60. In that case, the Moon fits nicely in the frame.

Anything beyond the Moon, however, requires a motor driven mount. I am aware that there is an RA drive available for the EQ1 but, for my purposes, I simply use my EQ3-2, which has dual axis drives. It is also a lot beefier. The tube of the 102 is so short that it just fits in its rings when mounted on the EQ3. Once it is fitted, it all looks a bit odd, this little scope on the big brutal mount. Because the tube rings are so far apart, there is little space for balancing the tube, and with the camara attached it is all a bit lopsided but the mount is strong enough to carry another counterweight, for which I will need to find a place to attach it to. With respect to the EQ3-2 counterweights, there are two, and the lighter of the 2 just works, as you can see in the picture.

Attaching the camera to the telescope is incredibly simple. As I said earlier, the scope comes with a 2" focuser but 1.25" kit. For this purpose, a 2"/1.25" adaptor is supplied, which also incorporates a T2 thread on the 1.25" end. So all you need to do is get a T2 mount for your camera and there you go. What is also very handy is that once the camera is attached, you can very easily rotate the camera to get the right orientation. The only problem with using the adaptor is that the 1.25" bore is quite long, which results in dark corners on the photographs (called ‘vignetting’). This is less of a problem when taking photographs in the dark, of course, but it is something that I would certainly like to remedy (get a proper 2" photo adapter).

The EQ3-2 has a polar alignment scope which I used for my first session of deep sky work. This seems to work well, as the results are great (see photo of M31). Because the EQ3-2 is so sturdy, I didn't even bother using the "black hat" method in order to remove camera/telescope shake at the start of the exposure. Once I had obtained my target I did, however, let the drive follow the object for 2 minutes or so to make sure that the slack in the gears had been taken up before starting the exposure (although I don't believe in good style, this is apparently good practice).

I don't understand why these scopes are available second hand. I don't think I am going to part with this little scope, it’s too handy for all sorts of stuff and performs exceptionally for its price. Yes, I know that there are some shortcomings, such as the curved field and perhaps some colouring at the edges. Nothing that can't be solved by buying a Takahashi (£1500 without mount) instead :-). Just to see how good the optics were, we used some of Andy's Televue Panoptics and all of the curved field problems were gone - 68 degrees of razor sharp image. (The eyepiece cost more than the telescope.)

So, my verdict is 9/10, 9 because I think that this scope is worth a slightly better mount. For you beginners out there, if you are interested in viewing the planets, be aware that this scope is not particularly suited because of the short focal length. For planetary viewing I would suggest keeping the Evostar 102 in mind (same scope, twice the focal length, EQ3-2 mount, all for around £300).