Much has been written about the Summer Triangle: a trio of the brightest stars from the well-known constellations Lyra, Cygnus and Aquila, that are a welcome sight in summer and autumn skies. In close proximity to the triangle there are some other, smaller, constellations with their own delights to explore.

Delphinus (the Dolphin) is thought to represent one of the messengers sent by the Greek god of the Sea, Poseidon, to persuade a somewhat reluctant Amphritrite to marry him. As a reward for succeeding in this act of persuasion, the dolphin was placed in the heavens. The constellation is marked by six stars of 4th or 5th magnitude, and can easily be interpreted as a dolphin leaping from the sea. There are two very nice multiple stars in Delphinus. The first is marked at its snout by golden-hued 4th magnitude Gamma Delphini. In a telescopic view, a 5th magnitude star is seen about 9 seconds of arc away (an easy split). Different observers report different interpreted colours for the companion star, with reports varying from reddish-gold through yellow to blue! Try it for yourself and see what colour you detect.

Th second, a lovely triple star, is seen very close to the right of Beta Delphini, at the opposite side of the diamond asterism that marks the dolphin’s head. The triple system makes a long thin triangle, and consists of stars that are all 8th magnitude. It is a striking trio of stars, interesting in that they all appear to have slightly different colours. One is white, one yellow-gold, and the third slightly yellow. It is easier to see the subtle colour differences between stars when they are all together in a group like this, as we can then compare them against the colours of the other stars in the field.

Sagitta is another constellation that looks like its namesake – an arrow. Its mythology is uncertain, but it could represent the arrow used by Hercules to slay the eagle that gnawed on Prometheus’ liver, or it could be the one he fired at the Stymphalian birds, or even one fired from Cupid’s arrow! Whichever it is, it is a useful constellation and is easily recognisable.

Mid-way between delta and gamma Sagittae (and a nudge to the south) lies the small globular cluster M71. It was originally thought to be an open cluster, but its globular nature is now more or less established, though it does seem to be a more ‘loose’ globular cluster than others of the type; M13 for example, the Great Hercules Cluster. The cluster is detectable in binoculars or small telescopes, as it has a magnitude of 8.2, but it does not resolve really well until it is viewed in a larger telescope. 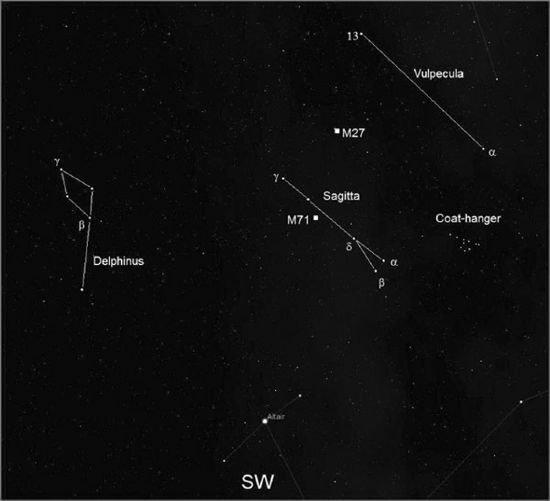 I described Sagitta as ‘useful’ as it provides signposts to two other objects of interest in the area, although technically they reside in the area covered by the constellation of Vulpecula, the Little Fox, not Sagitta. However, most star-charts of today show the constellation as consisting of a single straight line joining alpha Vulpeculae and 13 Vulpeculae. Some charts show a few other stars included and the constellation is then shown as a zigzagging line.

The first of said objects is a very well known planetary nebula, M27: the Dumbbell. The gaseous remnants of a spent star, planetary nebulae sometimes appear as colourful almost circular shapes against the sky background, hence their perhaps-misleading name. The Dumbbell is a classic example, and even in a small telescope it is easy to see the somewhat apple-core shape of the nebula, with different densities and colours of gas being easily seen in larger apertures. The nebula is easily found by centring the telescope on Gamma Sagittae (see, a signpost) and then moving it northwards by three degrees. M27 should then be in the field of view and will be recognisable by its fuzzy, almost circular, non-stellar appearance. M27 also forms a right-angled triangle with Gamma Sagittae and M71 marking the other vertices.

At the other end of Sagitta, the rear of the arrow if you like, performing the same action starting at Alpha Sagittae brings you to a large asterism of stars that looks like a coat-hanger in space. This is known as… the Coat-hanger! It is very easy to see, and is best viewed in binoculars, which give a field of view wide enough to take in the entire shape all at once. Sometimes binoculars are best for this, as when using a telescope the field of view can be too narrow to capture the full extent of the object being observed.

The long bar of the Coat-hanger is about 1.4 degrees long, and the asterism contains ten stars of magnitudes 5 through 7. The Coat-hanger can be spotted with the naked eye from a dark sky site. It was first described in AD 946 as a little cloud, by Persian astronomer Abu’l-Husayn al-sufi, but was later mentioned in the 1920’s by American chart-maker Dalmiro F. Brocchi. It is often referred to as Brocchi’s Cluster – a somewhat misleading name as it is not a true cluster at all - merely a line-of-sight asterism.

These objects are only some of the treasures that are contained in the smaller constellations that trail the larger, more famous ones which contain the Summer Triangle’s constituent stars. It is worth exploring the ‘spaces in-between’ as they often contain some beautiful and thought-provoking celestial objects and the smaller constellations are quite easy to learn your way around.