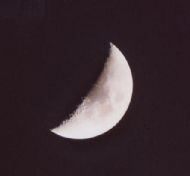 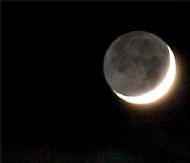 Earthshine 23/03/04 - Eric Walker
A shot showing the phenomenon of "Earthshine" during the early crescent phase of the Moon on 23 March 2004. The shot was slightly over-exposed to show up the large portion of the Moon which is lit by the reflection of sunlight from the Earth.

SW Quadrant 25/10/04 - Eric Walker
A wonderful view of the rays emanating from Tycho. The terminator has picked out the walled plain Schickard and neighbouring crater Nasmyth, itself bounded by another walled plain, Phocylides.

The image was taken on 25 October 2004 afocally through a 114mm reflector with 32mm Plossl eyepiece, then processed using Adobe Photoshop CS.

Schickard, Nasmyth, and Phocylides 25/10/04 - Eric Walker
A close-up of the walled plain Schickard and its neighbouring crater Nasmyth next to the steep slopes of another walled plain, Phocylides.

The image was taken on 25 October 2004 afocally through a 114mm reflector with 32mm Plossl + 2x Barlow lens, then processed using Adobe Photoshop CS.

Aristillus & Archimedes 20/11/04 - Eric Walker
The crater Aristillus in the centre has three mountains of 900m height in its centre. Note the rays extending out from all around it. The large flat-floored, lava-filled crater to its upper right is Archimedes.

I took this on Saturday 20 November 2004 at 1800h UT. Weather was freezing cold (-5°C) and there was a small amount of high level hazy cloud (this stabilised seeing however). 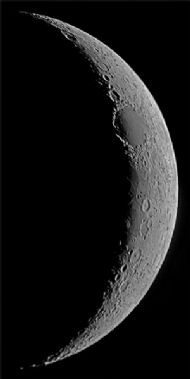 The most noticeable feature is Mare Crisium but several main craters with their mountains, rills, and layered features are also evident. 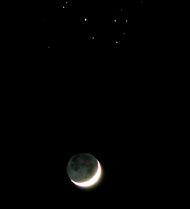 Seven Sisters and Old Moon in New Moon's Arms 04/2005 - Eric Walker
I was trying to take an image of the excellent Earthshine that was on display tonight and when I transferred the image on to my PC I was pleasantly surprised that the Seven Sisters had paid a visit. The Plaeides was only just over 2° from the beautiful crescent Moon.

I took the opportunity of naming the sisters, and their parents, on an accompanying image on my website (I can never remember their names off the top of my head!)

Lunar Apennines and Archimedes 05/2005 - Douglas Thomson
The Apennine mountain range on the edge of Mare Imbrium, with Archimedes (83km) to the left, Aristillus (55km) to its upper right, and Autolycus (39km) below it.
Philips Tuocam Pro2 webcam at 10 frames per sec. Registax 3 used to stack best images.

The large crater Plato (101km) dominates the Northern end of the Mare Imbrium. Immediately below is the isolated wedge shaped Mt. Pico (2400m), to the left of which run the Teneriffe Mountains. The angle of the Sun's illumination has nicely picked out the Straight Wall, just beyond the Teneriffe range. At the end of the curved landscape is the Laplace Promontory (2600m), above which are the craters Maupertuis (50km) and La Condamine (40km). Mare Frigoris can be seen above Plato with the distict crater Fontenelle (40km) with its 1750m high walls. The two craters in lower centre of picture are (L-R) Helicon (21km) and Le Verrier (18km). Both of these craters feature high walls of 2250m and 2450m respectively.
Philips Tuocam Pro 2 webcam, Helios 102mm refractor. Frames stacked with Registax 3.

Stofler in Southern Highlands 05/2005 - Douglas Thomson
Crater Stofler and surrounding craters in the jumble of the central Southern Highlands. Stofler (126km) is the large flat-floored crater to right of centre, with later crater Faraday (70km) intruding from the lower right. Above Stofler is large crater Walter (140km) slightly cut off by the top of the pic. The lunar terminator is running along craters Saussure, Huggins, Miller and others to the left of the pic. Stofler has seen a lot of damage since being formed, having been marked by many smaller, later impact craters. The latest is thought to be the small dark one on the very edge of Stofler (18km). Philips Tuocam Pro 2 webcam, Helios 4" f10 refractor. Frames stacked with Registax 3.

The area southwest of Palus Epidemiarum, or The Marsh of Epidemics. The large flooded crater at top right is Pitatus (97km), and below are the eroded craters Wurzelbauer (88km) to the left and Gauricus (79km) to its right. Left of Wurzelbauer, half way to centre of the image, the small half-illuminated crater with the tiny craterlet on its rim is Cichus (41km- the tiny craterlet is a mere 11km across), and another jump to the left takes us to the mare-filled crater Capuanis (60km) just above centre of image. The old, eroded crater at bottom right is Wilhelm (107km) with the smaller craters around the southwest rim evidence of later impacts. Helios 102mm f10 refractor, Tuocam Pro 2 webcam, frames stacked in Registax. 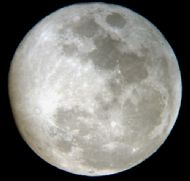 First Moon Shot 11/2005 - Rick Dallas
Near (?) Full Moon, captured using a Skywatcher 127mm Maksutov, and a Nikon 4200 digital camera handheld to a 25mm Plossl eyepiece. Superb picture that shows what a great image can be achieved using the simplest of methods!

The basic image had brightness, contrast and sharpness adjustments made in Photoshop Elements 2.0 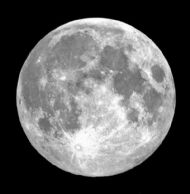 My first moonshot, taken on 15th November, a couple of hours before it reached full phase. Taken afocally through my ED100 f9 APO refractor, using a 32mm Plossl eyepiece and Nikon 4300 digital camera. Image processed in Photoshop Elements and CS (thanks for tips, Eric). 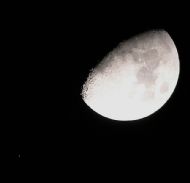 Moon and Mars 08/01/06 - Antony McEwan
Taken at about 7pm on 8th January, showing Mars passing within half a degree of the eight day old Moon. Seeing was poor and it was very cold at Culloden!

Earthshine from Rogie Falls 02/2006 - Les Gamble
Earthshine as photographed from Rogie Falls, near Contin. This area is still blessed with quite dark skies, so the unlit portion of the moon was clearly visible. Half an hour later the view from our house on the outskirts of Inverness was rather sad; you had to strain to see any effect at all!

Earthshine is sunlight reflected off the earth and then bounced onto the portion of the moon still in shadow. Image captured using Fujifilm Finepix S5500, Ľ sec @ f3.1, ISO 400. Photoshop CS2 was then used to brighten, despeckle, de-noise, crop etc, etc. 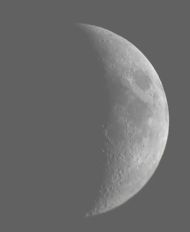 Six day old Moon 04/04/06 - Jeremy Rundle
Taken on 4th April 2006, this image shows the six day old Moon as captured through a 6" Skywatcher Dobsonian! Not a traditional scope for astrophotography, but it is still possible to take images of brighter objects, such as the Moon and planets, with this kind of setup.

Full Moon setting 03/02/07 - Antony McEwan
Taken on my way to work on Sat 3rd Feb 2007, looking over to the west across the Cromarty Firth at about 8am. The full Moon was setting, and the sky was lit up by red and purplish clouds. Used my Nikon Coolpix 4300 to snap this, and tweaked it slightly in Photoshop Elements 2 to bring out the pastel colours.

Snapped this on 21/02/07 at 6.10pm on my way home from work. Stopped in Bruce Gardens and took a chance. Used a very specialised and sophisticated piece of astronomical photographic equipment - my mobile phone!

The crescent Moon is obvious, Venus is below and to right, and below that is the streetlight. Taken with Samsung Z400V phone (2megapixel camera at 1280 x 1024 pixels). No modifications made to image, only resized using Photoshop! 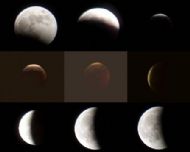 Beginner's Moon Eclipse Montage 03/03/07 - Margaret Greenhow
This montage of images taken during the Lunar Eclipse of 3rd March show what can be done with basic equipment and some patience. Margaret used a Kodak CX6230 digital camera aimed directly into the eyepiece of a 60mm aperture, 700mm focal length refractor.

Many images were taken and the best ones selected for the montage. The final images were adjusted using HP Image Zone software. Very impressive and lots of detail seen on the uneclipsed portion of the Moon.

Lunar Eclipse Montage 03/03/07 - Eric Walker
Reports tell that this picture is a testament to perseverence and dedication. Not only did the photographer deliberately set out to take this series of individual images from a particularly challenging environment (outside a pub on Saturday night) but also that he encouraged other of the pub's patrons to try doing it for themselves!

Popping outside every half hour or so, Eric got these results using a Nikon Coolpix 5700 focused on infinity, set at ISO 100 or 200, f4.2, with exposure times from 1/2500th to 1 second, with lager or single malt whisky to occupy free hand. 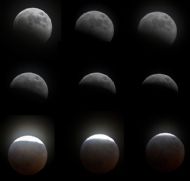 Lunar Eclipse Collage 03/03/07 - Jeremy Rundle
The total lunar eclipse of 3rd March 2007 was captured in a series of photographs taken with a Canon EOS-300D digital camera on an undriven Vixen Sphinx mount. Camera settings were 100ASA and exposure times of 1/100th sec throughout. Minor adjustments were made to the images in Paintshop Pro, then they were combined into the collage seen above.

This meant that less time was spent adjusting camera settings in the field, allowing photographer Jeremy Rundle to spend more time actually enjoying the event itself!

Two photo's take afocally through my StarTravel 102 short tube refractor. The left image was taking through a 25mm eyepiece at 1/125 second F8.0. This was the moon at approximately 10pm with the shadow of the earth covering almost half of the moon. The image on the right was taken using a 32mm eyepiece at 4 seconds f3.6 when the moon was nearly fully eclipsed.

The camera I used was a Minolta Dimage S414 with 4M pixels. I don't have a bracket for afocal photography, so I had to perch the camera on a separate tripod, which didn't work well. Manual focusing turned out to practically impossible this way, so I wasn't able to take any further photographs. 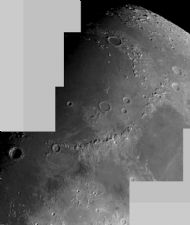 Moon Mosaic: Appenines and Mare Imbrium 18/12/07 - Bill Leslie
Mosaic of lunar images captured using Philips SPC 900 webcam (640x480 CCD chip) modified to fit into ETX-90RA Maksutov. The mosaic comprises four images, each constructed of about 270 frames captured in movie mode at 5 frames/second. The frames were stacked and slightly tweaked using the wavelets function in Registax, and then further tweaked in Photoshop. Photoshop was also used to construct the mosaic, and Levels feature was used to try and match the images to each other and make the joins as seamless as possible. 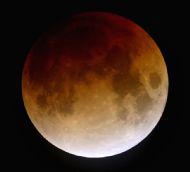 Lunar Eclipse 21/02/08 - Alan Tough
After 2 weeks of high pressure, the barometer suddenly dropped on Wednesday 20th February and the forecast for the eclipse on the 21st was not good. By some minor miracle the clouds cleared and the wind dropped for the start of the event. I saw about 10 minutes of totality before the sky completely clouded over. This image was taken at 3:04 a.m. 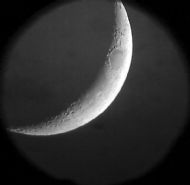 Moon 08/05/08 - Ian Drysdale
This is Ian Drysdale's first image on the gallery, taken on the night of 8th May at about 10pm. The telescope used was a Tasco 60mm refractor, and the camera was a Sony-Ericsson K800i mobile phone, hand held at the eyepiece (12.5mm) with fifteen shots being taken.

The best image was then tweaked in Photoshop Elements 2.0, being converted to grayscale (B&W format) and then constrast and brightness sliders tweaked to bring out the details! 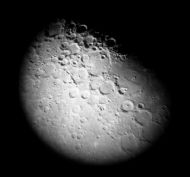 Rupes Recta (also known as the The Straight Wall or The Straight Fault) is a 110km long escarpment between the crater Birt (above it in this image) and the triple crater formation, Thebit, below. Despite the stark shadow in this image the escarpment is not actually very steep, but is rather a shallow rise.

Antony
To return to the Image Gallery homepage click here.