Our neighbours in the solar system. The planets are very popular targets for photography, as can be seen from this selection of images captured by Society members.

This images of Mars was taken using a Minolta Dimages A404 digital camera through a 10mm eyepiece on the 295mm f/6.5 Society Dobsonian Telescope. The exposure was 1/5 of a second. This image was taken sometime in March before the closest Opposition in August 2003. 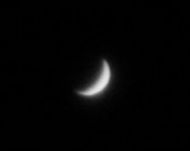 Venus (from Knockbain) 09/05/04 - Maarten de Vries
This is one of the better images I have ever been able to take of Venus. It was taken on the 9th of May 2004. The seeing was not even that great, but slow enough to get the odd reasonably well shaped result. This image is taken with a Minolta Dimage 404 through a 10mm Plossl on my Helios Apollo 150 at 1/5 second. It is a single image with no post image processing applied.

Venus (from Knockbain) 09/05/04 - Maarten de Vries
This is one of the better images I have ever been able to take from Venus. It was taken on the 9th of May 2004. The seeing was not even that great, but slow enough to get the odd reasonably well shaped result. This image is taken with a Minolta Dimage 404 through a 10mm Plossl on my Helios Apollo 150 at 1/5 second. It is a single image with no post image processing applied.

Venus Transit - First Sight 08/06/04 - Eric Walker
After getting up at 4:30am and setting up at Culloden Moor (near Inverness) by 5:30am we had to wait until just after 11:00am to record our first sightings. We even had to endure a very heavy period of rain about 10:30am. It was worth it though!

The images are back-to-front as they were viewed through a 114mm reflector with a 32mm Plossl.

Images were taken (afocal) using a Nikon Coolpix 5700 and cleaned up with Adobe Photoshop. 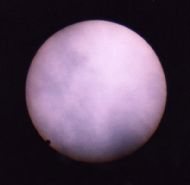 Wispy cloud tries unsuccessfully to block the view as the 'black spot' of Venus heads for 4th Contact during it's egress from the face of the Sun. Taken at approximately 12:05 using a Canon EOS300 film-based SLR through solar filter-equipped Helios 4" f10 refractor. Exposure time 1/500 sec. 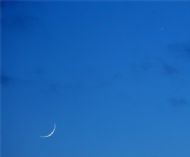 The Moon was only 1.5 days old and 2% disc illumination. Even in the twilight you can see faint Earthshine. Mercury was a mere 3.3° from the Moon shining at magnitude -0.4.

I only got 10 minutes to take my shots as we were in between heavy snow flurries at the time. To make matters more difficult, the Moon was just 7.5° above the horizon and tiny Mercury 10°. 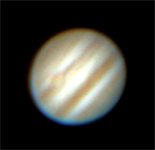 The famous Great Red Spot, a great storm that has been raging for centuries, is clearly visible.

The apparent movement of the Red Spot due to the rapid rotation of the planet can be viewed on my website at http://members.aol.com/astrophotos/jupiterimages.html 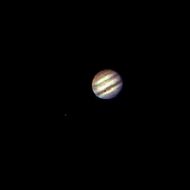 The image was taken at 2315h UT (0015h BST) and shows the Great Red Spot disappearing over the western (preceding) edge, Io emerging from transit (western edge, NEB), Io shadow mid-transit (NEB), Europa to north-west. Note that south is up and west is left. 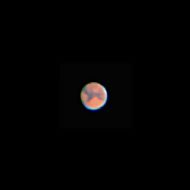 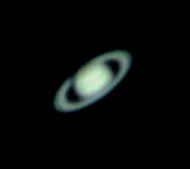 Venus and Mercury 07/02/07 - John Gilmour
Mercury was at greatest elongation (18 degrees east of Sun) on 7th Feb 2007 at 6pm. This picture was taken at 6.15 local time and shows Venus (upper left) and Mercury (lower right) low in the west southwestern sky over Beauly and Muir of Ord. 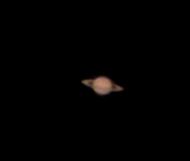 Saturn 10/04/08 - John Gilmour
Saturn taken with my 6in reflector, 3x Barlow and a Meade webcam, then tweaked in Registax. 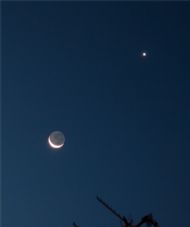 Earthshine and Venus 27/02/09 - Eric Walker
Wonderful conjuction of the new crescent Moon and Venus in the early
evening sky with Earthshine clearly visible.

Taken from Brechin in Angus.

Jupiter 26-27/09/10
This is my second go at imaging Jupiter with a DFK astronomical video camera and 9.25" SCT. The seeing was good enough to let me use a 2.5x Powermate, but I'm still hoping for more stable skies before the winter sets in.

With the 'loss' of the South Equatorial Belt, the Great Red Spot certainly stands out. However, the 'shadow' of the SEB can still be seen. I was also pleased to pick up the North Temperate Belt as well as some dark streaks in the South Polar Region.

Alan
To return to the Image Gallery homepage click here.