The morning of Monday 9th May dawned with a covering of dank, grey mist and gloominess. Despite that, astronomers in and around Inverness were quietly optimistic: the day would clear up and they would all get to view an event they had been looking forward to: the transit of Mercury across the face of the Sun.

Here at HAS we had planned to hold a special observing event, open to the public, at the Jim Savage-Lowden Observatory at Culloden. A team of session hosts was on hand to set up specially filtered telescopes, including our hydrogen alpha Lunt LS60 ‘scope, to watch the event in safety.

The transit was due to start at about 12:12, and by that time the mists had cleared and a variety of telescopes were set up in and around the Observatory compound. Gerry Gaitens and Pauline Macrae had their TAL 100 refractor and Meade ETX 125 ‘scopes set up and the end of the path to the visitor centre carpark, letting visitors to the Culloden Battlefield know what was happening, and enticing them along the path to the observatory itself. Within the compound there were more ‘scopes set up: the Society’s 90mm Maksutov with white light filter, two (not one, but TWO) Lunt LS60 h-alpha scopes, and my own Skywatcher ED80 equipped with Baader Herschel Wedge. Paul Jenkins, Rhona Fraser (with her William Optics 90mm Apo), Pat Escott, James Hitchmough and myself (Antony McEwan) were all on hand to assist, explain and share.

First Contact was clearly seen, followed a couple of minutes or so later by Second Contact, and then the transit became a matter of following the sharp black disc of Mercury drift slowly (to our eyes!) across the magnificent Sun’s disc over the following hours. The Sun had several other areas of interest on the day. Two large groups of Sunspots provided a nice distraction (and comparison), along with prominences visible through the h-alpha telescopes. A third Sunspot group was close to the limb, gradually “coming round the bend” towards us. Against the backdrop of the Sun’s disc in h-alpha wavelength, the scene took on a three-dimensional aspect, which was very rewarding. Other views through various telescopes also gave a sense of the scale and perspective of the event.

We were inundated with visitors to take advantage of the Sunny views! At last count it was reckoned that over a hundred people came to see us (and the transit!) and all were made welcome and treated to fantastic views. Family groups, visitors, Society members, staff from the Culloden Visitor Centre, tourists, locals interested in joining the Society - even lost travellers all enjoyed views of a remarkable and fascinating event, and we were glad to have them all.

The Transit ended with the Sun fairly low over the horizon, but some stalwarts still stayed on to see the very end. The seeing was poor, with atmospheric turbulance making it hard to mark precisely the very last contact, but it seemed to draw a line under it all to stay to the very end.

We would like to thank you all for visiting and making the day a truly enjoyable and memorable one in HAS History!

The image below was taken by Pauline Macrae (HAS) using a smartphone and Meade ETX 125, and shows Mercury in the lower right, with a fantastic sunspot group in the upper left.

The next image was taken by Rupert Smith (astrograph.net) with an APM 100mm Apo equipped with Quark Chromosphere H-alpha system, and shows the kind of view we had through the Society's Lunt LS60THa solar 'scope. 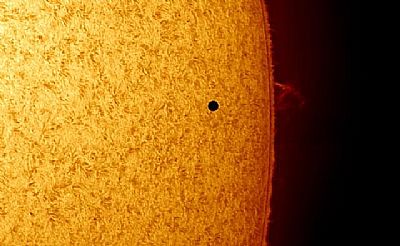 Report by Antony McEwan (HAS)