For weeks I tried to purchase a solar filter for both my refractor and reflector which was simple to use, cheap and 100% safe.

Every supplier I contacted said that even though their adverts stated they did filters to fit most telescopes, due to a "lack of interest" they did not stock them and would find it almost impossible to order them.

Never one to quit, I decided to make my own.

The most important points for me (apart from being 100% safe) were:

1.  Ease of use
2.  Portability and storage
3.  Simple to replace should it become damaged (hence the use of Baader film)

I therefore set about this project, which turned out in the end to be fairly simple.

First, obtain a Cokin medium format filter holder, which comes supplied with a most essential lens cover and case; cost about £12. Only use Cokin as certain camera shops sell filters which are not useable because they are not flat on the side, but rounded as in Photo 1, which means they cannot be mounted square onto the lens hood of the scope.

Constructing the filter is simple. Chain drill out (Photo 2) the central portion of the filter cover and discard, then smooth off all rough edges (Photo 3).

The Baader film will be secured to the cover with strong double sided carpet tape. Photo 4, shows carpet tape on cut mount ready for the film. Photo 5 shows the completed assembly.

This means that in future the film can easily be replaced by simply removing the old without the need to replace the whole filter unit, which can be used on many different telescopes.

Now simply slide (with care) the adapted cover into the holder until it 'click stops' into place and you are ready to mount it to the telescope. Photo 6 shows mount without filter inserted.

Mounting is done with Velcro pads, which are cut to fit from a 20x10cm piece, obtainable from most fabric shops. One part of the pad, preferably the hook side, is placed on the telescope lens hood and is cut wider to avoid it coming off when pulled apart. Photo 5 shows the other side of the Velcro wrapping round the filter side for added security. The filter can be attached and removed as needed.

Both of my telescopes were supplied with suitable filter apertures in the dust caps already. Obviously, if yours is solid you'll have to cut a suitable hole yourself. Make sure it's off axis for a reflector/SCT/Mak or you won't see much!

You can store the Cokin filter in a Cokin box or, if you are concerned about damaging the film when removing the holder, make a box to store it in.

That's it, complete - and it works.

This may sound expensive but it means you could replace the film ten times, whereas a commercially bought Baader film filter, if available, would be £40+ on its own. The leftover film could also be used for those holiday binoculars and still leave plenty for replacements. 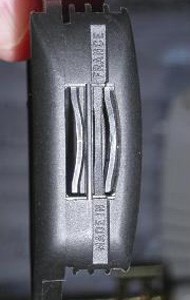 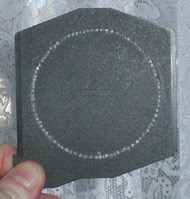 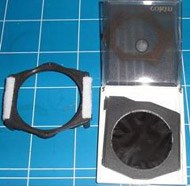 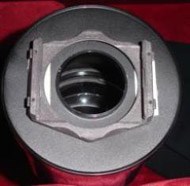