“King of the Gods, Ruler of Olympus, Patron of the Roman State”

High praise indeed, but fitting for the largest and most massive of all the planets in the Solar System.

Jupiter is nearly 2.5 times the mass of the other eight planets in our solar system put together, has 318 times more mass than our puny Earth, and spins on its axis faster than any other planet (one rotation every 10 hours or so). If Jupiter was hollow it could fit more than 1,000 Earths inside. It is sometimes described as a failed star, having all the right ingredients, but would need to be 80 times more massive to be defined as one. This behemoth has the largest diameter a gas giant can have – any additional matter which you fed into it would be compressed by gravity rather than adding to the planet’s girth.

Jupiter bears the name of Rome’s most important god (Zeus in Greek mythology) and has the largest family of moons in our Solar System, its members named after Jupiter’s lovers, descendants and attendants. 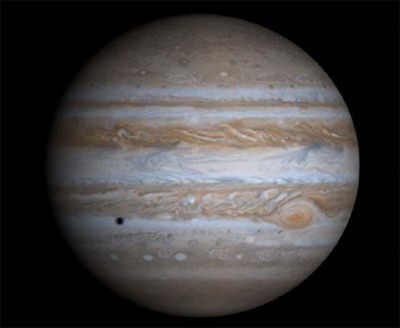 Jupiter is normally the fourth brightest object in the sky; the Sun, Moon, and Venus always being brighter, although Mars can sometimes outshine it. It is brighter than magnitude –2 and currently (May '06) shows a disc size of about 45 arcseconds, which means it is easily visible in the current dark skies and even in twilight skies in early spring. From Inverness, Scotland, on the 1st May 2006 Jupiter rises at 21:00h BST and transits (passes due south) at 01:30 the following morning. These events come just over one hour earlier each successive fortnight, so that by the 21st May Jupiter is passing due south at the very reasonable time of midnight - so there’s no need to stay up to the wee small hours to see the king of the planets!”

Below is a screenshot showing the position of Jupiter near the South meridian on the 1st May 2006. Note it is fairly low in the sky, only 18 degrees above the horizon, but still easily found with the naked eye in the heart of the constellation of Libra. Although its inherent brightness will make Jupiter easy to find, its low position in the sky this year will make it difficult to observe telescopically - at least at high magnifications. This is due to the atmospheric distortions we see when viewing objects close to the horizon. We are looking through a much thicker layer of atmosphere there than higher in the sky, so bright stars and planets tend to twinkle and dance about. All is not lost though, as low to medium powers can still be used productively, and some nights can always be better than others! 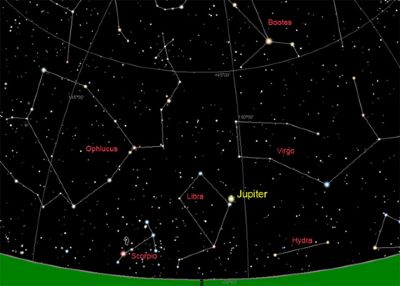 Jupiter’s four large satellites, the Galilean moons Io, Europa, Ganymede, and Callisto, were first seen in 1610 by the Italian scientist Galileo Galilei. These moons are easily observed today using binoculars and appear as small dots of light on either side of the planet. These moons are fascinating as they appear to change position over only a few hours as they orbit the planet. Sometimes it looks as if one or more of the moons disappear as they pass in front of or behind Jupiter, or are lost in the giant planet’s shadow. Take the opportunity to view the planet and its moons over several nights and their orbital motion will become quite apparent.

There is an excellent JavaScript utility on the Sky and Telescope website which shows the positions of the four Galilean satellites for any date and time from January 1900 to December 2100. 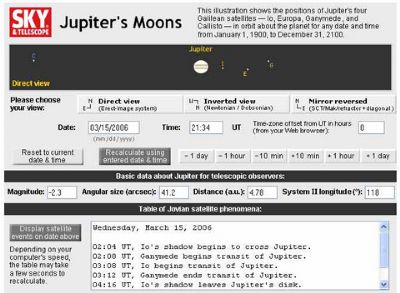