The June meeting was an absolute blockbuster! It was nearly standing room only – and for good reason. As well as the lure of a great talk about Stars in their Death Throes there was the promise of an auspicious update on the new observatory! There were quite a few new faces too, as well as some that had been long absent and chose an excellent night to make their return. To start it all off, the notices were read out by Chairman John Gilmour:

The Universe is a Garden

After the notices, Arthur extended an invitation to any members or their friends who attend the opening day event on the 21st June. Arthur and Lorna will be opening their garden to the public, allowing them to meander through its large and varied enticements, whilst enjoying refreshments and considering what plant purchases to make from those donated by Simpsons garden centre. It will be a great way to wind down after the excitement of the grand opening, and you can use the opportunity to talk astronomy, gardening or both (or even quantum mechanics, engine efficiency or flight characteristics) in a relaxing and beautiful environment.

The garden will be open from 1pm until 4pm and there will be an entrance fee of just £1, which will include refreshments. The garden and house are at ‘Dunbarney’, Myrtlefield Lane, on the B9006, which is just at the very edge of Inverness on the way out to the observatory site, exactly two miles from both the Culloden Battlefield and the Inshes Roundabout.

Arthur asked that everyone feel free to pass this information on to all their friends, astronomical or horticultural, as all would be welcome.

The Main Event
‘ Stars in their Death Throes’ by John Eldridge

John Eldridge has a PhD in astronomy and has spent several years researching the progenitor stars of supernovae. He started off at Cambridge University, before working in Paris on long gamma ray bursts and then Belfast on supernovae. He has now finally returned to Cambridge to continue his work and be with his fiancée. He also happens to be HAS Chairman John Gilmour’s sister’s nephew!

John started his talk by telling us up front that he is a theorist, not an observer. He therefore doesn’t see stars as pretty twinkling orbs, but rather as lists of chemical compositions and formulae. He demonstrated this by showing us such a visual representation of a main sequence star – as a theorist would see it!

His work involves creating and using computer models that show how stars evolve and what happens to them as they do so. Naturally at the end result of a star’s life is its death, and John is particularly interested in how the death throes of stars are detected, recognised and monitored.

He told us that the star we know most about is our own Sun, so it is the Sun that all the other computer models are compared against. Star formation was mentioned and some diagrams shown. It was noted that stars tend to form in clusters, which may or may not then separate out as time progresses and outside influences come to bear.

In stars up to eight times the mass of the Sun the final stage of a star’s life will be spent as a red supergiant. A slide of Betelgeuse in Orion was shown, as a perfect example. To reach that stage, the star will have spent millions of years ‘burning’ through its original store of hydrogen. Fusion is the chemical process that takes place, and converts the hydrogen to helium, releasing some energy in the process – hence the light and heat produced by stars. Once the hydrogen is all gone, the helium burning takes place to produce carbon, and eventually oxygen, silicon, and a few other elements are produced before the core becomes mostly iron. At each stage energy is released and the physical properties of the star change.

At the end of its life, the star may consist of a relatively small (but massive) iron core with a vast envelope of expanded material surrounding it. At this point no more energy can be released, so the iron cannot be ‘burned’. With no more outward pressure the star implodes, releasing an enormous amount of energy, which expels the star’s outer layers, causing the star to shine much more brightly than before – but only briefly. This is a typical supernova event, and the fate that awaits Betelgeuse. We were assured that Betelgeuse is at such a distance that the explosion will not cause the Earth any damage, although the star will be visible in daylight for a while!

On the subject of Betelgeuse, John showed a Hubble Space Telescope image of the star that plainly showed it as a defined extended object, not a single point source! This in effect means we can see Betelgeuse as a disc rather than a point of light. Amazingly, the image seemed to show a hot-spot or bulge at one edge of the disc. Betelgeuse is the only star apart from the Sun that we can see this level of detail on visually – at least for the time being.

Several famous supernovae were represented in John’s presentation, including SN1987A in the large magellanic cloud, and the galaxy NGC2770, known as a supernova factory because of its preponderance of supernovae in recent years! Three have been detected there so far.

SN1987A is a very famous supernova, but at the time it presented a problem for astronomers, in that it appeared not to be a red supergiant, but a blue supergiant! Observation of a triple-ring nebula that had surrounded the star for several thousand years before it exploded prompted the formulation of a complicated theory to explain the phenomenon. It suggested that the original star had developed to red supergiant stage, then merged with a companion star, drawing mass away from it and causing the original star to change to a rapidly spinning blue supergiant before it went supernova.

Alternative theories do exist though, including one that suggests the star was in a rare class of unstable blue supergiants, known as luminous blue variables. These eject material from their surfaces several times before ultimately exploding as supernovae. This would also explain the three ring nebulae that existed before the supernova explosion.

Detection of supernovae was discussed by John, and he showed images taken by large ground based telescopes as well as the Hubble Space Telescope, which showed ‘before and after’ shots of areas of the sky where supernovae had occurred. Actually, ground based telescopes that use adaptive optics can give better results than the HST, which was a surprise! M74 was a fine example. Guide star comparisons are a very useful way of pinpointing exactly which star in an image has gone bang. In the ‘after’ image, the supernova can cover up several of the surrounding stars in the immediate area, so a number of surrounding stars are used a markers. When the ‘before’ image is superimposed over the ‘after’ image, these markers are lined up precisely over each other, and it becomes easier to detect the progenitor star.

There was a lot more in John’s presentation, much of it quite complex and grounded in science, but he put it across very easily and made it a pleasure to listen. He also had a discussion group after the tea break, which further explored some of the ideas he had opened up in the presentation.

So a big thank you to John Eldridge for a great explanation of how supernova detection and analysis is carried out.

This month’s information handout was all about the Mars Phoenix Lander, NASA’s latest surface-bound mission to Mars. It landed successfully and has been delighting researchers with more and more images of Mars, this time of the cold northern arctic plains where it is hoped further evidence of the underground deposits of Martian water-ice will be found.

The handout was made up of information taken from the following website, so to see it for yourself just click on the link: http://phoenix.lpl.arizona.edu/

After the discussion session following the tea-break, many of the members present decided to go on an impromptu field trip to see the progress being made at the new observatory for themselves. It was a beautiful evening with a dusky red sunset illuminating patchy cloud in the west, and against that backdrop many of them got their first view of the nearly completed HAS JSL observatory (Mk II).

The observatory dome was complete, and closed, so that with a little imagination we could think of the project as finished! Though there was no telescope inside the dome at that point the building looked the part, with the white of the classic dome shape contrasting brilliantly with the wood of the observing station nearby and the red sunset behind.

Naturally everyone present was excited and impressed, particularly those who had not been to the site before at all. By the time we all dragged ourselves away, the red afterglow of sunset had given way to a patchy tantalising nightfall. We can only hope that once the observatory is completely functional and in operation, that it continues to draw such enthusiastic groups of members as it did on the night of Tues 3rd. 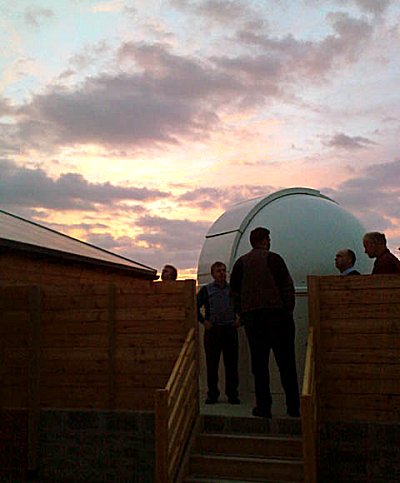 Members milling around the new attraction

Next Time. The next meeting will take place on Tuesday 1st July, when we’ll have that illuminating talk about the Sun’s effects on the Earth from Duncan Lunan. I can tell you now, there WILL be a HUGE amount of news about the new observatory! Of course, we also hope to see you before the next meeting, both at the promotional event in the Eastgate Centre on 14th and at the grand opening at Culloden Battlefield on 21st.

Until next time, clear skies!